Over at my CollisionPoint blog, I've started to explore the Commoner format of Flesh and Blood; and in doing so, I am amazed at the power some heroes can attain even without their most expensive and effective cards.

Rhinar, the intimidating youngling from the Savage Lands, is poised to be a force in Commoner. He can unleash outrageously tall attacks that threaten lethal in the early parts of the game, or play more of a midrange game by exchanging value for value with critical blocks and his trusty Romping Club. 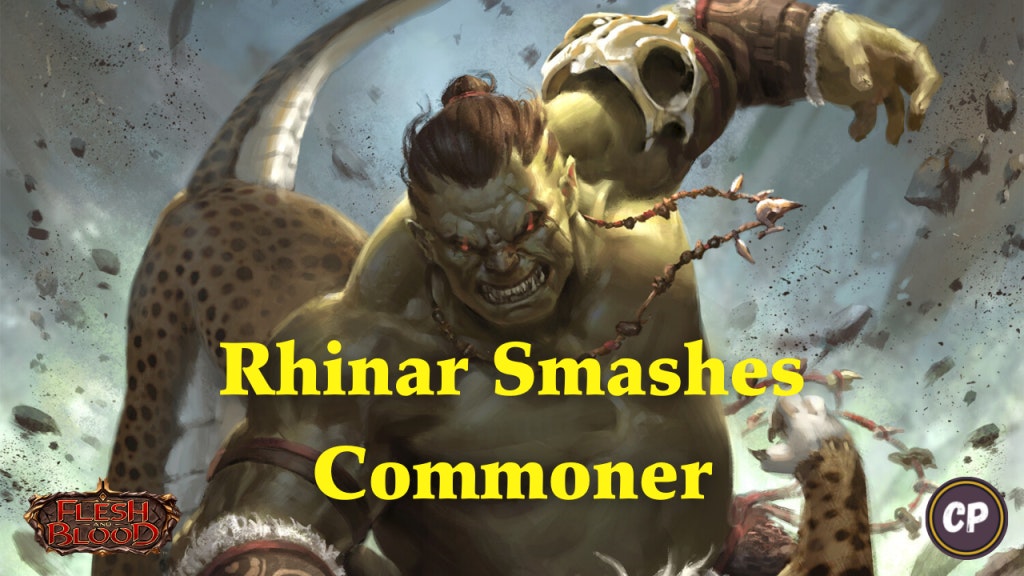 Selecting your equipment in Commoner involves some of the most critical analyses in your entire deck. Here's how I broke down my inventory.

Heartened Cross Strap was recently banned from Blitz, so we should definitely note its power level in Commoner. This is well utilized on turns when we don't have the cards in hand to pay for our attack. Goliath Gauntlet, on the other hand, is for that turn where we go all in on an attack- perhaps on the back of a double Intimidate! These are the pivot pieces for the deck.

We'll also want to consider all the Iron available to us, as well as Barkbone Strapping. For my personal list, I the equip Ironrot Boots. However, you'll want to mix and match some iron scraps depending on your current meta.

To try and correct the variance factor in a quick Commoner game, I've elected to also bring one of my favorite pieces of equipment spice that Commoner has to offer: Ragamuffin's Hat.

Rhinar does a lot of discarding from his hand to Intimidate his opponent and drive his pilot mad with an unexplored gambling addiction. Sometimes we win more with the optimal random discard, while other times, we ruin our desired line of play.

Ragamuffin's Hat can fix that scenario by fixing that last card in hand that we need to pay for our arsenal attack or club swing. I've also used the hat after blocking with 3 cards from an all-red hand in hopes of finding a yellow to pitch for a club swing.

Bits of bone. Scraps of iron. Branch of wood. Strips of leather. The Romping Club is the Brute's iconic weapon of choice. Handcrafted in the jungles of the Savage Lands, Rhinar wields his club, his natural strength, and his will to survive against the world of Rathe.

For this Rhinar list, I focused on a few guiding principles:

New to Rhinar, the Brute class, and the Intimidate mechanic?
Read up on the basics with our FAB101 series!

We never plan on playing our 3-cost attacks- we're only running 2 blue cards- so these are here for pitching, blocking, and discarding- all will trigger Rhinar's Intimidate.

In a 20-life or fewer game, pumping Brute attacks can quickly bring your opponent into lethal danger. We run 2 copies of 3 separate pumps to make some savage gains: Bad Beats, Awakening Bellow, and Primeval Bellow.

In the Savage Lands, you're playing the odds with your life. With Bad Beats, we have a 50/50 chance to nearly double our attack's strength for the cost of a card out of our hand. It's a bet that's worthwhile in Commoner.

Awakening Bellow is a costly pump for this deck. Usually, we're only pulling this off with a full grip. Playing it does yield several benefits, so it has earned its spot in the deck.

With a 3-card hand, we can play Primeval Bellow, get an intimidate trigger from the discard, and pump our club up to 9 attack power.

While Brute doesn't generate many hit effects, some of our cards can enable some secondary effects to help claw us to victory.

Double Calling champion Michael Hamilton wrote about a novel way to evaluate cards in a recent Pro Series article for Rathe Times subscribers. I highly recommend giving it a read.

Predatory Assault can give itself Dominate thanks to some precise play lines from this deck. Ideally, you want to see this card after gaining go again from Wild Ride or after it survives the discard from Primeval Bellow. With this card at its full potential, your opponent will have no way to cover up the damage or survive your onslaught.

Pummel is an additional no-brainer for this deck. Bringing it over the top of an attack action can leave your opponent with few options in response, and tacking it onto the Romping Club can help close out the game early on.

Rhinar was able to strut his stuff a little in the most recent Skirmish season. Now, I hope that I have shown you the power he can bring to the Commoner format. Romp away, my savages, romp away.

Please consider supporting me on my new Patreon campaign. Check me out on YouTube alongside my brother on our channel: Flesh and Blood Brothers. Share this content to your local pages, channels, chats, etc. And leave a comment wherever you find this! Thanks for reading!

It was such a pleasure writing this. I hope you enjoyed this piece and give the deck a shot!

This has me excited to try commoner! I'll give the deck a shot.

Let me know what you think!

You just saved my life, guys! I just (literally one week ago) discovered FAB with some friends and tomorrow we have our first (Commoner) tournament. Obviously I did not know where to start and this article made so much sense and looks pretty amazing to me (1-week Brute experience player)! I will buy those common cards and give it a try! I will edit this post to let you know the result. Thanks again!

Good luck! And welcome to the FAB community. (:

Bolistadete, I'm sorry I didn't see this earlier. Welcome aboard! Feel free to reach out if you have any questions.

Yet to test out, but while building, I've already replaced "Brutal Assault" with "Stony Woottonhog", the same cost/pitch value and has a chance to prock effect to give +1 making it a 7, while "Brutal Assault" is just base 6, as both of them are generic as well, the deck wouldn't be adjusted much. Also thinking of maybe swapping in additional yellows instead of "Fate Forseen".

You do lose 1 defense per card, but guess you have to take that into account.

Clay takes a critical look at Scabskin Leathers, using probability to explain when and why you should choose to roll.