My journey into the Savage Lands began with hesitation. As I stared at the Brute card pool, red flags kept leaping from the text boxes, words that gamers have learned to avoid: Random. Discard. Roll, Rhinar was an agent of chaos, and I wasn't ready to embrace that.

But Rhinar has a plan. It just doesn't involve self-preservation.

It's obvious what the deck is trying to do. In exchange for big attacks, Rhinar discards cards, cutting into his hand, his deck, and his options. But while the general concept is easy enough to grasp, the actual impact of that reckless strategy takes a few games of Flesh and Blood to really understand.

In a typical Brute hand, every card has a distinct role:

Knowing the role each card needs to play is key to successful hand management.

It's worth noting that most Brute cards defend for 3. This lets you decide how to defend based on a different criteria: what you want in your hand once it's your turn to attack.

Pro Tip: Beginning with Monarch, Brute began to receive cards with no defense value. As you're deck building, you want to be especially judicious with each inclusion of these non-blocking cards. They tend to have very appealing effects, but drastically reduce your options for going on the defensive!

With the amount of damage a Brute throws, they can typically afford to take some too. Partial blocks are usually enough to take the edge off the opponent's attacks while priming your hand for your attack phase.

The defense is key. Rhinar is good at defending, and he needs to do it, because defending is actually how he controls for the word 'random'. See, Rhinar knows that 'random' only matters if you have choices. And choices mean you haven't committed.

Rhinar is capable of several attack patterns, but the most ubiquitous is a single, large attack bolstered by Intimidate, an ability that reduces defensive options for your opponent and makes Rhinar's attacks harder to block. Intimidate takes your basic assumptions about Brute strategy- that it's ruled by the unforgiving favor of Lady Luck- and inverts it; now it's the opponent's defenses that are dictated by RNG.

Brutes tend to skew toward higher damage output on their attacks, and when you take Intimidate into account as well, they force opponents into situations where they either take a lot of damage or they block with cards they'd rather have for their own attack phase.

But while those attacks- and the Intimidate mechanic that Rhinar epitomizes- are the first things that jump out at you, perhaps the more significant play available to Rhinar is the setup of a Non-Attack Action card. It can be a little card intensive to get one of these buffs out ahead of an attack action card, and occasionally that ideal hand will come along that compels you to skip defending. But note that most of them do not specifically require an attack action card, allowing you to combo them with Rhinar's weapon for a reliable (and less card intensive) attack.

All together, the Brute class brings an impressive array of aggression to the table. Of course, this comes at a steep cost- and that cost is paid on two fronts.

All decks have to be built with Pitch in mind, striking a delicate balance between power and resources. In most cases, that -1 damage for +1 Pitch value is an equitable exchange.

Brutes, however, have a floor. Because many of their effects (including Rhinar's hero power) rely on a 6 or higher attack on a discarded card, an increase in Pitch value often renders the card useless for discarding.

And yet, Brute attacks are expensive. Even swinging a weapon costs them 2 resources. Brutes need to work Blues and Yellows into their decks wherever they can. And when you draw into a card with a good Pitch value, that card's role is preordained.

As for the other cost associated with Brute attacks...

The Savage Lands have taught Rhinar not to get attached to things. To follow his instinct. To take the opportunity presented to you now, rather than waiting for the 'ideal' opportunity to come to you later.

The discard is as much a strategy as a sacrifice. As we said above, discarding triggers Rhinar's Intimidate, a key part of what makes a Brute attack so hard to defend. And while the discard is technically random, by the time you've gotten to it you should be down to 1 card and know exactly what's getting discarded.

And yes, that card you discard is probably one you'd have liked to use (that's why it's in your deck, after all). But sacrifices must be made. What matters more than 'did I play all my best cards?' is 'did I defeat my opponent?' When you're throwing attacks for 6+ damage while stripping your opponent's hand of random defensive options, the game shouldn't last long enough to notice your deck is diminishing faster than theirs.

There are a few cards with triggers when discarded. Just be careful not to burn yourself too badly with Beast Within!

The full Brute ensemble provides moderate defense that you can use without sacrificing the equipment's abilities. The effects they bring to the table are all about making the most of opportunities. Barkbone Strapping generates resources, Scabskin Leathers could possibly grant extra actions, and Skullhorn creates another discard opportunity to trigger Rhinar's Intimidate. It's not uncommon to go an entire game without using any of these abilities, but when a huge turn is held back only by a lack of resources or a shortage of action points, you'll be glad the gamble is available to you. On that note, the Gambler's Gloves were made for improving Rhinar's odds at dice- though if you're feeling lucky, you can get a lot of mileage out of Skull Crushers before they break to a bad roll!

The Romping Club is the weapon of choice for most Brute decks. It reduces the hand required for a solid turn from 3 cards to 2 (a buff and a yellow card to Pitch); and like all weapons, it's an attack that doesn't drain the size of your deck. When Rhinar gets the chance to throw a second attack in a turn, the Club is there for him.

The Mandible Claws have risen in popularity among Brute players for explosive combo turns. They aren't used often in a game, but on the turns when their combos come online, they're a major threat.

We touched on the power of Brute buffs earlier, but Barraging Beatdown deserves a special call-out for being perhaps the most perfectly honed card in the Brute repertoire. Unlike most of the class pool, Barraging has no cost whatsoever: it plays for free and it requires no discard. It also Intimidates immediately- the opponent is now down to 3 cards to defend with. And the +2/+3/+4 can be applied to a Brute weapon just as well as a Brute card. While Barraging Beatdown's buff can be neutralized by a robust defense, you sort of win either way: they take a ton of damage, or they drain their hand blocking. (If you manage to Intimidate two more cards this turn, they may not even have a choice.)

Bloodrush Bellow doubles down on the basic premise of the Brute hand, hopefully scoring you an extra Intimidate and a nice damage modifier. Prepare your hand for it like any other Brute turn, then play, Pitch, and discard into a hand reset and some nice aggressive bonuses. Try to pitch extra resources alongside Bloodrush Bellow, as you'll be a little shorthanded following up. Note that this card's buff applies to all Brute attacks this turn, making it an incredible value for a wide Go Again strategy- and unlocking the true potential of the Mandible Claws!

Primarily a method of cheating out another Intimidate, Sand Sketched Plan does technically act as a tutor- but with the added risk that you may just discard that card you sought out! If you're at all at risk of not getting your 2 actions out of the discard, don't chance it- use this as your Pitch card.

At first glance, Swing Fist, Think Later looks like pack filler. At the cost of a resource and a discard, you get low attack with Go Again. But the blue cycle of SFTL is an unexpected MVP as a designated Pitch card that transitions into an inconvenient opening attack late game. The 1 cost means you can Pitch a blue and have 2 resources remaining to follow up; and since it's discarded a card for you, that boosts the damage on the most likely candidate for 2nd attack: the Romping Club. It's not always about power; sometimes, it's about synergy.

As the game has expanded, Brute moved beyond the need for a 3-card hand via attacks that draw before discarding. This adds to the random chance of failure, but gives you much-needed flexibility. Pulping stands to gain Dominate if your discard goes right, at which point its conditional Go Again is guaranteed. Pulping transitions perfectly into 2 swings with the Mandible Claws, if you can afford the cost!

A sideboard option if ever there was one, Argh... Smash! is a targeted counter to Dash the Mechanologist (and any other class that may take up extensive use of Items in the future). The cost to play it is a bit steep, so I wouldn't recommend playing it without the opportunity for a big payoff- and you'll want to have those Gambler's Gloves ready!

The chief advantage of Bone Head Barrier is how abstract its defense is. "Prevent the next X damage" means standard damage or arcane damage, dealt by 1 attack or by the next 6 attacks, reducing damage until all the reduction is used up- or the end of your turn.

While Reckless Swing may look like a costly defense, it should be viewed as an off-tempo finisher. So often games come down to the wire, and the enemy has gone into full defensive mode. A well-timed Reckless Swing can end the game. 'Well timed' may sound like another way that Rhinar depends on Lady Luck, but Reckless Swing is also a Blue card- ideal for Pitching! And Pitching sets up your late game hands. And late game is when you want to draw this card. Is it becoming clear yet? 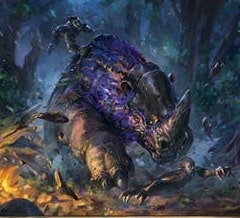 The path through the Savage Lands is an eye-opening experience, and Rhinar an unconventional tutor. But once you learn to let go of the possible, instead embracing the power of presence, you'll find that the Brute version of mindfulness has its merits.

"Nothing quite compares to the snarling roar the brutes unleash when they feel that their territory is threatened." Rhinar in Commoner is a force to be reckoned with.