Drew Cordell shared with us his showstopping design for competitive Bravo last month. (That article is essential reading before heading into this one.) His build was designed to combat the threat of Chane. In this article, Drew takes aim at another heavy presence in the meta- Prism- as he attempts to round out Bravo's matchups for the Road to Nationals events. 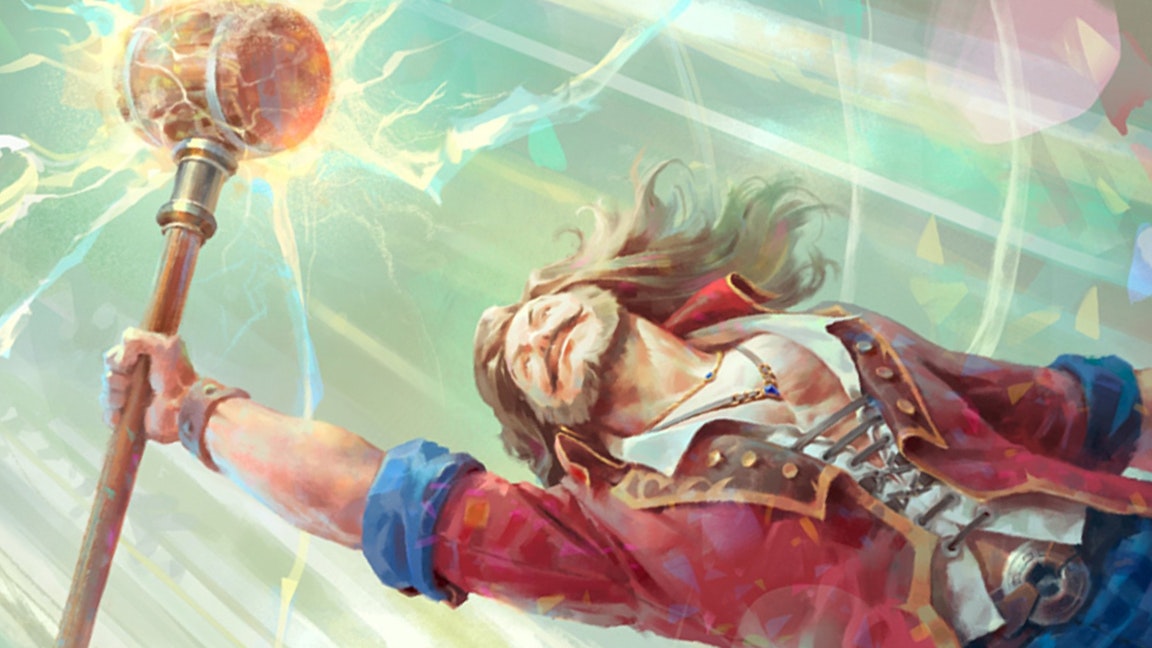 I’ve been hard at the grind with my Bravo Classic Constructed list ahead of Road to Nationals. Unsurprisingly, Bravo has been putting up excellent results across the RtN reports, remaining one of the top contenders in the format. With a great mix of defensive and offensive tools, Bravo is able to do exceedingly well against many different decks.

Frankly, while my defensive & reactive ‘toolbox’ deck list was doing quite well against Chane, Dorinthea, and Katsu, it's been struggling against Prism's Aura variants that have emerged since I wrote my last article. In fact, that matchup was borderline unwinnable; in my 20+ games of testing against Aura Prism, the win rate was bad, with almost half of all of my games against Prism going to time in the round. Despite how well my deck was doing against all other major contenders in the format, the Prism matchup was simply unacceptable as I continued to explore and test the deck.

The meta is continually changing, and I’m closely watching the results of Road to National tournaments all over the world to get a better understanding of what each class is trying to do. I suspect my decklist will continue to evolve over time as the meta shifts.

Pro Tip: One of the best things you can do as a competitive player is to remain vigilant about updating your decklist! You should always be on the lookout for changes in the meta, looking to improve your outcomes against emerging trends and identifying your weakest cards. A truly competitive decklist is never finalized!

There were a number of proactive cards and gameplans that Guardian has access to, many of which emerge from what Guardian is trying to do in the Blitz format.

Against Prism, not being able to deal with an early Great Library of Solana by simply not having the yellow count to support it was creating an oppressive matchup. I found myself wishing for more yellows in the deck every time the Library hit the table. To combat this, I upped the count of Righteous Cleansing (some great tech against Prism and many other decks in the format), and went out of my way to include three copies of Disable (Yellow).

Zealous Belting (Red) has been an all-star against Prism in fixing my win rate and creating a game plan that can better withstand the onslaught of go-wide pings. This gave me the ability to pressure early and often against Spectral Shields while also holding back the resources to swing Anothos into a Spectra aura before they can stack and get out of hand. In this matchup, Zealous Belting remains a high-priority target for Remembrance as the game draws on. Because it only costs two resources, Zealous Belting is a great Pummel target to try to force out some discards with the on-hit effect.

Against decks that aren’t Chane/Prism, I have opted to go with the Mage Master Boots/Tome of Fyendal combo to gain a lot of life, draw cards, and do something else big on the same turn. Time Skippers remain a must against Prism, and Nullrune Boots can be extremely helpful against Chane on big turns where the Chane player stacks a lot of Seeds of Agony or other sources of arcane damage. This combo can net a lot more value than the single point of defense from Ironrot Legs, and isn’t too difficult to pull off.

Kano has not been making many appearances in Classic Constructed, and though I’m hesitant to do so, it does make sense to drop the extra Nullrune protection in favor of more sideboard cards in the main list. With these changes, the main deck, excluding equipment, grows to 73 cards, with up to 13 cards that can be removed in any given matchup. Of course, if Kano players start to emerge to exploit the lack of Nullrune in the format, it will be time to cut some cards from the main deck to have that protection plan in place.

To make room for more of those essential yellows and the new reds, Exude Confidence was cut from my list. While Exude Confidence remains a powerhouse of Guardian (especially in Blitz), removing additional blue cards and adding more yellows does create negative synergy. Exude Confidence does little to bolster our position in the game if we are already behind against Prism.

Blessing of Deliverance (red) was cut to support more proactive life gain against Chane via Sigil of Solace (red). Of course, Blessing of Deliverance has tons of additional utility with being able to set up a 6 power Anothos swing, but in games down to the wire against Chane, the guaranteed gain of three life at instant speed can be essential. Sigil was primarily a tool used in Blitz when the extra life gain represented a much larger percentage of total health, but its merits cannot be overlooked against Chane.

Stonewall Confidence was a great tool against many go-tall decks of the format, but at only two cost, it simply did not support the strategy of the deck as it evolved. With the most recent changes, this defense-heavy card creates some negative synergy with the proactive gameplan we are trying to establish in the games where this card was previously a great choice.

I was enjoying Forged for War in many matchups, but ultimately it needed to be cut to support more offensive yellow tools in the deck, including the additional copies of Righteous Cleansing and Disable. This further supports our strategy to become a more proactive deck and lead the charge with some offensive attacks from the start, rather than just sitting back, blocking out, and thinning the deck so we can chain back to back Crippling Crushes in the late game.

Mangle is a card that I will miss greatly, and I am looking to find a way to reintroduce to this deck. It’s criminally undercosted at four resources, and its only real drawback is that it is a red pitch card. Unfortunately, it had no value against Prism other than raw numbers. Though it's an excellent addition against many other decks, it was cut to further streamline the matchup against Prism without sacrificing any other matchup.

Love what you're reading? Why not join the Rathe Times as a subscriber? Subscribers get access to all Pro Series content (currently 29), written by some of the best players and authors this side of Rathe! To subscribe, head to the FaB DB patreon page and select a Supporter+, Majestic+ or Legendary+ tier.

Here's what Bravo's deck looks like after the adjustments noted above.

View this deck on FABDB here.

Taking a proactive approach against Prism is ideal for our strategy, otherwise the match is close to unwinnable. Against non-Prism decks, however, we play a standard, although more proactive, Guardian game plan as outlined in my Pro Series article published early last month.

Against aura Prism, if your opponent spends resources to drop a Spectra aura, start the turn by getting aggressive and coming in with Zealous Belting targeting them directly; if we use this attack to try to hit the Spectra aura, the go again text will not resolve. Don’t be afraid to Pummel this attack to push some damage through and break some Spectral Shields (even if your opponent has Merciful Retribution up and you will potentially take some damage when the shields pop, so long as you are healthy enough to not worry about the damage). After the Zealous Belting, use your hammer to clear out the Spectra auras.

In other matchups, Zealous Belting can be used as a means to be more aggressive and swing for larger amounts of damage each and every turn while still allowing us to have the defensive and utility tools to sustain ourselves in the fight.

These changes do not invalidate the strategy or considerations of my previous article, just represent the next iteration designed to handle the ever-changing meta as it relates to building a highly-competitive deck for Road to Nationals. As always, you will better your odds through practice and experience. Tailor this list even more to your local meta and what you expect to encounter at the Road to Nationals. Good luck out there!

When you're ready, continue on to the matchup guide linked below.

Have any questions? Let me know in the comments! 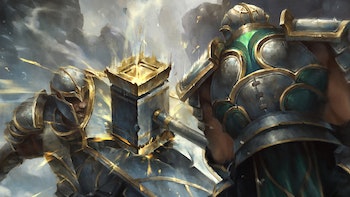 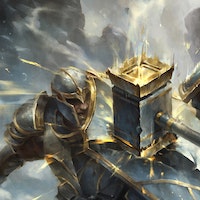 Another Round: Bravo Matchup Guide

Drew Cordell's article on refining Bravo for the Road to Nationals was met with a huge response, and its impact continues to grow- our very own Mark Chamberlain won a RtN piloting this deck! Now, Drew answers the call for a matchup guide in this addendum to the original article.

Drew Cordell has been casually competing at high levels of Magic: the Gathering for over a decade before discovering Flesh and Blood and playing obsessively. Drew is also an Amazon-Bestselling science fiction and LitRPG author and maintains a top 10 writer status in Games & Gaming on Medium.

A companion to Refining Oldhim Part 2, this matchup guide goes into strategic considerations and sideboarding for all heroes.

Drew's Oldhim build is tested and refined, with development focused on matchup-specific decisions. But when Oldhim shows Drew how he earned the title, "Grandfather of Eternity", can anything be done to beat the clock?

Drew invites you to walk alongside him as he develops, adapts, and refines Oldhim from new release to honed contender. This free introduction shares some early insights into the core of Oldhim, setting up the 4-part Pro series that begins today.