During the early days of Flesh and Blood, a lack of options allowed us to go pretty far without giving consideration to roles and aspects of the cards we were using, and chief among those has been weapons. While we've had options for our heroes since Crucible of War, the discussion surrounding weapon usage tends to stay at a surface level of, 'which is the best weapon for my hero?', without critically examining why.

Heroes use weapons in very different ways, and decks can be built around the varied options available to a hero. For the purposes of this article, I'm going to break weapon roles down into the following types:

By identifying the role a weapon is intended to play, you can quickly make sense of decklists online, while also making better choices in your own builds.

There is no better example of a core weapon than the Dawnblade. From the game's debut, the Warrior class- and Dorinthea in particular- has put its weapon front and center. The core strategy of a Dawnblade deck is to put forth the attack, and let the opponent begin to defend against it before you show just how strong it is- and what the consequences of a hit might be.

Winter's Wail can also be built as a core weapon. With a breakpoint 4 attack and the ability to deal Frostbite off a single blue Ice pitch, it has the power level of a 0-for-4 from a 1 card hand- and pitches, rather than discarding, the card you use to make that attack.

A core weapon is intended to be used frequently, and the cards in your deck are there to support it. Strategically, it's often the right choice to pitch a playable attack in favor of using the weapon; even if that attack is better, the weapon maintains cards in your deck. Core weapons can support long games, even fatigue strategies, due to the number of attacks you can make without reducing your deck.

When your turn hasn't gone according to plan, you can at least swing a weapon and keep some pressure on. That's the idea behind Ravenous Meataxe, a weapon you might choose to run to refuel your discard pile in Levia. Paid for with a single yellow pitch from a one-card hand, it can represent 5 damage if the draw & discard goes your way. But Ravenous Meataxe represents 'taking a turn off', and as it leaves you open to blood debts, it's not ideal by any means; its role is to maintain pressure while hopefully fixing your next turn.

Kraken's Aethervein plays a similar role. 1 arcane damage is easily prevented, but it does ask an opponent to give up a card from hand. But Kraken's steep cost relegates it to a fallback role, best used when you've already done something with your turn and still have a blue in hand.

Fallback weapons can represent real threat, but they're decidedly not the play you built your deck for. They lend themselves nicely to sideboarding, and tend to find themselves in decks that can utilize a full hand, where they act as insurance against turn cycles that required blocking.

Other examples of fallback weapons:

When a Brute equips Mandible Claws, you brace yourself for those Bloodrush Bellows. These cards perfectly harmonize with one another: BB discards a 6, giving the Claws go again, and BB pumps their damage up as well. 5 resources later, you've intimidated, pushed 10 damage, and might even have another attack left in hand! But outside of the Bloodrush turns, the Claws see little play, serving sometimes as fallback weapons and more often as if they weren't even equipped.

On the other end of the combo spectrum, we have the Teklo Plasma Pistol. Serving as a perfectly mundane way to spend an extra resource on a turn with leftover actions, the Teklo Plasma Pistol steadily improves as you draw into the pistol-enhancing Items, until it becomes the dominant strategy of the endgame.

Such is the role of a combo weapon: on hand and ready for that moment to shine. Combo weapons are brought to life by the right draw or the right configuration of cards. They use your weapon slot as space to store one piece of the combo- but in doing so, let your opponent know to expect it. Sometimes, the weapon facilitates the combo rather than benefits from it- such as a pair of Harmonized Kodachi extending the length of a combat chain.

Combo weapons show up in decks that have an otherwise steady gameplan, and are looking for power spikes to pivot the game or push for the finisher.

Other examples of combo weapons:

The bow makes the Ranger. Turn after turn, a weapon like Death Dealer is activated to facilitate attacks. The marriage of the weapon and the attack it enhances defines your gameplay: an arrow fired by Death Dealer, for example, effectively costs 1 more, but draws you a card to compensate. Which bow a Ranger chooses will be closely tied to how the bow's effects enhance the attacks and strategy of the deck.

Illusionists are similarly defined by their weapons- and none moreso than Dromai, whose Storm of Sandikai serves as the only way to get an attack out of her dragons. To forego this weapon would mean excluding dragons entirely from Dromai's deck- and essentially walking away from her identity.

Blurring the line between equipment and weapon, engine weapons literally make game mechanics function. Thus far, they have been tightly tied to classes- specifically, Ranger and Illusionist- rather than sporadically appearing as options in a hero's armory. Engine weapons leave heroes open to fatigue losses, as they rely on their interaction with other cards to do anything at all.

Other examples of engine weapons:

An expansion set's preview season is an ideal time to get acquainted with this topic. With a hoard of new weapons on display in Volcor's treasure room, it's easy to compare apples to oranges and mistake a new weapon as inferior to what you're already using- or get too excited about the potential of a new card to see how it asks very different things of your deck to enable! 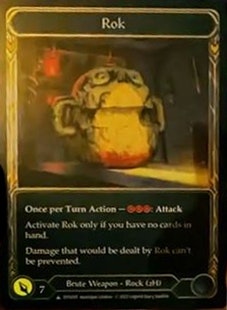 Take the recently previewed Rok, for example. A powerhouse weapon dealing 7 damage, Rok requires you to float enough resources to pay for it from an empty hand. Already the Brute community has pored over existing options to find the best ways to satisfy this peculiar requirement- but what kind of deck will we have once we've adapted to it?

Rok is best thought of as a combo weapon, requiring specific cards and interactions to fuel it. Brutes have no shortage of big attacks, so that 7 in and of itself isn't worth the work. Instead, Rok should be thought of as part of a power spike- and you should arrive at its empty hand via multiple attacks, rather than as a result of heavy defense. Rok competes with the Mandible Claws as a combo weapon, and should not be viewed as a new fallback weapon- and certainly not as a core weapon! If your deck currently uses Romping Club or Ravenous Meataxe, Rok is probably not going to easily slot in- but those who love to tear in with the Claws should feel right at home. 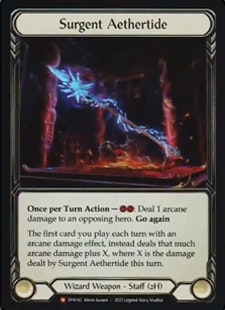 Surgent Aethertide gives Wizard a second core weapon, competing with Waning Moon for the role. And while Waning Moon does carry some of the signatures of a combo weapon- namely, it requires another action to be played to trigger it- the strategic use of Waning Moon intends to trigger it on most turn cycles, and the deck that runs it will make that easy to do. Surgent is similarly a primary strategy, a rare go again in Wizard's kit, and one that improves the rest of your turn either via boosted damage or lowered defenses.

What's interesting here is that Surgent Aethertide really opens new on-ramps for different styles of Wizard to develop. Crucible of Aetherweave has long been the default weapon of Kano, who wants to jack up the numbers on his arcane damage cards as high as possible; while on the other end, Kraken's Aethervein applied pressure to the opponent's hand in ways that served Iyslander's slow disruption plan valued. The fusion of the two is Surgent Aethertide- and both Kano and Iyslander could find themselves considering it as they move further from their respective poles to find common ground.

Once you begin to consider the strategies each weapon complements, you can appreciate the new offerings for what they are. Weapons can influence your deck in ways that rival hero cards; a new weapon with a different role can truly reinvent a class. Consider the role your weapon is playing in your deck, and whether it truly enhances your build, runs contrary to your goals, or is simply redundant.

Exploring an Expansion: Updating and Unraveling Your Decks

Expansion sets offer new cards for every class, presenting a deckbuilding challenge: how do you integrate and adapt the new hotness with your old standbys?

The Unifying Theory of Value

10 Mistakes We've All Made

We've all been there.