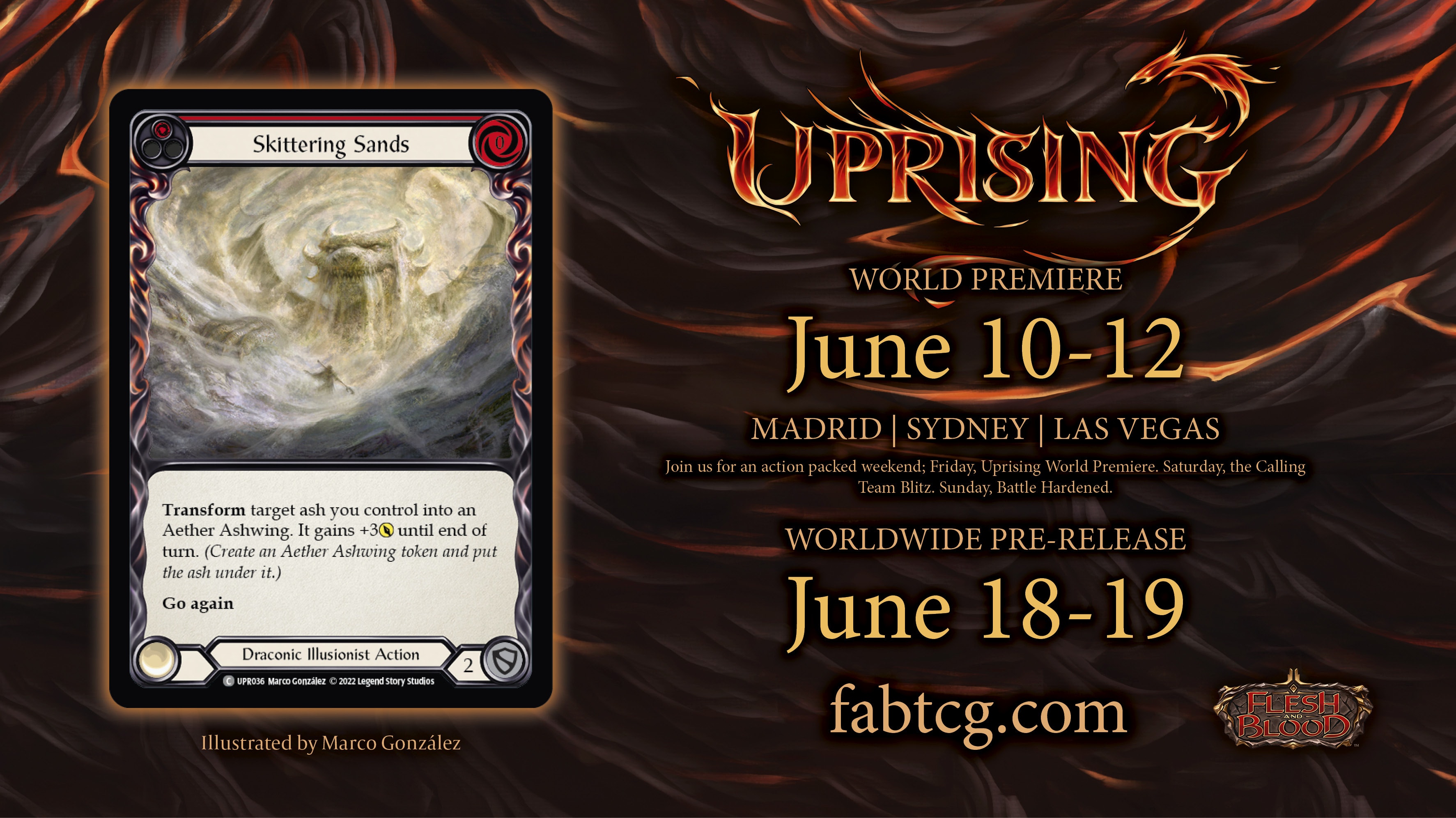 The Draconic talent seems to have a thing for ash, and in traditional Illusionist form, we're using ash to create something that appears to be much more than it is.

Dromai creates ash as she pitches red cards, and can also gain ash from her Draconic card pool. Ash is a 'Material', a new keyword that seems to point toward a token type that attaches to something to imbue it with attributes. In the case of ash, it says:

While Ash is under an object, that object has phantasm. 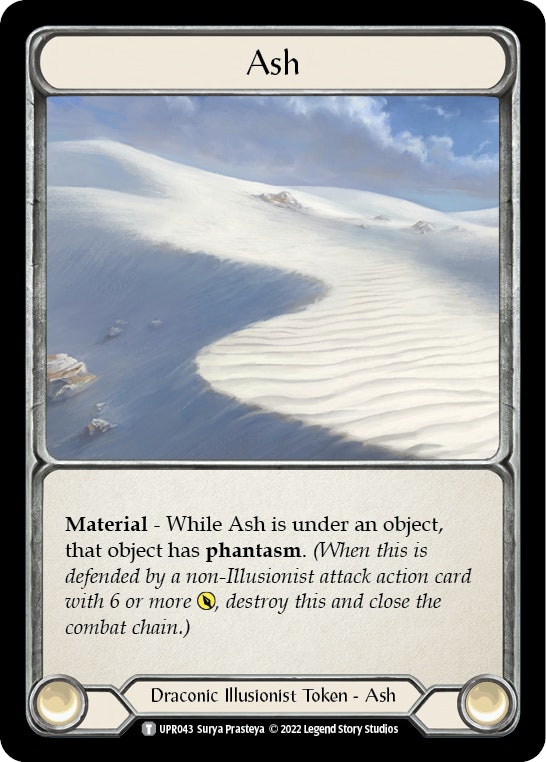 Skittering Sands provides the next detail, as it explains the Transform keyword.

Create an Aether Ashwing token and put ash under it.

So when Skittering Sand creates an Aether Ashwing, it comes with phantasm attached to it. (We can assume this will be the case with the major dragons too, unless the Transform keyword has radically different mechanics on different cards. If it's transformed from ash, it should have phantasm.) 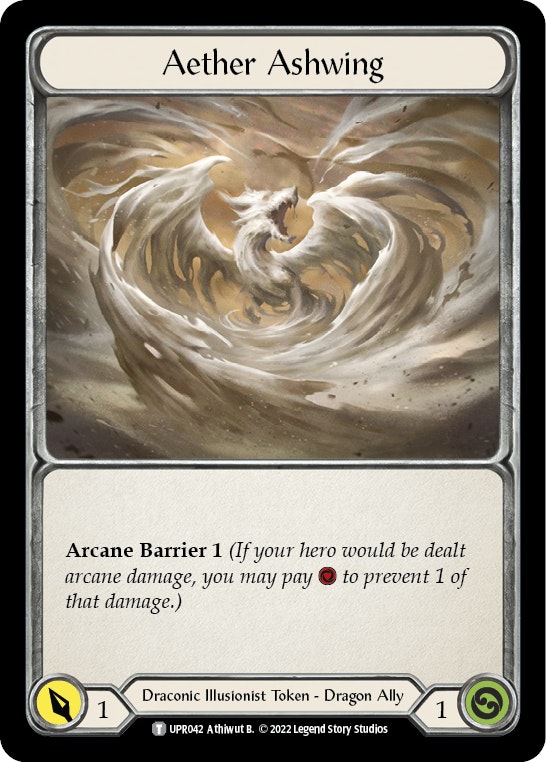 A 1 attack, 1 health token ally with Arcane Barrier 1. Yes, Dromai can craft Arcane Barrier mid-game without giving up equipment slots. It's a radical departure from how we've conceptualized arcane defenses prior to Uprising, and changes how Wizard players need to approach the matchup.

Skittering Sands (R) gives +3 attack to your Aether Ashwing, bringing it up to a 4 attack. Notably, it does not provide a way for that Ashwing to attack- further supporting the notion that Dromai is likely to command her allies with her weapon.

Skittering Sands (R) clearly supports using your allies to attack- and asks your opponent to make a hefty sacrifice if they want to trigger phantasm on the block! While a Light Illusionist throws attacks of equal or greater damage than the 6 required to destroy the attack, the Draconic Illusionist threatens you with pesky 1s turn after turn. It's only that first attack that deals significant damage- and a 4 is still less than the damage that blocking card could have done.

But this is a common, so we can assume a Skittering Sands (Y) and (B), presumably with +2 and +1 to the Ashwing's attack, respectively. At blue pitch, Skittering Sands is less about the possible attack and more about the Arcane Barrier, or simply increasing the density of your allies. For decks where your dragons are accessories and not the main weapon, the blue version should find a lot of use. 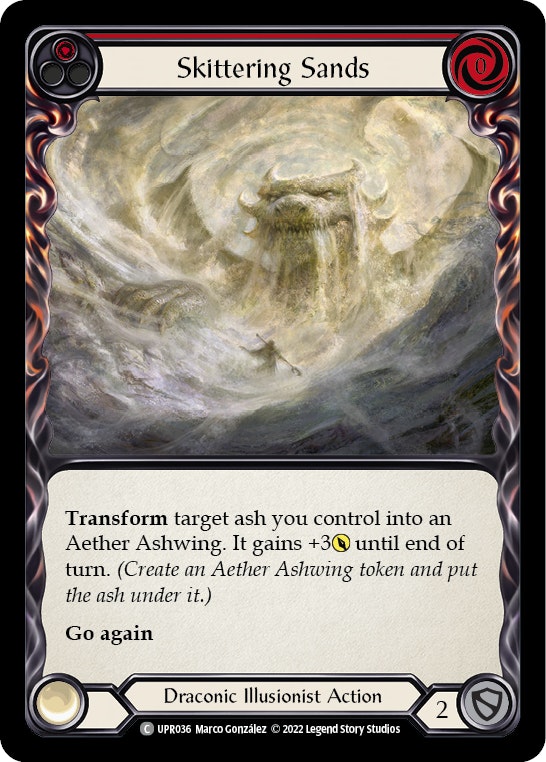 Marco Gonzalez has made an incredible piece of art for this card. The swirling sands feed a still-forming dragon, not so much rising from the desert as taking the desert up and giving it new reach. Dark and light are used to incredible effect to make us feel as though we're wrapped up within the vortex, within this illusion. We see a lone figure- staff held defensively, but without confidence- confronted by the dragon. If this is the scale of an Ashwing, perhaps 1/1 is not enough! Then again, perhaps it only seems that large in the moment. Perhaps you only feel it's power when it's freshly formed, before the sand begins to collapse in upon itself.

Holy shit dude. Dromai is going to be absolutely brutal to runeblades wizards and anyone who does arcane. that is crazy that they just get that reliably on the field like that. also i thought the weapons would turn the ashes into dragons. this is the same interaction. now the question is...what does the weapon do?

I love this so much. Illusionist has been a class favorite of mine, but with no Phantasmal Boots, I haven't been able to play the class much in person.

This set is going to be great!

I like the new classes - and as I'm a Prism main, my love fell for the Isylander - be it Evr meta blitz, or now Upr CC.
I'll give Dromai a trai (pun intended :P ) buy my heart this expansion is ice cold.
The new concept, of ultra-wide (4+ chain link) decks, is interesting and frightening at the same time - see what dread Briar generated with her immensely long turns on FoN/CMH turns!

I really like how Dromai still feels like an illusionist but also feels completely different from Prism. It's a really great design. Fai seems really cool, too. Hopefully the draconic/ninja card pool is strong so I can build a deck for him.... actually, I'll probably do it regardless. lol

@Karol I'm with you. Iyslander was a lot of fun pre-Uprising. And she's going to be even better with all of the new tools and cards she'll be getting with the set release.

Far from your noble 'Robin Hood', the Assassin has no intention of giving away the silver stolen by the blade.