Last time I wrote for the Rathe Times, I mentioned in passing one of my key pieces of advice for newer players:

This advice is true not just for new players, but for everyone. A loss is a humbling experience. You’re going to think about where you’ve made mistakes, what could have been done differently, how close you were to winning and it’s going to feel bad. In this article, I’m going to talk about losses at different levels of Flesh and Blood, from your kitchen table to large events, and how you can take away positive experiences from them.

My first introduction to the game was the Ira starter deck. You may be surprised to hear this, but I lost. There were so many complexities about tempo and card advantage that I had not grasped yet.

From there, the local scene moved to the Rathe starter decks. We were discovering how cards synergize and learning how to evaluate cards. Losses here were key, as we could figure out what worked and what didn't through the results- whether that be plays that didn't pan out (for example, using a red Sink Below on your opponent’s red Snatch for a clean block, only for them to play a Razor Reflex) or through the literal game ending.

At this stage, you’re going to pick up ideas for your deck building with every loss. Perhaps you discover which color a card is most effective at, or how your ratios for colors in your deck work best for you. This opening stage of your journey is a beautiful time of exploration and trying out different things with your friends, where each of you will be discovering everything through trial and error. There are few, if any, stakes on the line here, so by all means, lose. Lose a lot.

So now you are at your local Armory. You have your deck that you’ve been preparing for the last few weeks and you are ready to test it out against the local scene. Some players have been playing for over a year, some a few months, and some- like you- will be just starting out. You finish the day with no wins, 3 losses and 1 draw. Your deck did not perform the way you expected. You were unfamiliar with some of the cards and your Katsu opponent attacked you 8 times in one turn. 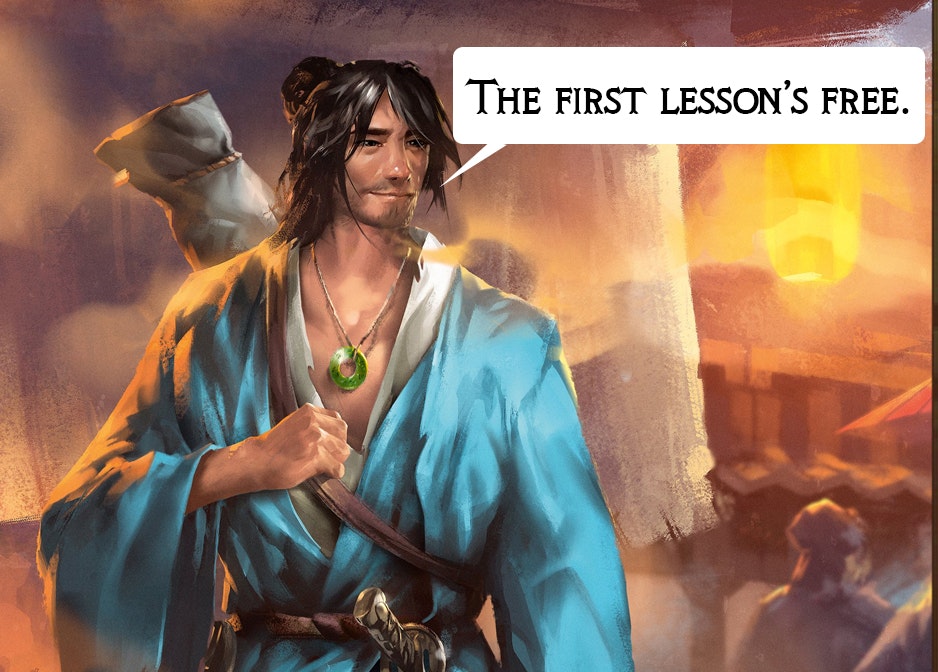 These losses are crucial in deciding how you’re going to proceed in this game. These are your opportunities to learn from those who have put in the work before you and reevaluate what you think you know. It’s also a fantastic opportunity to ask questions- find out more from your opponents and others about what happened in those games and how your decisions may have led to your losses. As you go to more of these events and pick up more tips, you’ll find that you get fewer losses. The key here is to not get too demotivated during these games. Take the losses as they come and look for the opportunities to learn.

At the competitive level, your opponents will be tough, and losses even tougher. During the swiss portion of the event, each loss brings you further away from the top cut, with early losses bringing the most pressure. And of course, a loss in the top cut ends the tournament for you. Both of these kinds of losses provide different mental obstacles you'll need to clear.

A loss in the swiss will make your road to the top more difficult. Ideally you want to have a perfect record coming into the top cut, but losses will get in the way of that and will cause you additional stress. There are still things you can take away from these losses however, especially if you have eyes for the top prize.

Take inventory of the mistakes you have made in the game. Make note of what your opponents may have been doing, as you may see them again in the top cut.

Finally, try not to let it get to you. A loss does not always mean the end of the road for you. Even if it means you’re out of the top cut, you can still work towards playing clean and taking what experience you’ve learned from the day to bring to the next event. There will always be more events. Your loss in the top cut will end your tournament, but it won’t the end of your FAB journey.

Your loss in the top cut will end your tournament, but it won’t the end of your FAB journey.

A loss here really hurts- and I know it personally. I still think about it to this day, and have the second place prize looking directly at me as the first thing I see when I wake up and the last thing I see when I go to sleep. Your mindset has to change here. Instead of focusing on the loss, think about how much you overcame to have the opportunity to lose that final match. You did what almost everyone else in that room didn’t do, and you are good enough to reach that point. Why not do it again?

Like any other loss, there will be things that maybe you could have done different, but you don't need to beat yourself up over it. You’ll need to think of strategies to fight the tournament fatigue and adjust to the meta. But also, you need to be proud of what you’ve accomplished. Know that you belong.

So You Lost a Game of FAB. Where Do You Go From Here?

Again, losing feels bad. It’s all well and good to talk about maintaining a positive attitude through the losses, but accomplishing that is a whole different task. To make losses a healthy experience, here are the processes I go through in an event.

Firstly, I allow myself to grieve the loss. I hate losing. I never want to lose and it’s an emotional experience. Don’t deny yourself those emotions; instead, use it as motivation. Take a moment, take in that feeling, and then move on to figuring out what went wrong.

Where did you misplay? Where did you take the wrong gamble? Was there honestly something that was just out of your control? A lot happens in a game of Flesh and Blood. One of my good friends once told me; “A game of Flesh and Blood will more often than not be won by the player that makes the fewest mistakes.” Think back honestly on where things went wrong and where you could have made a different play; then commit that to memory.

Occasionally, there will be things that went wrong and were entirely out of your control. Perhaps your Chane opponent had back to back Art of War turns. Or your Dash opponent had a turn zero item. Evaluate honestly. If you are in a good headspace, feel free to talk about it with your opponent. Learn as much as you can. If you are not there yet, that’s fine. Be gracious in your loss.

Then put the loss behind you. You’ve taken what you can from the game, but the day’s not done. You can always strive to do your best in these events. Dwelling on your mistakes can cause you to misplay in the future. Focus on the next task.

To cap this off, I want to talk about testing and losing. Like I mentioned at the start, test games are your lowest stakes games. This is where you stand to take the most from your losses at the least cost. Do not be afraid to lose here! Try out lines that you are not sure about and talk about them as you’re going through them. It’s through losing in these games where you find out what does not work- and hopefully stumble into what does. Put in the effort here, and you can reduce your losses in the meaningful games.

A loss is never the end of your journey but rather, another moment. I want you to remember that, win, lose, or draw (let’s be honest, that's a double loss in FAB), this is a game that we play because we enjoy it. Never lose that joy. Do what you love in this game, whether that be competing at the highest level or playing at home with friends. When a loss comes, so be it.

There’s always going to be another day, and another game to play.

Skirmish season offers a significant format transition from the standards of the last several months. Drew Cordell helps you get your feet beneath you. This article covers the specifics of the Tales of Aria Skirmish season.

Skirmish season offers a significant format transition from the standards of the last several months. Drew Cordell helps you get your feet beneath you. This article covers general advice for Skirmish now and going forward; this is followed by a Pro article covering the specifics of Tales of Aria.

How I Meta-Gamed Vegas (and What I'm Doing for Nationals)

Tyler Horspool was halfway to winning the Calling before he even showed up in Las Vegas. Here's how he set himself up for success.