It’s Tuesday in Spoilerville, and we here at the Rathe Times want to make sure that you feel properly equipped for the Ever-festivities ahead. In fact, I’m here to specifically give you a hand. 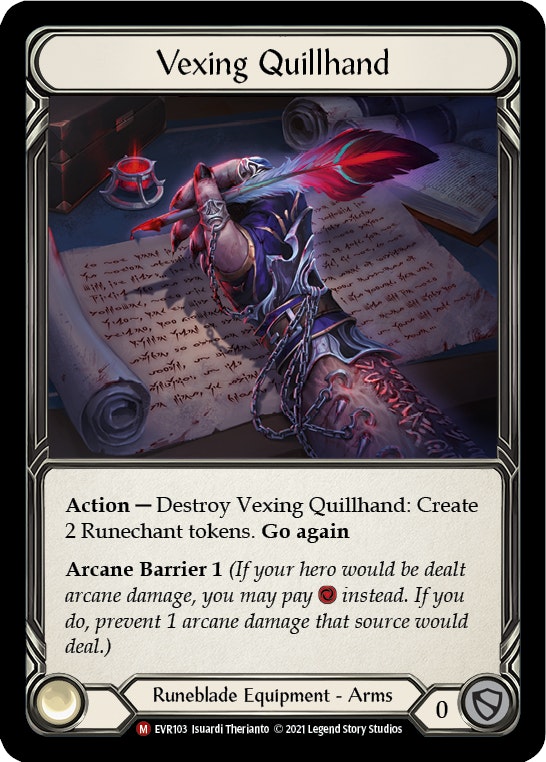 Vexing Quillhand is a new piece of Runeblade Armor; it’s coming in at the Majestic rarity slot, and what’s more is that it is going to directly complete with our lovely Grasp of the Arknight. That’s right, this piece is going to fit like a glove in aggressive decks, and it slots neatly over Nullrune Gloves, if you ever found yourself in an arcane-damage-heavy meta.

Not only do these mittens come with a 10-pint well of ink, they boast Arcane Barrier 1 and a brand new twist on an old effect. Rather than preventing arcane damage (as Spellvoid would), this accessory can be destroyed to create two Runechant tokens on the fly. Rather than allowing for a drip of resource, it can be cashed in for a burst instead.

I speculate that this is a touch of an answer to Arcane Rising going out of print, too. Not only does it swoop in with the reprinted Arcane Barrier, it also comes with a powerful effect for the hand slot just in case Grasp of the Arknight goes too long without a reprint and spikes up in price.

If Crucible of War, Monarch, and Tales of Aria are anything to go off of, we can pretty safely presume that the Equipment is going to be short-printed, similar to other Majestics. Nevertheless, your average Majestic Equipment is going for anywhere from $10 to $40. I’ll leave the numbers to the professionals, but my gut instinct is that we will see similar prices, or potentially lower, with this new set. The print run is not yet announced, but I reckon that this set will see an overall increase in the digits as compared to the previous sets. If this is the case, then these gloves will be a viable, cost-efficient alternative to seeking an out-of-print Legendary.

One thing that I have been excited for in the run-up to Everfest is the prospect of new equipment that pulls decks in new directions. I don’t think anybody really wants to see a better version of Grasp of the Arknight: we want to have new decks in the meta! New pushes and pulls on the flow of the game, the tide constantly adjusting under new moons in the sky when each set hits the eternal metagame with a cold foil flourish.

This armor does not provide any density, unlike the Grasp which could block for 2, then 1, and still stick around for effects; instead, what I’m reading off of this card is a strategy that wants to go fast- faster, even, than getting that extra block from Grasp would allow for.

Further, I don’t think that it really goes in to a Viserai One-Turn-Kill deck, where we traditionally see those Runechant-making cards; sometimes that deck’s biggest shortcoming is drawing into hands that it can’t use, and having a pitch outlet in the form of Grasp can be a big boon that the deck does not want to miss out on. I don’t have any brews just yet, but you can bet that those are right around the corner here on the Rathe Times.

Now, I’m a big lore guy. What the heck is that hand writing! Well, before you go nuts trying to translate it, we’ve got you covered right here. 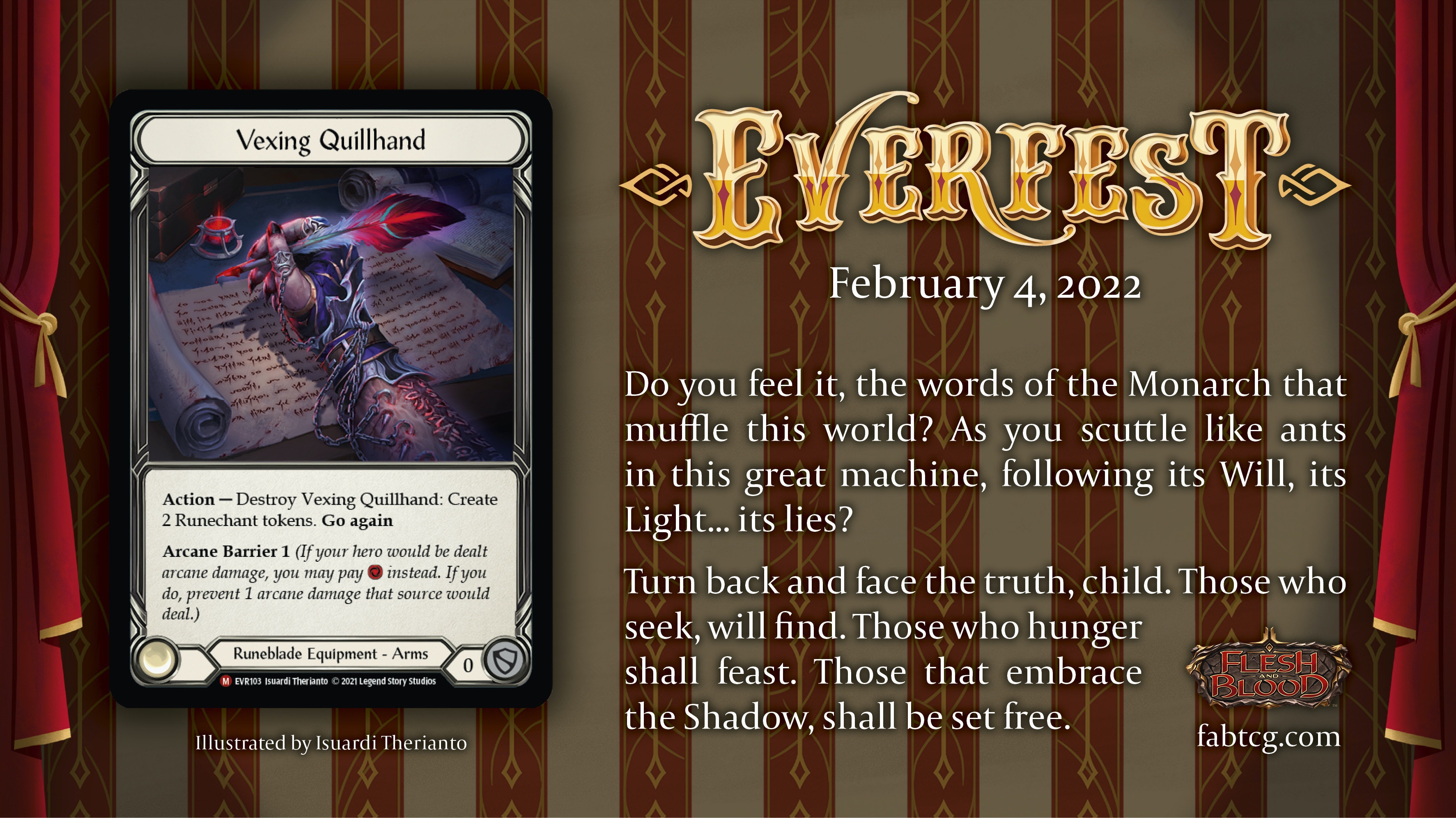 So, this is a clear reference to the conflict of Light and Shadow that we saw in the Monarch set, and an elucidation on what that Monarch might be. Monarch means king, and a lot of things flow to mind when I think about kings– namely, the divine right of kings. I think about the bounty of Sol, and it’s vast kingdoms of Light. Perhaps the Monarch itself is the god of Sol: “The words of the Monarch that muffle this World.” If you’ve read (or heard!) Chane’s story, you’ll know that he comes from a line of scholars who studied at the Great Library until they were cast out for paying attention too closely to what they were studying; scholars who asked too many questions, the kinds of questions that left others picking at the seams and pulling on threads. Who is to say who is right in this conflict? They both seem convinced that the other is in the wrong.

I’ve seen illuminated manuscripts, but this takes the inversion to a whole new level. Gold leaf pages and lettering? How about YOU are the ink tank! It seems dark, but those who walk the shadow side of this conflict know things that only the pain of a Blood Debt can reveal. I can’t wait to see what forces are about to bear down and shape the game, as well as the narrative. Who wins in the conflict of Light vs Shadow? Probably not Rathe.

Good stuff! Love the narration as always, Mark! Runeblades are always creative in how they save money on ink.

Far from your noble 'Robin Hood', the Assassin has no intention of giving away the silver stolen by the blade.