Welcome to my new series where I look back at 20+ years of playing games competitively and share with you what I’ve learned, from the grand successes to the embarrassing failures. From game theory to self-improvement, this series will focus on how you can improve as a player and learn from your mistakes.

My name is Michael Clair, and years ago I wrote a column for Star City Games on how to become a better Magic: the Gathering competitor, talking about my first-hand experiences trying to make it to the Pro Tour.

Recently I’ve become an avid Flesh and Blood tournament player (currently ranked 23rd in XP in the US), and now as then, my goal is to prepare players for the top tables of a competitive tournament, where stakes are high and the pressure is on. Anyone can win round 1 on a Saturday morning. It takes skill, commitment and mental fortitude to win that final win-and-in, and I hope this series helps you do that.

This is not an article I thought I would ever write, not with the well-earned moniker “The Magic Jerk” bestowed upon me by one of the most famous people in MTG’s illustrious history.

I’ve learned a lot since those days, where I would have (and did) do anything within the rules to win. In this article, I hope to lay out why being the best player you can be necessarily excludes being a “jerk” like I was.

“Angle shooting is engaging in actions that may technically be within the scope of the rules of the game, but that are considered unethical or unfair to exploit or take advantage of another player.”

Why would a player angle shoot? Simply put, it increases your win percentage, especially in the early rounds of a tournament or against weaker opponents.

So, why not angle shoot?

Strengthen yourself first, and you will not only not need to angle shoot, you will be immune to angle shooting from others, creating strength from weakness.

Persons of high self-esteem are not driven to make themselves superior to others; they do not seek to prove their value by measuring themselves against a comparative standard. Their joy is being who they are, not in being better than someone else. - Nathaniel Branden

(In future articles, I plan to focus 100% on FaB, but for now I believe these examples are applicable to any TCG competitor.) 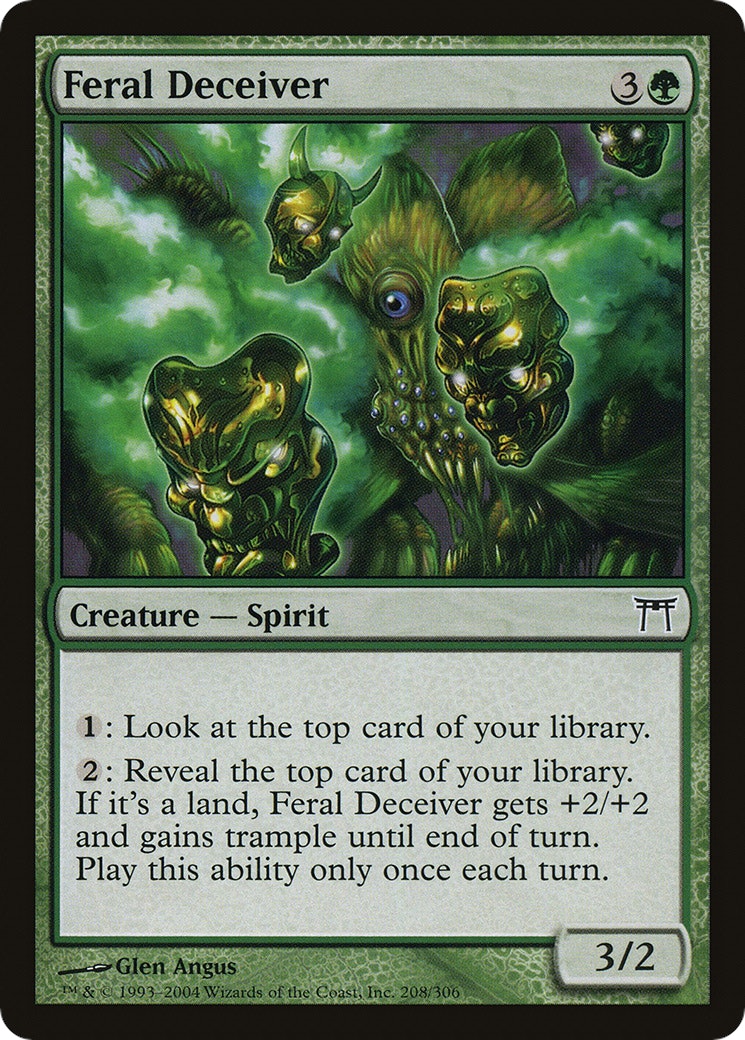 Once upon a time, a long time ago, I was in Chicago deep in a Magic tournament playing for my first Pro Tour invite. I was playing Champions of Kamigawa block and attacked my opponent with Feral Deceiver (pictured).

After he chose not to block, I looked at the top card of my library (using the creature’s first ability), thought about it, and declined to reveal via the second ability, instead asking my opponent “Take 3?” He went to kill it with an Instant, to which I flipped my top card in response, revealing the land that I had seen earlier, effectively countering the removal spell and causing the opponent to take 5. My teammate was watching next to me and clapped me on the shoulder. It was probably the best real time Magic play I’ve ever made.

So was it angle shooting?

It was not unethical. Though I did deceive my opponent I never lied, he just made an assumption based on my behavior.

It was not unfair. What I did was wholly within the rules, and again, I never lied, I just omitted information that was not required to maintain an accurate game state.

Finally, it was not exploiting or taking advantage of the rules in a way that was not in the spirit of the game. At the end of the day, tournament Magic is a competition, and just like on the basketball court, you play to win.

In an early round of a Regionals tournament, I was down a game against an opponent with a deck that was about twice the size of an average deck, with sleeves so sticky it was difficult to shuffle. My opponent was years younger than I, and obviously nervous. Rather than be an ambassador of the game, I called a judge on my opponent ostensibly because I had concerns about the state of his deck. He was deck checked and given a game loss (deck registration error). I won game 3.

I don’t know if there is a better example of successful angle shooting in competitive card games. I went on to top 8 that tournament and qualified for Nationals- where I proceeded to get utterly decimated and frankly embarrassed. As I said above, if you rely on preying on opponents’ weaknesses to find strength, you will eventually be unable to effectively compete.

The truly ironic part about this is that I, along with many others, play games to improve. We are driven to get better, to progress in goals, and find in ourselves a satisfaction as we track the growth of our prowess. A successful angle shot may seem to catapult that progress forward, but in reality it is hollowing out your game. Rather than a strong foundation, you have an inherent weakness and an external reliance. When faced with equals, or betters, this weakness will be exposed, and you will fail.

States (and the importance of a strong mental game) 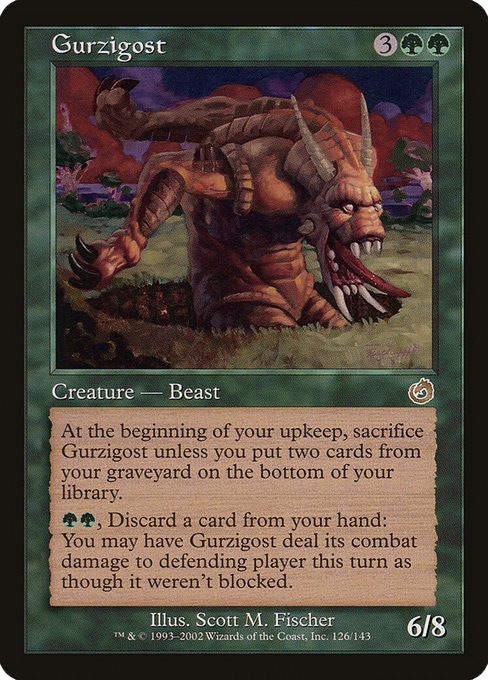 Playing in the final few rounds of a long tournament, I was playing a RG deck against a rather obnoxious opponent. I played Gurzigost and passed the turn. My opponent hemmed, and hawed, and broke the usual cadence of his turn in a few different ways, all in an attempt to throw me off my game. So when I finally untapped and drew, and my opponent picked up my Gurzigost and physically threw it into my graveyard with a triumphant exaltation, I wasn’t just embarrassed, I was pissed. I had been gotten.

So did my opponent angle shoot?

You better believe it. Did it work? Yup. But ironically, I ended up playing better because I was pissed, either at him or myself, I couldn’t tell you which, and I went on to win that tournament. I was always stubborn and to this day play better with my back against the wall than from the lead.

The Digital Age of Sportsmanship

In this age of digital card games, a lot of the angle shooting of real world tournaments is gone. Aside from the occasional roper, or emote spammer, most games are not decided by seeing fear in your opponent’s eyes across the table, or that subtle hand tremor when they played that last card. I’d say overall card games, like most games, suffer from the lack of real world interaction- but in many ways as a training ground, the digital arena is a better place than a local JSS tournament.

I want to end this article with a story of how I got 9th in a 20 person tournament a few weeks back that cut to Top 8. I was 2-2 going into the last round when I sat down (virtually) against my last opponent. He was all but defeated. It was late at night, and he wanted to go to bed. During some of his turns, he forgot that he could Go Again with his Dawnblade after he (barely) hit with an active Warrior’s Valor; he forgot that his Dawnblade had +2 from a Steelblade Supremacy on the 2nd attack; and he forgot to draw on hit. The list went on. Each time these things happened, I chose to remind him of the missed trigger. At one point he remarked that I was playing his deck better than he was. We laughed.

It was a great game, and when I lost to a Steelblade Shunt while at 1 and we reported (my opponent took the win and dropped from the tournament), I went from 10th to 9th and missed Top 8 on breakers. Ironically 8th place was AFK and the number 1 seed had a bye in the first round of the top 8. I watched on Twitch.

Any tournament player can tell you, 9th place sucks. And it does suck. But when that opponent left that game laughing cheerfully, and DM’d me that he would love to play again some time in the future, I felt good in the face of defeat. I felt really good actually, and I went to sleep a little while later with a clear conscience and a smile on my face. I could’ve won that tournament, and I didn’t care for a second. When faced with the decision to take advantage of a downtrodden opponent and limp into Top 8, or cheer up my opponent and have a good, clean, memorable game the choice was eminently clear.

When faced with the decision to take advantage of a downtrodden opponent and limp into Top 8, or cheer up my opponent and have a good, clean, memorable game the choice was eminently clear.

Respect is earned, especially from yourself. Most game community cultures are a meritocracy, and you aren’t much better than your last tournament result. But I will tell you this, the most important thing I’ve learned in 20+ years of competitive gaming:

You have a better chance of winning at the highest levels just by being a good person.

More people will want to play/practice with you, and you can sit down across from anyone and play your game to the best of your ability because you are complete in yourself. You will have an edge, you will be stronger, and you will win more because you have earned confidence.

Hope to see you at the top tables.

It is not the mountain we conquer but ourselves. - Edmund Hillary

I've missed more than 9000 shots in my career. I've lost almost 300 games. 26 times I've been trusted to take the game winning shot and missed. I've failed over and over and over again in my life. And that is why I succeed. - Michael Jordan

If you can’t accept losing, you can’t win. - Vince Lombardi

The Importance of Sequencing in Flesh and Blood

Sequencing your actions correctly can often provide a substantial advantage in Flesh and Blood. This article goes into more detail on careful sequencing and three ways it can improve your game.

Climbing the Mountain: How to Prepare for a Major Event

On June 5th, players from across Oceania came together for the Calling. For myself and many others, the journey up that mountain started from the moment the first spoiler was revealed. Today, I invite you to join me on a journey that ultimately lead to a second place finish at the Aotea Center.

Converting Your Magic Credits to a FAB Major

Many of the skills and concepts you’ve learned from Magic will carry over to Flesh and Blood.