Stop me if you've heard this one... 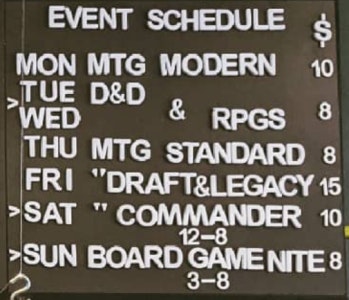 "I can’t grow Flesh and Blood because my local community is all Magic players and my local game store just isn’t interested in a new game."

It can be frustrating to know you have a good thing that nobody cares about. Getting a gaming community interested in something new, especially something that requires an investment, takes a bit of finesse.

In Colorado, we quadrupled our player base and went from 2 stores holding events to 9 in three months. But we didn’t just show up and say, “You should carry Flesh and Blood.” There was work, planning, and follow-up involved. We leveraged the player base we already had, but that only went so far.

With this short series, I want to share what has worked for me and some things I’ve learned along the way, starting with generating awareness, then partnering with LGS owners, and finally building on momentum. I hope that it motivates, inspires, and gives you tools to help grow this fantastic community and the fantastic game that is Flesh and Blood.

The Importance of Generating Awareness 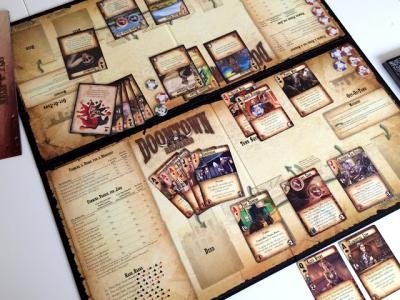 A game may seem like an absolute homerun, but it doesn’t mean anything if it doesn’t sell. The risk of product collecting dust is greater for an LGS if the local scene isn’t talking about that product. Ask any shop owner about a game they’ve been stuck with and I guarantee you they’ll have something in the back somewhere that was “supposed to be the next big thing” but didn’t move.

As a champion of the game, generating awareness, sparking conversation, and creating curiosity are the best ways that you can reduce risk and convince a store owner to consider supporting a product. The biggest benefit here is that you are demonstrating local interest without forcing a financial and physical commitment onto that store. As long as you’re respectful about it, this is a no-brainer partnership, and a good owner will recognize that.

The following tips are things that I have found to be incredibly effective in getting that local buzz started without putting too much pressure on anybody.

It’s hard to get interested in something you can’t see. Walking up to someone and talking to them about Flesh and Blood might get a verbal agreement to “take a look at it,” but you can make a much bigger impact by showing up with the game. Even if it’s just you and a friend, go to a store and play. Leverage the local community you already have, no matter how small it is.

Usually, an LGS isn’t going to mind if you use a table, as long as you are respectful to events and the people around you. Some stores may be more reserved about open play, and that’s ok. Try to negotiate a table if you can, especially during non-busy hours and off-days during the week. Friday Night Magic and weekend events are probably not the best times to jump in, but make an effort to be kind and build a rapport with the owner without being demanding. You may find that needle starting to move in your direction.

Flesh and Blood has made enough of a presence that many at least recognize the name. Seeing it in action, even out of the corner of their eye, could spark curiosity to pop over for a bit and hover- that’s when you can start talking about it! However, be respectful. Feed off of the natural curiosity of others. Do not come in like a Used Car Salesman and say they need to see this. I love the game, and even I wouldn’t want to listen to that! 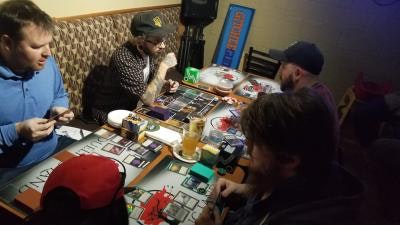 A less orthodox tactic is to go to a brewery, bar, or restaurant and start playing. You’d be amazed how many times we had people who dabbled in Magic or some other game ask questions. “Hey, if you want, we’re trying to do some events around town, you should pop into our Facebook group if you’re even a little interested.” Good way to cap off that conversation.

Also, take pictures! Show that people are playing, even if it’s just a few of you! Even amongst the community you have, “look who showed up” is much more exciting than “we hope to see you”.

2: Master the Pitch, Respect the Audience 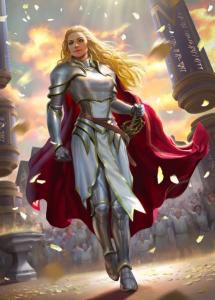 In any gaming community, there’s a fine line between celebration and competition. I get it, the temptation is great to look at the state of Magic: The Gathering (MTG) right now and want to swoop in with your shining armor, sing the praises of LSS, and ridicule the evils of WOTC. Don’t. Flesh and Blood isn’t a “Magic Killer” and it doesn’t want to be.

“Bringing people together in the flesh and blood” is a celebration of a hobby, not a demand for a pedestal. As you introduce Flesh and Blood to others, avoid saying “why it’s better than x game.” The mentality becomes “let’s see how much better it really is” instead of “why might I enjoy this,” which defeats the purpose.

Some of my personal reasons I love the game, that can resonate with any card gamer, include:

If you have your own reasons, go for it! Try not to be too intimidating and jump into game specifics though. Too often I hear people talk to a curious player about favorite combos, favorite turns, favorite heroes, and I want to just hit the mute button. Remember your audience! Details like “I love giving my attacks dominate and making it so the opponent can’t defend” requires knowledge of the rules and the points that WILL resonate gets lost in a sea of tangents. If you’re a marketing nerd like me, you’ll have an elevator pitch for this kind of thing. 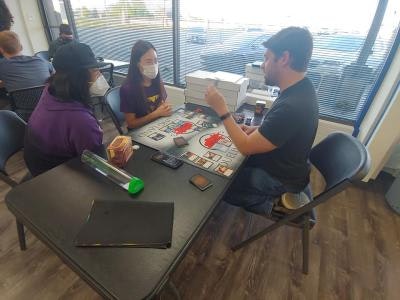 “So, tell me about Flesh and Blood.”

“Sure! Flesh and Blood is an up-and-coming card game that puts a lot of emphasis on interactions and feeling like you’re part of a fight. You come in at your strongest. You leave beaten and bruised. I like that it’s fast-paced, there’s tons to do even on your opponent’s turn, and it really rewards skill over ‘the most expensive cards.’ Blowouts don’t really happen. It’s super unique in how it plays, it is wildly fun, and there’s something for basically every playstyle. If you have a few minutes, I’m more than happy to show you.”

It’s ok to start fairly high-level. If they’re interested, you’ll get insight into what they enjoy about card games in general and then feed off of that. Flesh and Blood is unique in that it really caters to darn near everything that makes these games fun.

“Flesh and Blood is too expensive.”
“This game is only going to last a few years.”
“I don’t really see people playing it.”
“I’m not up for a new card game.”

If there’s anything that turns someone off to…literally anything, it’s expressing a concern and getting a “nuh uh” in response. Be better. These are the common concerns that I hear, and honestly, you need to be ok talking about it. Be ok OWNING it in some cases. I didn’t get into Flesh and Blood until January 2021 because I had the same concerns. Remember, it wasn’t until recently that FAB got really popular. 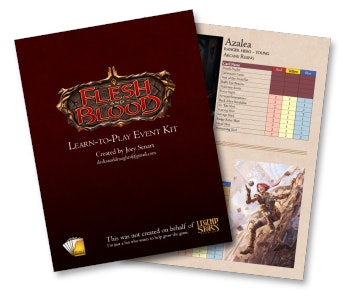 I’ll talk about my tips on teaching someone the game in another article, but be prepared to show off Flesh and Blood if someone wants to learn. I try to keep some starter decks handy that I can use to educate or even hand out to players who may actually put some time into it. If you want some really easy decklists to get started with, I created a Learn to Play Event Kit that has plenty, along with hero guides you can print out and share with others. They are made from bulk commons, and you can usually get one deck for each hero out of a single box.

If they want to try for free, FaBled Hunters also provides free decks, which they can get by doing the following:

Send an email to fabledhunters@gmail.com with the following:

If you see enough people asking, it’s a great opportunity to talk to the LGS owner and say “I’d love to run a learn to play event, as there seems to be a lot of interest.” They’ll probably notice that too.

Generating awareness is one of the best first steps to building a community and sometimes that just means giving Flesh and Blood a presence. Being on a shelf won’t make people as curious about the game as seeing it in action. Feed off that curiosity to talk about FAB, find out what players like in a card game, and show how Flesh and Blood satisfies in that respect.

Avoid putting FAB on a pedestal above other games. It just starts the conversation off wrong. Think about reasons you like the game that someone who doesn’t know the game can connect to. “I really like that Viserai is a versatile hero” is only praise if you know what any of that means. Chances are your audience wont.

Like any new game, there are concerns and hesitations with wanting to get started. Don’t discount that from other people just because you moved on from those concerns. Worries about cost, player base, and longevity are very valid; many of us probably had them before we started. I know I did. Respond respectfully and always offer to show the game, and if you can offer something to take home to try it out, do so.

Lastly, be prepared to show off the game. Whether that’s walking someone through turns you’re currently going through or sitting down, handing them a deck, and doing a demo. As someone who is curious, I’m a lot more willing to be shown a game if I don’t have to commit anything except time. LSS recognized this also in offering up Ira decks, even knowing they have Blitz decks available for purchase. 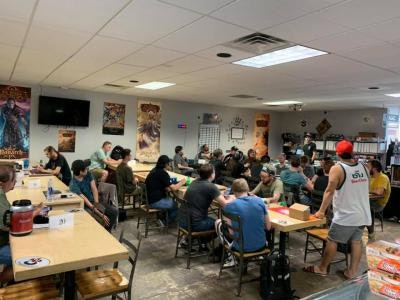 All of this gets people talking. Two people playing can easily turn into 4. That’s an entire table enjoying this new game and that will attract attention. With that attention, that could generate interest by the LGS to perhaps run a small event to see who really shows up and that point, you have a partnership.

I’ll talk about leveraging that partnership in my next article in this series: Partnering with your LGS. What do game store owners think about when taking on a new game? What are the concerns, what are the flags, and how do you speak their language?

Good luck, have fun, and please don’t hesitate to reach out if you want to chat about it!

Bringing together a marketing, training, and project management background, Joey has devoted his Flesh and Blood tenure to growing communities around the world through creating materials designed to set stores and players up for success in their community building. Starting with Star Wars CCG in the 90's, the thrill for him comes from finding jank and enjoying the company of other players, usually over beer. Housed in Northern Colorado, you can spot him playing games at a local brewery or on his YouTube channel, Decks and Draughts, talking all manner of card games, marketing, and sweet, sweet libations.

It's Pro Tour Weekend and I'm Stuck at Home!

Couldn't make it to Jersey this weekend? Here's how to make the most of it.

Finding Your Voice: Entering the World of Podcasts and Video Content

Dipping your toe into the vast sea of content creation can be intimidating. Matt walks you through what to expect, and how to best approach the humble beginnings.

Making Your Tournament an "Event"

Not every tournament needs to be an event. But when you want to drive attendance and leave people talking, these tips may be just what you need.