One of my favorite things about my role as the Editor at Rathe Times is the ongoing relationship we have with many of our authors. I've seen Drew's development from a disciple of the School of Bravo to an influential shaper of the Guardian meta. I've talked with him as his ideas have taken shape, seen refinement across his work, and now am excited to share a similar level of insight with all of you.

As Drew develops his Oldhim deck, I expect to see the community mirror many of his choices. But just as much, I expect the community will shape Drew's development. That's the thing about TCGs: we're all equal part teacher and student, and nothing is ever done developing.

If you've ever read an article and wondered, "How'd this guy become an expert?" The truth is, we all stare at the blank page on the computer and ask ourselves the same thing. And then we start to write, putting into words what we know in our heads, what we've experienced in gameplay, and what we've learned through failure. By the time we've reached the end, we've become the expert- at least, for that moment, on that subject- and then we start all over again.

I hope you'll check out Drew's article series, which we'll be adding to in 4 parts over the course of the next few months. You'll find a link to Part 1 at the end of this Introduction and brief Primer.

Initial testing leads me to believe Oldhim will have the power to disrupt the Blitz meta- finally positioning Guardian to have a favorable matchup against Ira, the former scourge of all the format. Whether Oldhim will carry that same weight in Classic Constructed remains to be seen and tested. His shell is more defensive than Bravo’s, yet he has less resource dependency than his hammer-wielding counterpart. Regardless, I am extremely excited to be on the forefront of trying to solve this new hero and test the limits of what Oldhim can do competitively.

The algebra and calculus of the math behind Oldhim gets a little more difficult when we consider the fuse mechanic and its requirements to empower Oldhim’s attacks. Notably, most Earth and Ice cards only block for two, so it would make sense to strive to minimize them as much as possible while making sure we can consistently fuse attacks and infuse Winter’s Wail to threaten that frostbite token each time we swing in with the ‘Minithos’.

It’s a linear programming scenario, and once I can map out all the variables, it’s one I am confident I can definitively solve with the hypergeometric calculator and the Simplex LP Solver. Granted, it can be hard to quantify the value of on-hit effects and disruption to our opponent, so some assumptions need to be made.

Some Areas of Concern- and Excitement

The largest area of concern will be consistency and finding the correct ‘solution’ to the best 80-cards to sleeve up for Oldhim. The deck will be limited in how many sideboard cards it can field for any given matchup without disrupting the mathematical ratios that govern the power of the deck through fuse and efficient use of Winter’s Wail.

With my initial build, I am testing 9 equipment and a 71-card main deck. That deck consists of 19 red pitch cards, 10 yellows, and 42 blues. Before sideboarding and potentially adding or subtracting specific element cards, there’s a 31.6% chance of drawing an element card as the first card of the deck. In any given hand of four cards, there is a 79.2% of having at least one element card that can be used for fuse, or Oldhim’s hero ability. In a vacuum, 8/10 hands will empower a fuse of some kind.

The challenge will be to balance the ratio of Earth and Ice cards to the attacks in the deck, always remaining conscious of that ratio while sideboarding for any given matchup.

Another concern I have? Bravo just got a lot better with Tear Asunder. This may be one of the best Guardian cards ever printed. Like it or not, Oldhim will be competing with his generic counterpart to be the best Guardian in Aria. Bravo’s consistency gives him an automatic leg up against Oldhim- at least in the short term.

I'm already looking forward to how fuse will improve the longer the game goes. Because fused cards are not spent or consumed, that typically means they will be pitched for resources the next turn after a big fuse attack. Over time, the element ratio of your deck will increase and Winter’s Wail will grow to be more powerful and efficient.

Rouse the Ancients (RtA)- a card I put too much stock in with the last set- gets more support with Glacial Footsteps (Blue). Oldhim will be able to more reliably play RtA by pairing an 8-attack with a five-attack card. Having the ability to play RtA with two blue cards is huge. But including RtA comes with an opportunity cost. Notably, it incentivizes us to include Cranial Crush- a great Guardian card, but it does not combo with or enable fuse/Winter’s Wail. That’s a six-card investment to include this package in the deck.

Awakening is likely the strongest thing Oldhim can do. Bar. None. Having the ability to tutor up a super powerful attack (ideally matching your current fuse outlook) and playing it for free next turn with as little as a two-life deficit can create huge swings in tempo. Pitch a blue to Awakening, and you can also spend the surplus resource on bolstering your block for the turn using Rampart of Ram’s Head. Leverage Time Skippers on top of this attack for either an infused Winter’s Wail swing after your giant power attack (setting up an arsenal card for next turn), or even play a second attack action card to punish the opponent. There are many lines of play that center around the efficient and powerful use of Awakening that I will explore in-depth within the Oldhim Pro article series.

Crown of Seeds packs serious utility and value. I didn’t understand the true value of this card until I sleeved it up and started testing. This will likely be the best-in-slot for Oldhim’s head slot, beating out Arcanite Skullcap when paired with the rest of the kit.

Oldhim is built for Forged for War. With an extra equipment slot, that’s even more value from one of my favorite defensive Guardian tools. Forged for War will create three points of free defense from Crown of Seeds, Time Skippers, and Rampart of Ram’s Head, since none of these cards have battleworn, blade break, or temper when they block.

It’s hard to hit Oldhim when he doesn’t want you to- and that’s without throwing his hero ability into the mix. We minimize the use of life-gain effects to maximize the value of Awakening to swing the tempo in our favor at near-instant speed. The rest of the defensive kit makes Oldhim extremely defensive and rewards players who can be patient enough to benefit from that reality.

Subscribe to Rathe Times pro for my in-depth thoughts on my initial decklist and its evolution over time as I put Bravo on the backburner and live and breathe Oldhim for the next two months. I can’t wait to show you what Oldhim can do. 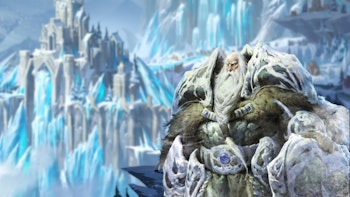 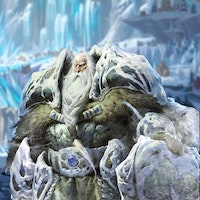 Drew invites you to walk alongside him as he develops, adapts, and refines Oldhim from new release to honed contender.

Drew Cordell has been casually competing at high levels of Magic: the Gathering for over a decade before discovering Flesh and Blood and playing obsessively. While he specializes in Guardian, Drew also writes about a wide range of Flesh and Blood concepts and classes across all skill levels. You can get full access to ALL of Drew’s decks, one-to-one mentoring designed to take your play to the next level, and much more at: https://www.patreon.com/DrewJCordell

Aggressive Starvo decks that try to fuse every turn must accept that the individual card quality is terrible. Don't settle for less.

How Bravo Kept His Title: A Sideboarding Guide

Fresh off his first place finish at The Calling: Indianapolis, Michael Hamilton shares his strategy into the major competitors in the Everfest Classic Constructed meta.

Valda may be yet another Guardian hero, but with a unique focus on card draw, her playstyle is entirely different.