In honour of those who fought for the Light, and fell in the battle against the Shadow; their names shall always be remembered. - Legend Story Studios

Memorial Ground allows you to quickly replay an attack action card. It also synergises with heroes that care about the top card of your deck. 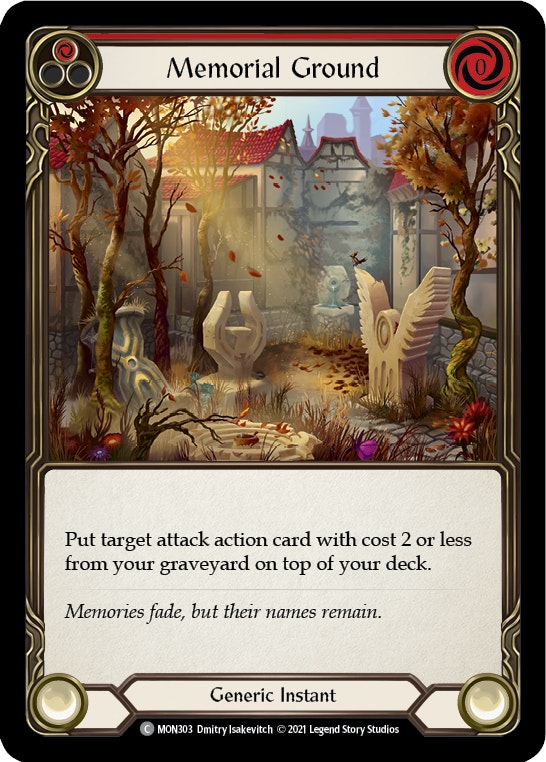 On its own, Memorial Ground is a recursion tool that provides more focused recursion than Remembrance, guaranteeing you will have the card you retrieved at the top of your deck. On the other hand, it can only pull cards of certain costs and unlike Remembrance, it does not refill your deck to help in fatigue situations (as unlike Remembrance it takes a card). If you want to keep the pressure on with multiple Command and Conquers, playing this card can guarantee you’ll have one next turn (assuming you don’t shuffle or draw first). Similarly, even a blue copy of Memorial Ground can give you an Enlightened Strike back, allowing for a flexible and powerful attack that can adapt to whatever the next turn might demand.

The biggest synergy for this card at first glance is with Azalea. Her ability strongly benefits from having a known card on the top of your deck, and Memorial Ground might be just what you need to recur powerful arrow attacks like Red in the Ledger. Further, since most or all key attacks in an Azalea deck cost one or less and the overall cost of a Ranger turn tends to be light, a yellow Memorial Ground probably offers sufficient pitch to fuel an attack turn while still being able to retrieve your best arrows.

Imagine a deck with three copies of Nock the Deathwhistle and six copies of Memorial Ground (three yellow three red) that plays dominated Red in the Ledger over and over again -- that could really put a damper on your opponent’s game plan! - Davis Kingsley

Similarly, Memorial Ground can be used to guarantee your topdeck is low pitch for abilities like the top of deck reveal on Ravenous Rabble, Bracers of Belief, or Eirina’s Prayer. For instance, if you put an Enlightened Strike or Command and Conquer on top of your deck, you’ve not only prepared a strong attack for later but also guaranteed a red card that can get the most out of your “reveal top card” effect -- and in the future if we ever see an attack card with no pitch (like Gorganian Tome), Memorial Ground could allow you to put that on top and hence play red Ravenous Rabble for five, red Eirina’s to block six arcane damage, and so on.

That’s not all, though -- Memorial Ground also synergizes with draw effects that don’t end your turn. The main use that I see for this is with Katsu -- imagine you’re about to get a card draw from Mask of Momentum, Whelming Gustwave, or even Art of War/Ancestral Empowerment. Before the draw effect resolves, you can play Memorial Ground and find the next combo piece that you need from your graveyard. Now your draw will give you the card you need to craft the perfect combo! This works especially well because you can use it in addition to Katsu’s ability on a turn and find multiple combo pieces -- for instance if you play Surging Strike and use Katsu to find Whelming Gustwave, you can then use Memorial Ground to give yourself Mugenshi: RELEASE as well if it looks like Whelming is about to hit (or just before playing Ancestral Empowerment), hence threatening the full combo even if you only had the starter to begin with.

Love what you're reading? Why not join the Rathe Times as a subscriber? Subscribers get access to all Pro Series content (currently 56), written by some of the best players and authors this side of Rathe! To subscribe, head to the FaB DB patreon page and select a Supporter+, Majestic+ or Legendary+ tier.

Further, many of Katsu’s key combo pieces are not expensive, allowing you to play a yellow or blue version of this card and hence also have the option to pitch it for Harmonized Kodachi.

Now, this card isn’t without its weaknesses. Like other instants, Memorial Ground does not block, meaning it may render you vulnerable at a key moment. We’ve already seen at least one card that can help mitigate that in other Monarch previews, though -- Rally the Rearguard -- and it’ll be interesting to see whether other incoming cards can help mitigate a potential lack of defense -- it does look like we’ll be seeing a considerable influx of instants to the game, so perhaps there will be more synergy options available in order to help decks defend well despite playing these back attacks.

One note is that the fact that Memorial Ground only works on attack actions means that it is not a good choice for Kano -- while he might normally jump at the chance to get a guaranteed topdeck of a card he’d already discarded, Kano decks tend not to play any physical attacks and the arcane damage “spells” he uses aren’t retrievable. Similarly, this doesn’t combo as well with Dorinthea’s draw effects as one might think at first glance, since much of her offense is focused on her weapon (and this is especially true on Steelblade Supremacy turns where you might be drawing). That said, Kano and Dorinthea certainly need the help less than Azalea does…

All in all, I think Memorial Ground is an interesting card with the potential to do a lot for Ranger in particular, Katsu as well, and perhaps others on top of that. It won’t be a staple in every deck, with heroes that don’t use attack actions much not getting much out of it, but for certain builds I think this one will be quite strong -- at least if they find a good way to mitigate the lack of defense.

Absolutely adore this card, can't wait to throw it in some Ranger decks :D

The sands beneath their feet slip and stream and suddenly rush ahead of them, swirling and forming. They had not considered the desert floor ash before, but as they stood before the draconic illusionist, their mistake became clear: her tools were all around them.