Can you make a grander entrance than riding on the back of a dragon? Dromai made her debut in dramatic fashion, and brings with her an impressive suite of allies.

Dromai plays within the Illusionist sandbox in a completely different way than Prism did. While Prism invites the powerful Spectra and Heralds of Solana to her aid, Dromai summons the legendary dragons of old to strike fear into the hearts of her foes. Legend Story Studios has made it clear that the true bond between Illusionists is that they wield the power to beckon enigmas into battle.

A baseline understanding of the Illusionist class is discussed further in the Prism 101.

The Draconic Illusionist strategy varies greatly from the Light Illusionist in that she does not rely on shields or auras to confuse her opponent. Dromai takes a more “in your face” route and Invokes Dragon Allies to fight for her. In the arid and volcanic land of Volcor, she trained the Ash to heed her commands.

Manifesting her ability to reshape reality, she can Transform this ash into a fierce and powerful dragon to fight by her side, but with one major setback: Phantasm. This mechanic allows her opponent to expose reality and vanquish an Illusionist trick by defending with an attack of 6 or more power.

While both utilize a wide board to attack, Dromai needs to worry about the phantasm tag on her allies- something Prism's auras aren't concerned about. Dromai's allies can also be attacked- legitimately attacked, resolved, and dealt damage- making her uniquely susceptible to on-hit effects.

You may have noticed that, while Dragons have attack values, they do not inherently have a way to attack. Dromai must rely on her weapon to give her dragons direction. As of this writing, Dromai only has one weapon in which her dragons will obey: Storm of Sandikai. This allows her dragons to attack once per turn for 0 cost.

Dromai comes to us as one of two new Draconic heroes, hailing from the region of Volcor. Dromai rewards us for playing as many red pitch cards in her deck as possible and reaps the benefits in a myriad of ways.

Whenever you pitch a red card, create an Ash token.

If you’ve played a red card this turn, dragons you control have Go Again.

The goal is to utilize her hero ability to generate and store ash throughout the course of the game so that you can transform dragons when they come into hand. No ash = no dragons; but thankfully, all the dragons in her deck are red stripe, so you can pitch them early to pay for attacks and gain ash. Then, once you’ve established some dragons on the board, all you must do is play one red card and you can begin your reign of fury with your dragon allies.

Pro Tip: End your turn by tucking a 0-cost red card in your arsenal, so that if you’re forced to block with your entire hand, you can still give your dragon army go again. Sigil of Solace is a great one!

The inherent traits of the Illusionist class have remained relatively consistent with this new addition. There are two main paths one can expect to choose from: aggro and setup. The former focuses on utilizing low-cost attacks with natural or inherited go again capabilities. The latter focuses more on heavy defense and creating a dominating board state of dragons that force the opponent to either deal with them or succumb to them.

The Illusionist class doesn’t have many natural go again cards to make this engine purr like it should- the class pool consists of Sweeping Blow, Billowing Mirage, Spears of Surreality, and Dunebreaker Cenipai, with the last 2 burdened with the vulnerable phantasm keyword- but Dromai can make use of the generic card pool. Cards like Ravenous Rabble, Scar for a Scar, and tools such as Lead the Charge can give many of her powerful cards the ability to keep the chain going. Dromai also has access to many Draconic attacks that have natural or conditional go again, such as Blaze Headlong.

Keep in mind that many of her go again attacks cost 1 resource, but that’s where the second half of her aggro engine comes into play. Early- to mid-game you’ll find yourself with a lot of ash, and it’s at this point you’ll need to begin generating Aether Ashwings. Start your turn with Uprising, play out a red Rake the Embers, transform three of your ash tokens into Ashwings, unleash a swarm of pesky dragons onto your opponent, and then finish the chain with a Red Hot for a harsh blow.

This playstyle is reminiscent of the Aura Prism gameplan, in which you want to defend against high damage output and nasty on-hit triggers all while establishing a board state.

These days, most players will take out your dragons as soon as they see them- Prism showed just how quickly things can get out of hand. To combat this, we rely heavily on pitch stacking. Pitching away your 0-cost dragons early game to pay for attacks ensures that you’re gaining ash and will see the free dragons on the second cycle.﻿

This kind of Dromai player will utilize defensive tech such as Sink Below, Fate Foreseen, Oasis Respite, and life gain with Sigil of Solace. During the early stages of the game, you’ll be leaning into Rake the Embers to create Ashwings and deploying many of your 1-cost dragons, such as Kyloria, to protect your hero’s life total.

Early in the game, you’ll be looking to invoke Tomeltai so that you can destroy oppressive enemy equipment such as Mask of Momentum or Tectonic Plating. Towards the latter half of the game, tuck Dracona Optimai into your arsenal and unleash the strongest ally in the game, dealing up to 12 damage to your opponent…with go again!

Just as we observed with our beloved Prism, the Illusionist class required passion, time, and determination to master. Each time we turn a new chapter in Flesh and Blood, the heroes are becoming more complex, and the pool is getting ever deeper. The playstyles I’ve depicted require a lot of practice, and I’ve personally experienced some frustration on my journey to discovering the playstyle that I enjoy. One may argue that a hybrid version of the aggro and control playstyle may be the best option, but that’s where I encourage you to fill in the gaps! Play around with different iterations of Dromai and don’t be afraid to try something unconventional.

If the heavy dragon/control playstyle piques your interest, check out my Dromai deck here!

If you’d like a further breakdown into what makes Dromai tick and explore the deck brewing process, check out The Art of Ash: Brewing Dromai for Classic Constructed for more ideas. 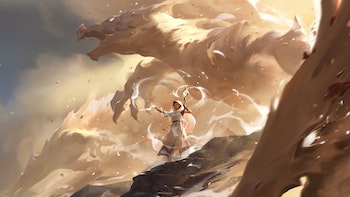 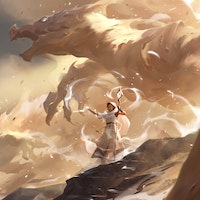 The Art of Ash: Brewing Dromai for Classic Constructed

Dromai has been making a strong impression in the early Uprising tournament scene, but her playstyle is anything but intuitive. Kevin offers a core understanding of Dromai's strategy to work from no matter which build you pursue.

Parker Brown has been both casually and competitively playing Flesh and Blood since early 2021. A self proclaimed collector-turned-player, Parker was drawn into Flesh and Blood by its unique and darker themed art style. Parker is a Viserai player at heart, but has been known to study the mechanics of every hero in the world of Rathe. He enjoys writing on topics such as metagame strategy, deck building, and more.

Burn Them All: An Aggressive Dromai Decklist

Parker Brown has a decklist that pushes Dromai aggressively- but holds a defensive sideboard just in case.

The Illusion Fades: Moving on from Prism, Sculptor of Arc Light

As Prism joins the Living Legends of Classic Constructed, Light Illusionist players will need to decide where to go from here. James Adams examines Prism's central features and draws parallels to other heroes in the game.

The Art of Ash: Brewing Dromai for Classic Constructed

Dromai has been making a strong impression in the early Uprising tournament scene, but her playstyle is anything but intuitive. Kevin offers a core understanding of Dromai's strategy to work from no matter which build you pursue.