In this 5-part series, Gemini focuses on the evolution of the beginner. His goal is to elevate you into a more confident and competitive player. Gemini presents challenging scenarios and offers difficult questions with the hopes of getting you thinking about Flesh and Blood on a whole new level. Let's begin with the backbone of all trading card games, the cards themselves.

Welcome to my Bolstering the Beginner series, where we'll walk along together, discussing ideas, posing questions, and analyzing cards to elevate your play. You're new, I get it, and we've all been there. You've read the rulebook, played a few games with your intro deck, and now you've been cast into the meta. It can be daunting and downright scary, but that doesn't mean you're not ready to dive in with the best of them. So strap in, and let's get you prepared to play Flesh and Blood - and play it well. 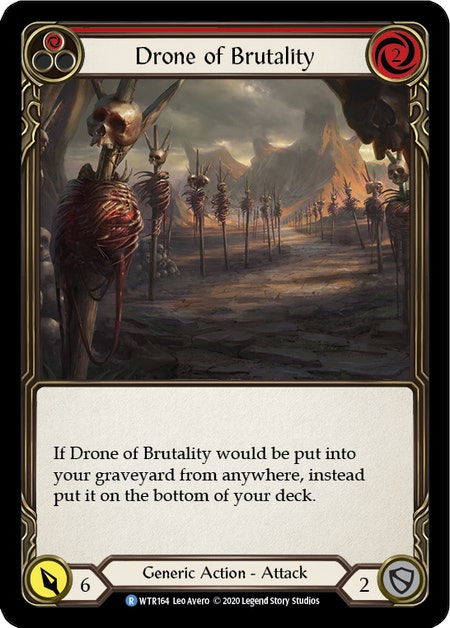 As well as I do, you know that ripping the seal on a new pack of cards can be exhilarating. A mixture of mystery and hope swirls in your mind as you flip through that crisp new pile of cardboard. But what are you even looking at? Some commons, rares, ooh, there's a majestic. What does it all mean?

I remember opening my first pack of Welcome to Rathe, staring at a red Drone of Brutality and thinking, "Hmm, cool effect, hits for six damage, only costs two resources, not bad, not bad. Wait! It only blocks for two? What a trash card."

However, after seeing my opponent put it to great use against me, I soon realized that my initial impression of that card was entirely wrong.

Thankfully, recognizing powerful and effective cards in Flesh and Blood is a skill within your grasp. Let's dive into a few ideas that will help you determine for yourself whether that card is, in fact, a "good" card.

These Cards Have Words on Them

When judging a card, the first thing you need to ask yourself is, "What information does this card convey?" 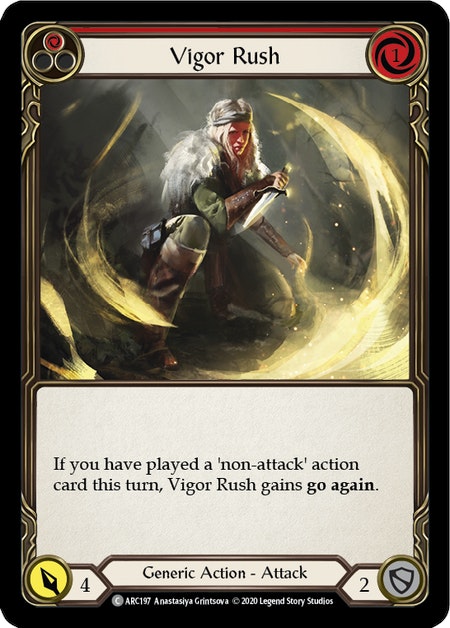 As you can see, Vigor Rush is a generic attack action that pitches to produce one resource, costs one resource to play, swings for four damage (very relevant), and blocks for two. Additionally, it has a conditional effect that can give it go again as long as you've played a ‘non-attack’ action card this turn. At first glance, this card seems very strong, but let's dive deeper.

If the game isn't going as planned and you find yourself desperately needing to block your opponent's incoming attack, you can always use Vigor Rush to defend. But, as shown in the bottom right corner, Vigor Rush only defends for two, and sometimes that may not be enough. Other times you'll need to defend with an additional card to withstand the incoming damage. Cards need to stand firm on their own, and Vigor Rush, in some cases, may fall short.

Draw your eyes to the bottom left corner of the card. Like I said before, four damage is very relevant. As you know, most cards block for an average of three and having a base damage output of four means that your Vigor Rush is likely to hit for one damage when you attack with it. Of course, your opponent can use a defense reaction, like red Sink Below, to stop it; but defense reactions like that are more commonly used to halt powerful "on-hit" effects (more on that later on in the series). So, four damage, relatively strong, but how much did it cost you to do that?

Now direct your gaze to the top right corner. Vigor Rush costs one resource. Hmm, not terrible, but not great either. Cards in Flesh and Blood don't always have a resource cost (e.g., Scar for a Scar), so if a card costs you resources, it needs to have more of an upside than just four damage.

That brings us to the card effect positioned on the bottom half of the card. Whenever a card says "If…" you need to ask yourself, "Can I meet this condition to achieve this effect?" If your deck isn't built around meeting that condition, then that card may not be the best fit for your list.

Vigor Rush requires that you have played a ‘non-attack’ action card before this to give it go again. Don't get me wrong, go again is a potent effect in Flesh and Blood, but Vigor Rush has "conditional" go again. It boils down to you jumping through hoops, playing more cards, or committing more resources to make this card "good." You want to avoid being in this position. If a card has a strong effect dependent upon another card or effect, then it begins to lean to the side of being a "bad" card.

All this to say, the cards in Flesh and Blood are beyond beautiful, and some are very rare, but the information they convey is the first indicator of its effectiveness.

Wow, This Card is Free to Play!

After analyzing Vigor Rush, you may start to ask yourself, "What IS an acceptable cost for four damage and a similar effect?" I present to you Scar for a Scar. 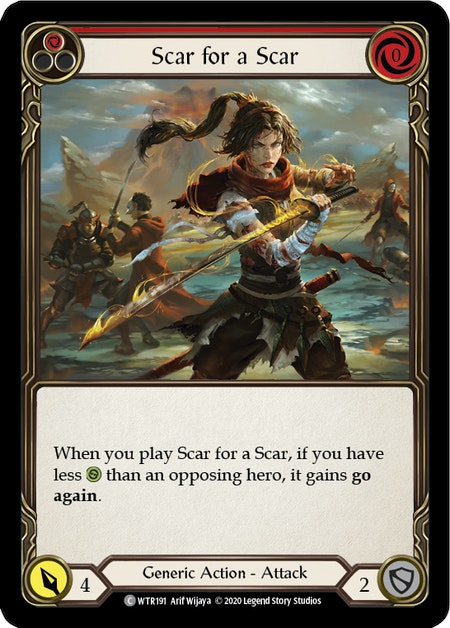 Walking along the same path, Scar for a Scar defends two damage and presents four damage, the same as Vigor Rush. But, it costs zero resources to play. That's cheaper than Vigor Rush, but what about the effect? Once again, we have an "If…" condition to meet. "When you play Scar for a Scar, if you have less life than your opponent, it gains go again." Ok, this card has the potential to have go again, as long as that condition is met.

Now ask yourself, "Does this condition actually cost me anything?" Does it cost more resources or more cards? Not really, no. Your life total fluctuates throughout the game, and if you think of your life as a resource, YOU control that (or at least you try to). Scar for a Scar swings for the same amount of damage as Vigor Rush, but is cheaper to play and can easily get go again without a 2nd card, so long as you time it right.

Based on these facts, I would say that Scar for a Scar is "better" than Vigor Rush.

It's More Than Just Attacking

Comparison is a great way to determine if a card is "good," but not all cards fit into the same rubric. Comparisons don't come so easy. Instants and defense reactions are very much so judged on their cost and effectiveness against a particular opponent, maybe even the format they are played in.

Take Sigil of Solace. Costs zero resources and instantly gains me three life? Sign me up!

What if your opponent has a weapon that attacks for six damage? Meet the Sledge of Anvilheim.

Let's say you have one card in your hand, and Sledge is hurtling toward you for a respectable six damage. Would you rather have Sigil of Solace or Sink Below? Sigil gives you three life right now, effectively mitigating half the damage of the Sledge. On the flip side, if you play Sink Below, you would be mitigating one more point of damage along with gaining an additional effect of filtering a card.

Let's hover even further above this idea. When comparing Sigil of Solace and Sink Below, which would you rather have in a game of Blitz? Usually, Sigil represents nearly 1/7th of your life in Blitz, but in the Constructed format, it's roughly 1/13th. Not as much of an impact in Constructed, wouldn't you say?

How effective is this card when facing certain opponents (and in specific formats), is another question you have to ask yourself when judging a card. And to do that, you have to get to the table and see it for yourself.

Can I Get a List of All the Good Cards?

If I had a list of all the "good" cards, I'd gladly give it to you, but that list (if it exists) is in a constant state of flux. With new decks and new cards emerging month after month, "good" cards become "bad," unplayable cards suddenly see play, and based on the latest spoiler, that hero is now a powerhouse.

My goal is to open your eyes to the ideas that help me determine if a card is "good" and deserves a spot in my lists. Consider its cost, effect, upsides, and downsides. Is it "good" standing alone as the only card in your hand? Does it have use against all the heroes in the meta? Maybe it's good in your meta but not in mine. YOU determine the "good" cards.

If you've come here looking for answers, you'll get quite the opposite. I'm here to empower you to start asking questions instead of seeking solutions. The game is new, and the realm is uncharted. No one has authority over any idea or concept, not even me. So, grab some packs, crack them open, and convince me why that card your holding is "good." I bet you're right.

Gemini is a Flesh and Blood ambassador in Southern Colorado and a lifelong card gamer. He has dedicated himself to bringing together the Flesh and Blood community and has taught over 100 people the game. Gemini can be found at his LGS four to five days a week, teaching, testing, and spreading the good word about FAB. He, along with his vibrant gaming community, hopes to be a long-standing pillar of dedication and support for this wonderful game.

The first time you face down arcane damage, it can feel unblockable; and even with experience, adjusting your gameplan to arcane prevention can feel like a nuisance. Here are some techniques to help your arcane blocking game.

With a third Ice hero dropping Frostbites in Classic Constructed, disruption strategies have never been more prevalent. To truly prepare for the meta, you need to expect the unexpected.

Always the Underdog: Tips for Maining Outside the Mainstream

Entering competitive tournaments doesn't have to mean you set aside your favorite hero. Alex shares his tips on honing your skills and refining your deck to pilot your main into any field.