(Note that this piece does not incorporate stats from the last weekend of Road to Nationals.)

I’ve been doing some digging in the FAB Results Tracker recently and found something that I thought was especially striking. In the overall meta, Chane is excelling, with more Road to Nationals events won than any other hero by a significant margin. However, in continental Europe things are looking a little different. Take a look at this: 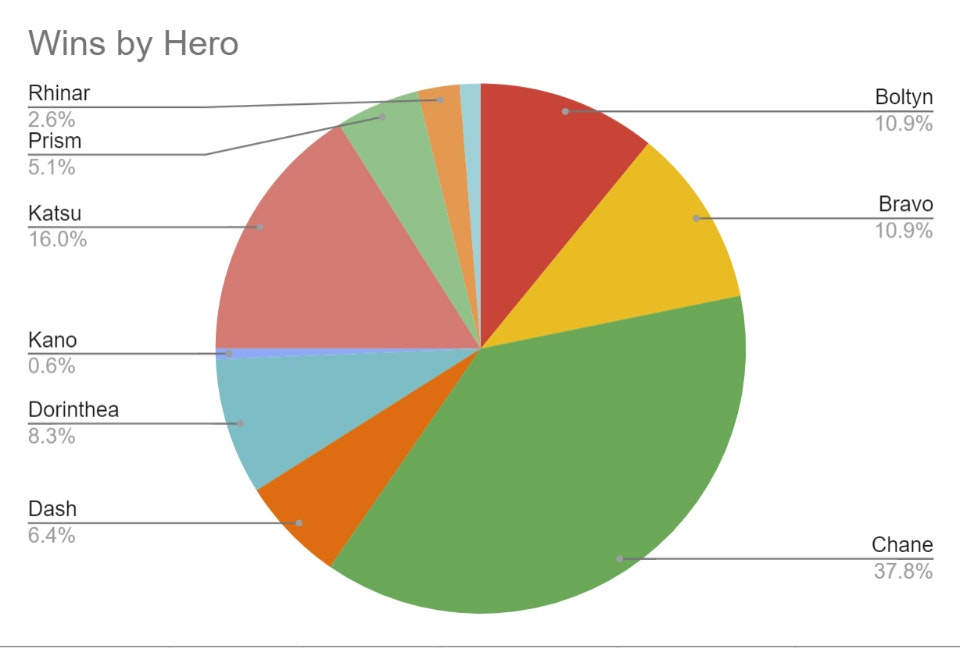 Here are the stats for wins by hero for the entire world... 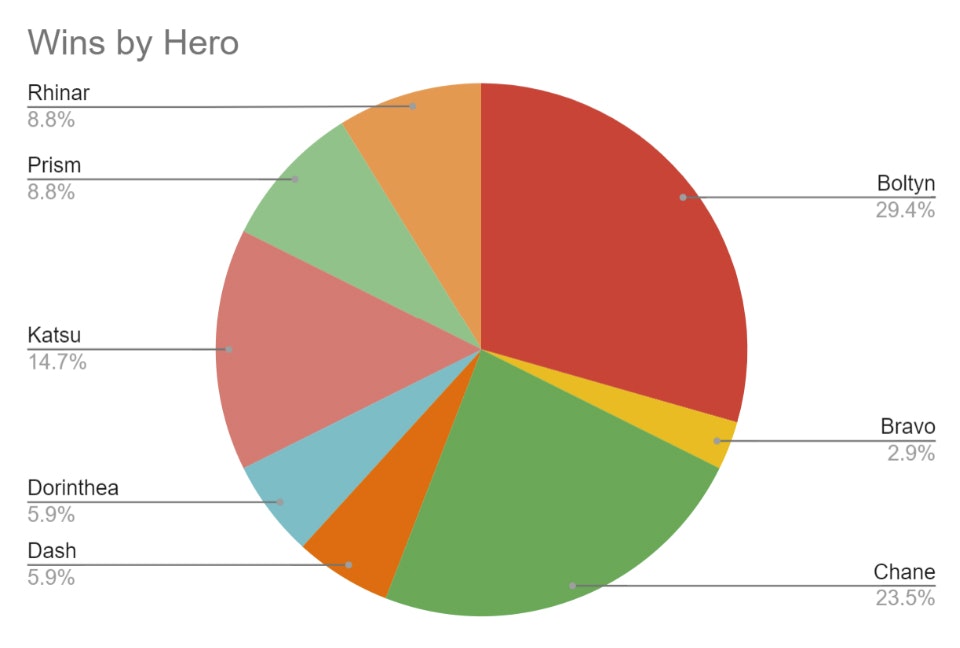 ...and here are those for continental Europe only. Notice something?

For whatever reason, Ser Boltyn- a hero that’s doing decently well but by no means dominating the overall meta- is actually the most successful hero in continental Europe!

(I excluded the UK from this comparison because the two regions have different metas with limited crossover; including the UK in the European data would give Chane one more win, while Katsu and Dorinthea would pick up three each.)

It’s also notable that these successes have come with multiple different styles of deck. Boltyn has put some wins on the board with three different approaches. These decks are mostly defined by their weapon choice- either Raydn (this deck plays a bit in between setup and aggro), Cintari Sabers (combo), or a hybrid deck that runs both Raydn and the Sabers and can decide which to use based on the opponent. That said, Saber combo has been the most successful thus far. With the data available to me at writing, Boltyn has scored seventeen wins in the Road to Nationals season; ten of those wins were with the Cintari Sabers, five with Raydn, and two with hybrid decks that run both.

I recently recorded a video demonstrating the difference between the Saber and Raydn builds in an interesting mirror match. In short, the saber build combines Cintari Sabers, Courage of Bladehold, Boltyn’s hero ability, and multiple copies of Lumina Ascension to swing many times in a turn, potentially either killing the opponent or swinging the game so heavily that they can close things out afterwards; while the Raydn build plays more of an aggro or setup game.

Like Katsu, the same hero can play quite different styles and you need to be careful when sideboarding that you don’t sideboard for the wrong strategy! The “hybrid” decks that can run either Raydn or Sabers are especially threatening in this regard, as even if you’ve scouted the deck there’s a chance they will change up their strategy and take you by surprise. That said, because they need to run sideboard cards to support the other strategy, they probably will end up being somewhat weaker at executing each strategy than a dedicated build would be.

I think a big factor in Boltyn’s success has been the Cintari Sabers combo version of the build. Unlike most decks, it can potentially win the game in one turn. More than half of Boltyn’s Road to Nationals wins have been with this combination. Here’s how the basic game plan works:

In order to get more insight into the Saber deck, I decided to interview CATS, a European player from the FAB Discord who has had notable success with Saber Boltyn in competitive play: two Road to Nationals wins and a second place to boot! Here’s what he had to say about Boltyn and the European scene:

Davis: Can you give us a quick rundown of your gaming background and how this Road to Nationals season went for you?

CATS: I started playing TCGs around 27 years ago and have played over a hundred different TCGs/CCGs/LCGs. I also played some RPGs, regular board games and tabletop games, but mostly TCG games. I also played some of those competitively, like the Game of Thrones TCG/LCG, Star Wars CCG, or the Lord of the Rings CCG.

My RtN season went quite well, I played in 3 RtNs, getting 2nd place in the first and winning the other 2 for a total record of 22-2 in RtN games. I couldn’t have hoped for a better result, as my goal was to get both of the playmats as I knew I would qualify through points anyway.

Davis: What attracted you to playing Boltyn in particular, and why Sabers instead of Raydn?

CATS: I once watched Mariusz Suchanecki playing a Saber Boltyn deck in Blitz format on the FaB Discord Gauntlet stream. I already liked Boltyn from his background story and I always like to try out new decks and immediately copied the deck and tried it in an armory. I won every game except against Kano and it was quite apparent that the deck has an autoloss against Kano in Blitz, so I shelved the deck. When the RtN season was announced I had never played a single game of CC and was wondering what deck I should play. I was always planning to play Dash in CC, but with everyone saying it’s dead to Chane and was still playing Blitz armories as well and often played Dash in Blitz.

So I thought, hey, I still got this Boltyn deck I am not playing in Blitz anyway and Kano isn’t as popular in Blitz and I can sideboard for him, making the matchup better if he does. So I adapted the deck for CC and had immediate success, winning over 90% of my games. It was soon apparent that the deck has difficulty finishing the opponent after the combo with the list being as it was and so I changed it to be able to play a regular gameplan and be more flexible. I also knew that having experience with a deck and it’s matchups is worth a lot in FaB, so I planned to stick with it for the whole RtN season.

Davis: Why do your think Boltyn has done so well in Europe?

CATS: [Because FAB took so long to get to Europe], players in Europe are quite inexperienced frankly, especially when it comes to CC. Most only picked up CC right before the RtN season like me, and not everyone can play 4-5 armories a week like I do (7-8 when I was still grinding XP points).

The second reason is that some players switch decks regularly and don’t take the time to learn it with all its intricacies and matchups. Saber Boltyn was also regarded as a meme deck and no one really played it, so I wasn’t expecting people to tech against it or have testing experience against it and that proved true at least in some cases. A lot of the Saber Boltyn players I have seen were quite bad and running suboptimal lists, but still got good results just on the strength of the combo alone, the easy to play basic gameplan (if you don’t have to adjust to your opponent trying to outplay you), and the inexperience of the playerbase.

Davis: What do you more like and dislike seeing across the table from you, as a Sabers player?

CATS: What I like to see the most is Prism, Katsu and Dash, especially the more controllish variants. Aggro Dash and Katsu less so.

What I don’t like to see is Kano (though my latest version is more teched against him), Chane- especially if they actually run cards that can disrupt your combo turn aside of CnC- and Bravo, as they naturally run a lot of cards that can disrupt your combo turn. Dorinthea can also be very challenging for Boltyn in general, as she doesn’t run a lot of attack actions, if at all.

That being said, I haven’t lost a lot of games to any of these heroes, but that in part has to do with the power of the combo and in part with inexperienced players.

Davis: Any tips or suggestions for other players who might be thinking of picking up Boltyn?

CATS: If you want to pick up Boltyn, dedicate yourself to learning the deck and it’s matchups. For Saber Boltyn in particular, don’t rely entirely on the combo, because there will be games where you just don’t see the pieces in time or the opponent is a good player and has a plan to deal with it. Also be aware that Tales of Aria brings heroes with abilities that make things a lot harder for the deck, so it might be too late already. Lexi and Oldhim bring Frostbite tokens, and Briar can get non-attack actions to a block value of 5, being able to single card block saber swings. In addition, any Runeblade running the legendary boots and Chains of Eminence can destroy the combo with no way around- like the Timesnap Potion provided for Arc Light Sentinel.

A big thank you to CATS for answering my questions here, and congratulations on his performance in the Road to Nationals season! I thought his views here were quite informative, especially when it comes to player experience and unfamiliarity — combo decks can often be overwhelming against players who aren’t experienced against them or know what to look out for.

If you want to get a more in-depth view of how to counter the Saber combo, I would recommend checking out Arsenal Pass’s recent video on the topic.

My biggest mistake in the Vegas Calling was misplaying against Sabers Boltyn. I was Bravo and had over 40 health for most of the game. I survived the double Lumina turn, but didn't respect a potential Beacon turn. I blocked low because I had the lethal shot in hand. I should have maxed out my block and ensured that I would live to see another day.

I've been pretty dedicated to Raydn every time I saw sabre decks or axe decks in the wild they ran alot of Dori stuff and the only challenge was they run alot of non attacks but was never impressed with them. I think seeing these optimized sabre decks I am going to switch to a hybrid approach. I think moving forward that flexibility will be real good for Boltyn.

FAB101: Dorinthea and the Warrior Class

Warriors live by the sword. Bluff your opponent with reactions that climb over defenses.

Priming the Prodigy: The New Dorinthea in Blitz

The new Classic Battles box has gotten a lot of attention for Dorinthea's new specialization. But does the new Quicksilver Prodigy create fresh opportunities for Dori in Blitz?

Meanwhile, In the Deserts of Volcor...

The Everfest may be in full swing, but elsewhere in Rathe, Kassai is preparing for a Blitz. A recent influx of support has pushed this young Warrior to the forefront of the class. Will you be prepared for the Cintari Sellsword?