If the recent Boltyn preview has taught me anything,

it's that a lot of people feel Warrior is too strong. Dawnblade seems to find a way to poke some damage through every time, and the constant threat of snowballing +1 tokens requires blocking even as Reprise punishes it. Of course, that's because most Warriors are using Dawnblade every turn- the entire Warrior card pool does nothing but support the use of a familiar weapon.

Many competitive players will tell you that consistency is the strongest tool in your toolkit. Most decisions made during deck construction are about improving consistency. And what can be more consistent than your weapon? That's why the majority of Warrior decks are built exclusively around the Dawnblade. If every card in your deck has synergy with it, you'll never draw a bad hand. Right?

That consistent gameplan leads to redundant gameplay. When facing Dorinthea, you may feel like you're being asked the same question turn after turn. And because of how Reactions work, the answer each time feels pretty arbitrary.

Many competitive players will tell you that consistency is the strongest tool in your toolkit.

Strong decks attract hate. Sometimes, that's fun- I think we all kinda loved hating Ira during the CRU meta. There's a certain need for a villain in collectible games. But when a particular class has been reliably strong across multiple sets, it can get a little tiring.

That's only exacerbated by the nature of Warrior card design. While Dorinthea players are intimately aware of how much change has happened in Warrior deck building across 3 sets, Dorinthea's opponents don't feel those changes. To them, it's still "Dawnblade for 3; how high do you think I can climb?"

There's a certain need for a villain in collectible games.

So why am I saying that Monarch's Light Warrior is a good thing for those who feel Warrior has overstayed its welcome?

Once a player has found a deck that works, there are precious few incentives to change. Sure, at your casual local scene, you can expect plenty of experimentation. But when prizes and reputation are on the line, few will abandon what works. The competitive tournament meta is only changed by two factors: escalation or innovation.

Escalation is when a new deck takes on the role that an established competitive deck used to play, and does it better. Gamers commonly call this 'power creep'. The viable strategy remains the same; the cards you use to execute that strategy change.

Innovation is when a new strategy challenges the established competitive deck, and either exploits its weaknesses or ignores its strengths. This dynamic is responsible for gamers calling the power structure of tournament decks 'the meta'; metagaming is making your strategic decisions based not on the game objectively, but on the strategic decisions you believe other players will make.

The competitive tournament meta is only changed by two factors: escalation or innovation.

Typically, escalation-based meta changes go through peaks and valleys with new releases. Which makes sense: if the strategy is well established, it shouldn't take long to identify the new cards that push that strategy. This is commonly what concerns players when new content is given to an established competitive deck. In this case, players are looking at an already-strong Dorinthea deck and seeing how a few new cards could be strong in there.

Innovation-based changes, on the other hand, have no real season. While new sets give ample opportunity for inspiration to strike, innovation is just as likely to arise due to a particular tournament landscape, an online conversation, or a janky deck building enthusiast. Innovation tends to be what players enjoy in a set release: new strategies, new decks, a fresh landscape. 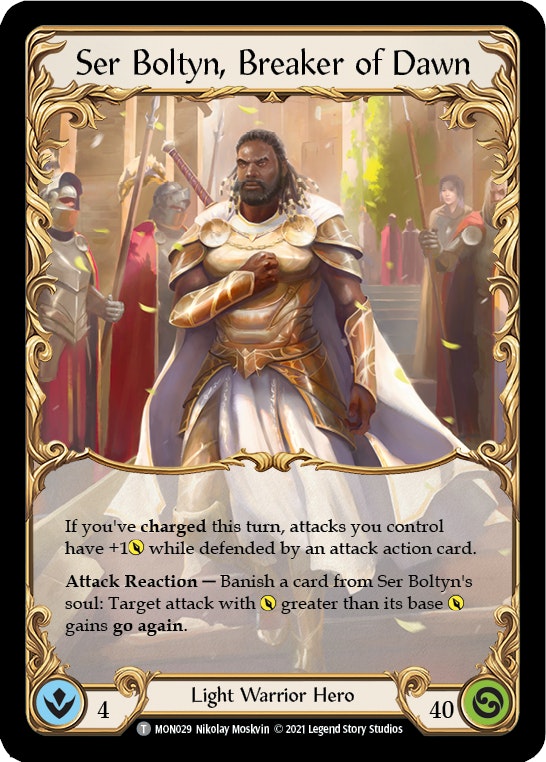 Warrior's new Monarch card pool certainly looks, at first glance, like escalation. But while there are a few cards that may improve Dorinthea's game plan, the vast majority of cards support the new hero, Boltyn. This is the perfect way to get into the head of a Warrior player, who was looking at Monarch to improve their Dorinthea game and now is faced with choice. Because switching classes can be expensive, but switching heroes is cheap.

Boltyn introduces variety. He splits the Warrior card pool into two distinct strategies. For every Dusk Path Pilgrimage, there's a Spill Blood- and every time a Warrior player switches their strategy, the meta shifts.

Boltyn has no qualms with getting blocked. He modifies damage for the sake of modifying damage; he's not invested in that hit like Dorinthea is. And because of the added Light card pool, Boltyn should often present attack actions in conjunction with his weapon hits.

Additionally, Boltyn's Soul Charging requires initial investment to make use of. Boltyn will have to spend cards to draw off that power, shorting him on resources in the early game. His will truly be a dynamic, shifting strategy as the game progresses.

Make no mistake, Dorinthea will improve with the release of new cards. But Dorinthea was always going to improve, even if only from generic cards. And even if she didn't- even if Warrior received no support in Monarch, and the Dorinthea deck of the new meta was the same as the old- it was unlikely you'd see Warrior mains walk away from the class. Boltyn is the most disruptive option, short of systematically raising the power level of all other classes or nerfing Warrior. Boltyn will split the Warrior camp. You can thank him later.

The FaB Cube Part 1: Making the Case for Cube

Mark makes the case for draft as the premiere format for Flesh and Blood, laying the groundwork for his series on constructing a FaB Cube.

Tales of Aria: Theorycrafting and Speculating on a New Release

Drew shares his best practices and tips to get the most out of a new set and logically evaluate the merits of new cards, both financially and in your own deckbuilding.

Seeds and Duskblade Banned! Where Does Chane Go From Here?

Chane loses a key card and gets denied a new one! What does this mean for the ubiquitous Shadow Runeblade?