The aura build of Prism is, without a doubt, the most convoluted and unintuitive deck I have ever played in my time as a Flesh and Blood player. The deck essentially takes what every other class does and throws it all out the window. You are only ever attacking if it serves to progress your late game plan, and you have to be actively thinking about your lines of play during each and every aspect of a game, be it during your turn, your opponents turns, or somewhere in between. The goal of the deck is to “sculpt your pitch” in such a way that you can accrue so much value on one turn that you “lock” your opponent out of the game. It does this by enabling a specific series of draws you set up earlier in the game, which include the pitch of every Tome of Divinity you see, specific auras, the set up of Timesnap Potions earlier in the game, and the use of Tome of Fyendal out of arsenal. If you like convoluted, intricate decks that require you to think, this might just be the deck for you.

With the possible exception of Viserai, this deck is a vastly different beast than every other deck in Flesh and Blood, in that you’re not looking to kill your opponent at all during the first 10 or so turns of the game. The only point at which you're actually attacking is when it serves to pitch a card for late game, or to get rid of cards in hand to reach your pitched cards faster. Exerting pressure is not the goal of the deck – you do plenty of that in the later turns of the game. All you are looking to do is survive.

Playing the deck is a convoluted and rather weird experience in that no two games will ever be the same. Your lines of play are the same, but the ways that you reach them are different due to the way the deck wants to play.

When you go into your “pop off” turn, you want to have 3 things set up:

Going Into Your Winning Turn

The very first thing you do when you go into your blowout turn is get Vestige of Sol online. This can be done with Genesis or Halo of Illumination.

After that, you play all of your cards that draw you cards, chaining these together to put as many cards into your hand as possible.

After you have drawn as deep into your pitch as possible, you play the final Tome of Fyendal out of arsenal to gain as much life as possible and proceed to play every aura out of your hand.

You should end this turn with at the very least 2 auras and 4 spectral shield tokens (usually more auras). Try to end the turn with an Arc Light Sentinel on board to essentially force the opponent to pass back to you.

After you've 'popped off', you now transition to an endgame strategy. You want to pressure your opponent’s life total by 12-16 each turn; on the turns where you've only attacked for 12, you should now either have an aura or spectral shield in arsenal and be able to play it the following turn while sustaining that pressure. If the game gets to this point, your opponent is stuck attacking a sea of auras, letting you attack with impunity each turn with the auras that remain.

Over the course of the game, each decision you make- from the cards you pitch to the abilities you activate to the cards you blocks with- should all be made towards the idea that you will win the game if you cycle your entire deck. Before starting your turn, think about what the bottom of your deck looks like, and what cards you have in your hand. Your turn should look something like this: 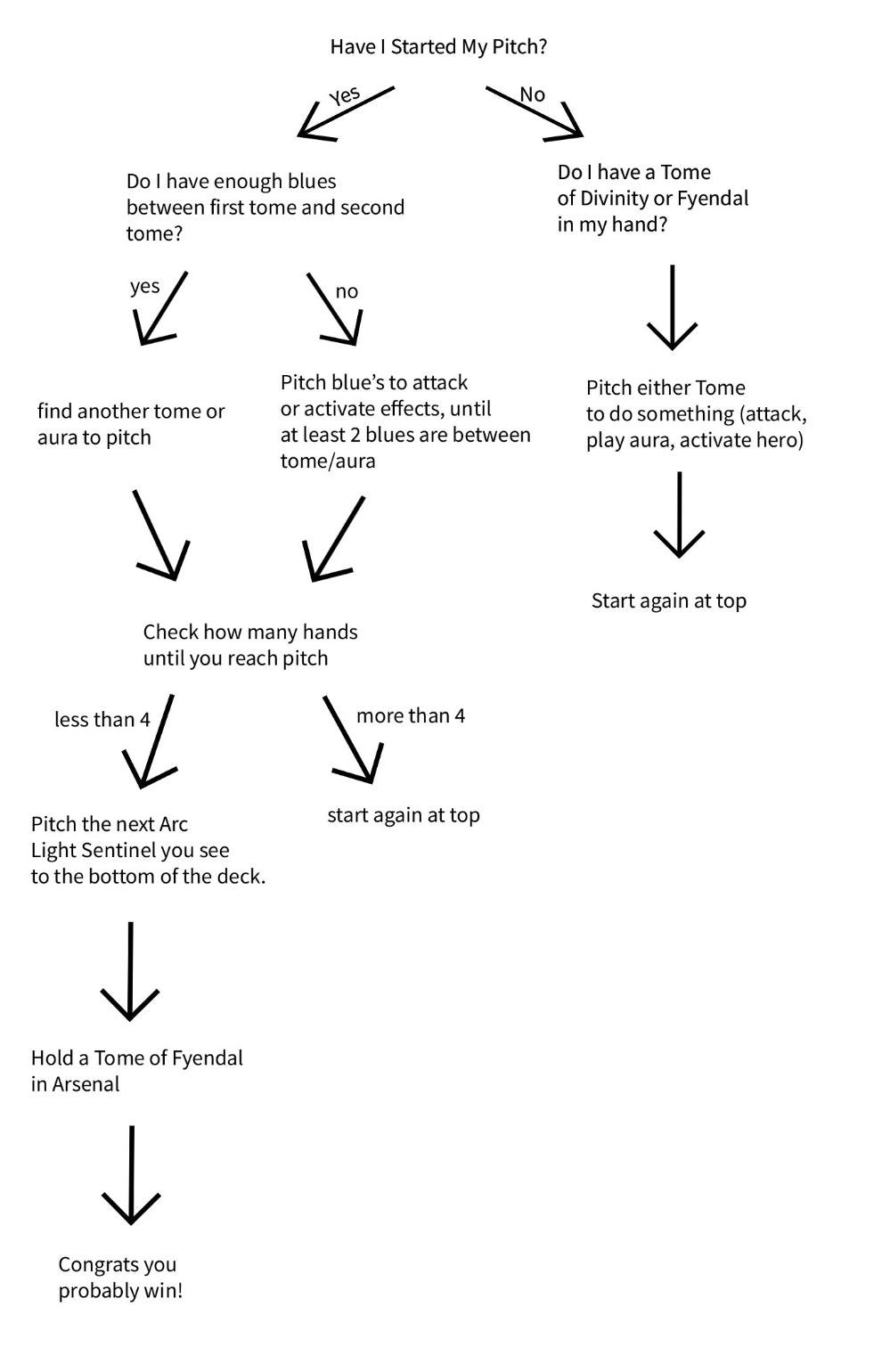 Unfortunately, the opponent exists, and this table is not the be-all-end-all of the deck. Your pitch will very rarely look like the ideal pile (Divinity, Blue, Blue, Divinity, Aura, Blue, Aura, Fyendal/Divinity, Blue, Blue, Aura, Prismatic Shield, Blue) and will not all happen on one turn due to your need to survive and get to this point in the game. But as long as your pitch looks even roughly like this, you will gain so much tempo and value over 1-2 turns your opponent will not be able to get back into the game, between the life gain from Tome of Fyendal and the massive pressure your auras represent.

In the above table, the very first step of “Have I started my Pitch?” refers to you having begun actively pitching cards towards your late game plan. This step can only happen when you see your first Tome, as that is what you need to crack your pitch for the first time, letting you draw into the rest of your deck. Until this happens, you want to be cycling through your deck as fast as possible while taking as little damage as possible.

The complicated “lines” come into play when you reach the decision steps in the above table. Deciding to pitch an aura instead of playing it, finding ways to sculpt the correct pitch even through bad hands, and deciding when to make shield tokens are all decision points and skills that must be navigated to play the deck optimally.

But beyond all of this is the ability to memorize and plan multiple turns in advance in the midst of piloting the deck. This is a useful skill to develop to play Flesh and Blood at a high level, but it is an essential skill to play this deck at all. In my own testing, I found that recording my pitch on a pad of paper for the first 30 games proved incredibly helpful in practicing my lines of play and getting used to the timings of drawing into my pitch. The ability to know exactly what turn you will draw into your pitch on is required to take your Aura Control skills to the next level. That's because, to have an ideal turn, you need the three things set up: Timesnap, Fyendal in Arsenal, and a sculpted pitch.

Chane is a bit of an odd case, as in this match up you will never see your pitched cards; so we side out of the “One-Turn Kill” strategy and lean into a far more active control strategy. This is accomplished by boarding out all of the 0 defense cards- low impact cards that are in the deck to facilitate the combo plan of the deck. Potions, Tome of Fyendal, and Soul Food are all cards that work incredibly well when you see your pitch- but when you live and die by how well you can attack and defend, the cards are just dead in your hand. Chane is the only matchup currently that the OTK strategy does not work against, due to the nature of his mechanic; every other matchup is winnable if you can reach your late game turns.

It seems that, against Chane, you play a deck that looks to abuse auras and sandbag Arc Light Sentinels late game to kill Chane with his own Blood Debt. A good Chane will be impossible to turtle against, so threatening damage using a single aura and a single herald each turn seems to be the best bet. If you can ever stick 2 auras on the board, you’re in an extraordinarily strong spot and should be in a position to win the game due to the damage you can represent each turn if left unanswered by the Chane player.

If this hasn't dissuaded you yet, then you're probably the right kind of player for Aura Prism!

View the decklist on FABDB here.

Aura control is incredibly strong against decks that look to “go tall”, such as Guardian, Ranger, some builds of Boltyn, and Dorinthea. Unfortunately, in the current metagame which is dominated by Katsu and Chane, the deck struggles to reach its late game plan before dying. While the deck can be piloted to beat both of those decks, it takes some luck on your draws and a lot of matchup experience- making this not the ideal deck to play going into Road to Nationals if you are expecting to see lots of Ninja and Runeblade.

Learning the varied lines, adapting to different draws, and figuring out how to pitch cards while mitigating damage is what makes this deck incredibly difficult to pilot to a high level, as you have no way to threaten significant damage at any point other than late game. That same challenge is what makes it so rewarding to succeed with. 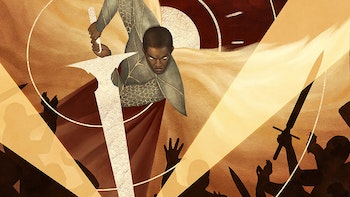 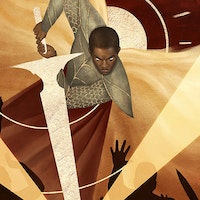 Prism may have been a dominant player in sealed Monarch, but converting that success to the Classic Constructed format has been more challenging than expected. Conor has put in the hours and is ready to share what he's learned to take your Prism game to a competitive level.

Love what you're reading? Why not join the Rathe Times as a subscriber? Subscribers get access to all Pro Series content (currently 65), written by some of the best players and authors this side of Rathe! To subscribe, head to the FaB DB patreon page and select a Supporter+, Majestic+ or Legendary+ tier.

Conor Grant (@Lillith on discord) has been playing since a little before the release of Crucible of War. A university student with a history in competitive Magic, Conor looks to bring a competitive take and a new perspective to everyone's favorite illusionist Prism. He is excited to share his love for everything "Arc Light" with the community, and hopes aspiring Prism players can benefit from his man nights play testing.

Hi, fairly new player here. Just finished reading the article, absolutely loved it. As much as I want to build this, my playgroup is dead set on playing Blitz, unfortunately. Any chance this would still work in the other format?

Burn Them All: An Aggressive Dromai Decklist

Parker Brown has a decklist that pushes Dromai aggressively- but holds a defensive sideboard just in case.

The Illusion Fades: Moving on from Prism, Sculptor of Arc Light

As Prism joins the Living Legends of Classic Constructed, Light Illusionist players will need to decide where to go from here. James Adams examines Prism's central features and draws parallels to other heroes in the game.

FAB101: Dromai and the Illusionist Class

Dromai has completely changed how we approach Illusionists, engaging a whole new subset of players with her dramatic board development.