My name is Alex, and I'm an Azalea addict.

But I'll admit that lately, I've had to question whether my loyalty lies specifically with Azalea, or if it's a general fondness for the Ranger class. Because the past few days have been dominated by Lexi's new Elemental take on the Ranger class, and I'm frickin' stoked. 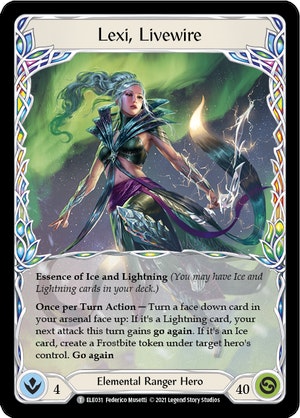 For those who haven't been following the Tales of Aria reveals (spoiler alert: we're going to talk about a few of them below), Lexi is one of three (presumably) new Elemental heroes that will be introduced in Tales of Aria. She has affinity for Ice and Lightning, which thus far seem to represent resource tax and damage multiplying strategies, respectively. She looks exceptionally capable at going wide. And the two bows she uniquely has access to can flexibly add Dominate/Go Again, or give the arrow a simple +1 damage. One of those bows loads twice per turn. Oh, and this time, loading an arrow is an Instant. 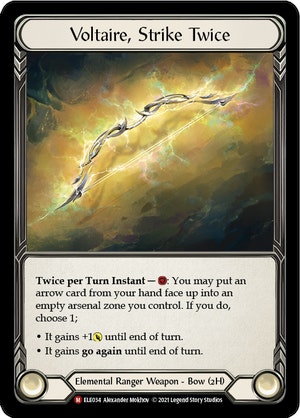 Flesh and Blood's mechanical design binds you to a hero, reinforcing attachment to the character. And while Legend Stories Studio hasn't always taken full advantage of opportunities to endear characters to the players (Freyja had an excellent series of articles discussing missed opportunities to use flavor text on cards to enhance character investment), we've nonetheless developed attachments to our favorite heroes.

So while many Ranger players may have started playing the deck for its mechanics, aesthetics, and the cool factor of bringing a bow to a knife fight, inevitably we expressed this as Azalea fandom. The dark shadow of the Pits became the unsung anti-hero of underdogs and hipsters everywhere.

Looking at how Monarch unfolded, we should have seen this coming. Viserai wasn't exactly left behind with the debut of Chane, but you certainly can't argue he wasn't... eclipsed. (Ba dum * chh! *) And while Dorinthea is as competitive as ever, she received almost nothing in the way of new tools from Monarch.

Azalea doesn't need a couple new tools. She needed an influx. And while it's much too early to tell if she'll get those or not, in the meantime many are watching Lexi excel in areas Azalea's struggled. 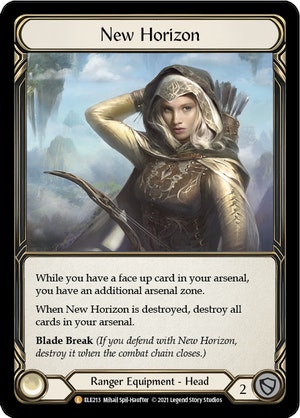 To make matters worse, the Ranger Legendary for the set was revealed, and it competes with the same equipment slot as the last one. This was potentially a major opportunity to up Azalea's game, had the new Equipment been for chest, arms, or legs. But head was the one slot that Azalea was very satisfied with. And now we have the long-awaited '2nd arsenal' ability, and it costs Azalea her Skullbone Crosswrap. This isn't even getting into how, mechanically, New Horizon has counter-synergy with Reload. We only just got this Legendary, and already Lexi can utilize it better- and with less sacrifices- than Azalea.

If you're a Ranger fan, you're looking at all these new Elemental Ranger cards with excitement and anticipation. You're feeling vindicated that the Ranger class is finally gonna flex its control and combo muscles.

And if you're an Azalea fan, you're looking at all these new Elemental Ranger cards with a bit of resentment. You're arguing on the internet about how Azalea still has unique strategies that Lexi can't pursue, and you're gonna show them all with, thus far, what looks to be a few new tools for the same strategies that have failed to produce competitive results.

Most of us are both of these people.

There is hope for Azalea. New Horizon aside, we've had excellent Ranger cards appear without the Elemental tag. Seek and Destroy is a total shutdown card that combos well with Azalea's best arrows and her built-in Dominate. And Bolt'n'Shot is basically a perfect general-use arrow, with built-in Go Again and Reload if you can get a stat buff onto it. Both of these have direct paths into the topdeck Azalea builds that began to develop in the wake of Monarch.

The true threat, however, is not that Azalea won't improve. It's that she will be less desirable when Lexi can use the same card pool (minus Azalea's specializations). Will Azalea's unique elements be enough to hold people's interest? Will she be able to develop a viable strategy based on her access to top-of-deck, deck-stacking, and Red in the Ledger?

Or is the only path forward for Ranger a path that Azalea can't walk?

Leave your thoughts in the comments below!

Autumn Frost: Why I Took Lexi to Nationals

Runeblade may have dominated the US Nationals, but it was Lexi who stole the spotlight when the Top 8 was announced. Isaac Jessen shares with us why an Ice Ranger was the perfect counter to the Briar field.

In this continuation of Taking Aim: How to Win with Azalea, Wesley offers sideboarding and matchup-specific advice for Ranger.