Let’s face it: being a competitive Flesh and Blood player can accurately be described as a grind. If you are a regular reader of the Rathe Times, then it's likely you're competitively-minded too. You may understand where I'm from, then, when I say that it’s refreshing to take a step back from the formats I have been grinding and enjoy the essence of Flesh and Blood.

Let me introduce you to the Commoner format. 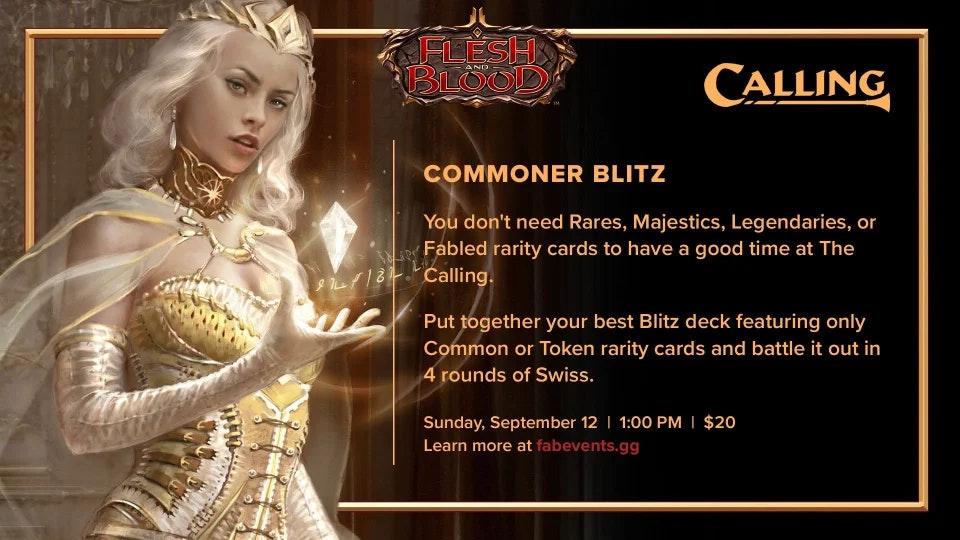 The Commoner format made its debut at the Calling: Las Vegas. Above, you can see the event description provided in advance.

Note: While not explicitly stated, most Commoner events have allowed your Young Hero to be of any rarity, as they are not 'in your deck'.

Perhaps the greatest appeal to Commoner is the ease of deck construction. When your deck consists only of common cards and tokens, it makes the format ridiculously accessible and serves as an excellent introduction to Flesh and Blood for new players. You can grab a pre-constructed blitz deck from the new set, swap out the rares in the deck for some common alternatives, and have a ready-to-go deck that is going to be competitive in the format. No idea where to start, but you have a bunch of bulk? Pick a hero and try your hand at designing the best deck you can with what you already have!

When I was first learning to play Flesh and Blood, I was struck by the fact that commons in this game are a lot more interesting and impactful in this game versus some of its competitors. Even with just common cards, hero and class identities are unique and defined, lending itself to engaging and interactive gameplay.

Without ease of access to life-gain mechanics, blocking efficiently and preserving your life total becomes an important consideration. Even something as simple as deciding when to block with a piece of Ironrot equipment carries greater weight in this format, where it's much harder to prevent on-hit effects.

What struck me most about Commoner is how casual the format is. It's fun to experience all the cool and well-designed cards that wouldn’t make the cut in my competitive deck lists, to try out new things, and to explore different strategies with heroes whose competitive potential has locked them into specific strategies in other formats.

Commoner is a format where I’m not afraid to ‘meme’ and have a good time, trying out ridiculous combos like setting up a massively powerful attack with Kayo for 20 with dominate after throwing all the equipment utility into the attack. (Just hope you roll a five or six on the dice or your attack will crumble right before your eyes!) It’s fun to search for interesting common-only combos, and to discover new ways to build decks under unique design constraints.

A Few Decks to Get You Started

Of course, Ira, Crimson Haze armed with Flying Kick and Torrent of Tempo can feel like a bogeyman in the format. If you want to rock Kodachis and aim for cold efficiency, perhaps Ira is your girl. My Ira list has a hard time losing if you can pull off the combo of Goliath Gauntlet + Kodachi 1 (hit), Push the Point (Red) 7 into Snapdragon Scalers, into Kodachi 1, into Flying Kick (Red) 9. Much like The normal Blitz variant of Ira, this deck wants to maximize value from Kodachis, block efficiently, and get amazing value from 2-card hands.

For players who like to play control, Oldhim can be a fantastic choice to combat the aggressive decks in the format that try to close games quickly, thanks to his hero power and ability to endure. My variant looks to get good value from powerful red fuse attacks, defend efficiently with Fate Foreseen (Red), Sink Below (Red), and Unmovable (Blue), and swing tempo on-demand with Goliath Gauntlet or Earthlore Surge into Thump (Red). If you want to try a more aggressive approach to the new Elemental Guardian, consider playing an earth variant with Anothos.

For players who want to meme, Kayo may be worth it just for the laughs. It’s feast or famine- and mostly famine- with this ridiculous Kayo build designed to reward players with a knack for rolling sixes on their dice. The goal with this deck is to set up a massive attack like Demolition Crew (Red) or Regurgitating Slog (Red) with Goliath Gauntlet and Sloggism (Red), roll a 5-6 on Kayo, and hit for 20 with dominate after you’ve softened your opponent a little bit.

What's Next for Me in Commoner?

If you’re worried I’m going to drop everything and leave my Oldhim CC Pro-Series unfinished... don’t. Commoner isn’t going to replace my love for CC- or even Blitz (which I love for its brevity and instant action). This ‘new’ format certainly won’t become my main format of choice within the game.

But with Kitchen Table TCG running one Commoner event a month, it does give me reason to build a new deck for this format each and every month. Commoner is a refreshing, casual outlet to explore the game, take a break from the grind, and introduce new players to just a small sliver of everything Flesh and Blood has to offer without the barriers to entry or financial hit.

Have you tried Commoner? What are some of your favorite heroes to play? Join the conversation and let me know in the comments below!

Drew Cordell has been casually competing at high levels of Magic: the Gathering for over a decade before discovering Flesh and Blood and playing obsessively. Drew is also an Amazon-Bestselling science fiction and LitRPG author and maintains a top 10 writer status in Games & Gaming on Medium.

Gaining momentum is key to winning any card game. Davis talks about three ways to use cards to gain an edge on your opponent.

There are many ways to manage a team that can regularly place in the top 10% at tournaments. Here, Mark shares his experience of team management- practical tips for maintaining cohesion, improving your skills, and getting results!

Lightning in a Bottle: The Case for Synergy

Frank Hung makes his debut with a close examination of synergy and its importance in deck building.