While the new Shadow Runeblade is making his presence felt across both the Blitz and Classic Constructed metagames, he's not the only Runeblade bringing some new tricks to the table. Viserai has undergone some changes of his own, aided by a few powerful new cards from Monarch. These new additions have further defined Viserai as a multifaceted threat, particularly in the Blitz format. Gone are the days of relying solely upon Sloggism-empowered Arknight Ascendancies to steal initiative and gain tempo. Viserai has learned to sing a new song...

Sonata Arcanix is easily the Monarch card with the greatest impact on the original Runeblade hero. It gives Viserai another high-impact card on a power level similar to Arknight Ascendancy, Rattle Bones, and Mordred Tide. Having played midrange Viserai throughout all of the first Skirmish season, I can confidently say that consistency was the biggest issue for the deck. For that reason alone, Sonata is a game changer. It lets us play a slightly slower setup game with a big payoff that can put opponents completely on their back foot- if not kill them outright.

Sonata Arcanix is easily the Monarch card with the greatest impact on the original Runeblade hero.

In addition to the increase in consistency, Sonata allows us to threaten a singular source of big arcane damage. Opponents still stop at Arcane Barrier 1 against Viserai, which means that any amount higher than that is effectively unblockable. This is invaluable for ensuring arcane damage connects on our big Sonata turns, as well as giving the deck extra reach to close out games.

As is common for top-tier Runeblade cards, Sonata works extraordinarily well with Bloodsheath Skelata. Previously, the ceiling on the maximum resource value you could get from Skelata was 6 resources (a free Sloggism and half an Arknight Ascendancy); but with Sonata, that limit skyrockets. In an ideal game where things are going according to plan, we'd break Skelata with 12-14 Runechants in play, which would let us reveal 9-10 cards from our deck (assuming we don't pitch for any additional resources). In a deck that is half attacks and half non-attack actions, we will pretty frequently be drawing 4 or more cards from this big Sonata turn. I have dealt as much as 38 points of damage in a Sonata turn, all but killing them on the spot.

Disclaimer: Sonata Arcanix is not for the faint of heart. At its best, it can be one of the most egregiously powerful cards in Flesh and Blood. But even with a deck built to maximize it, Sonata can use up a ton of resources and potentially give you literally nothing in return. In one game during a Skirmish event, I broke my Skelata, pitched two cards, played Sonata for X=5, and revealed 8 attack actions. Variance can be a cruel, cruel mistress. 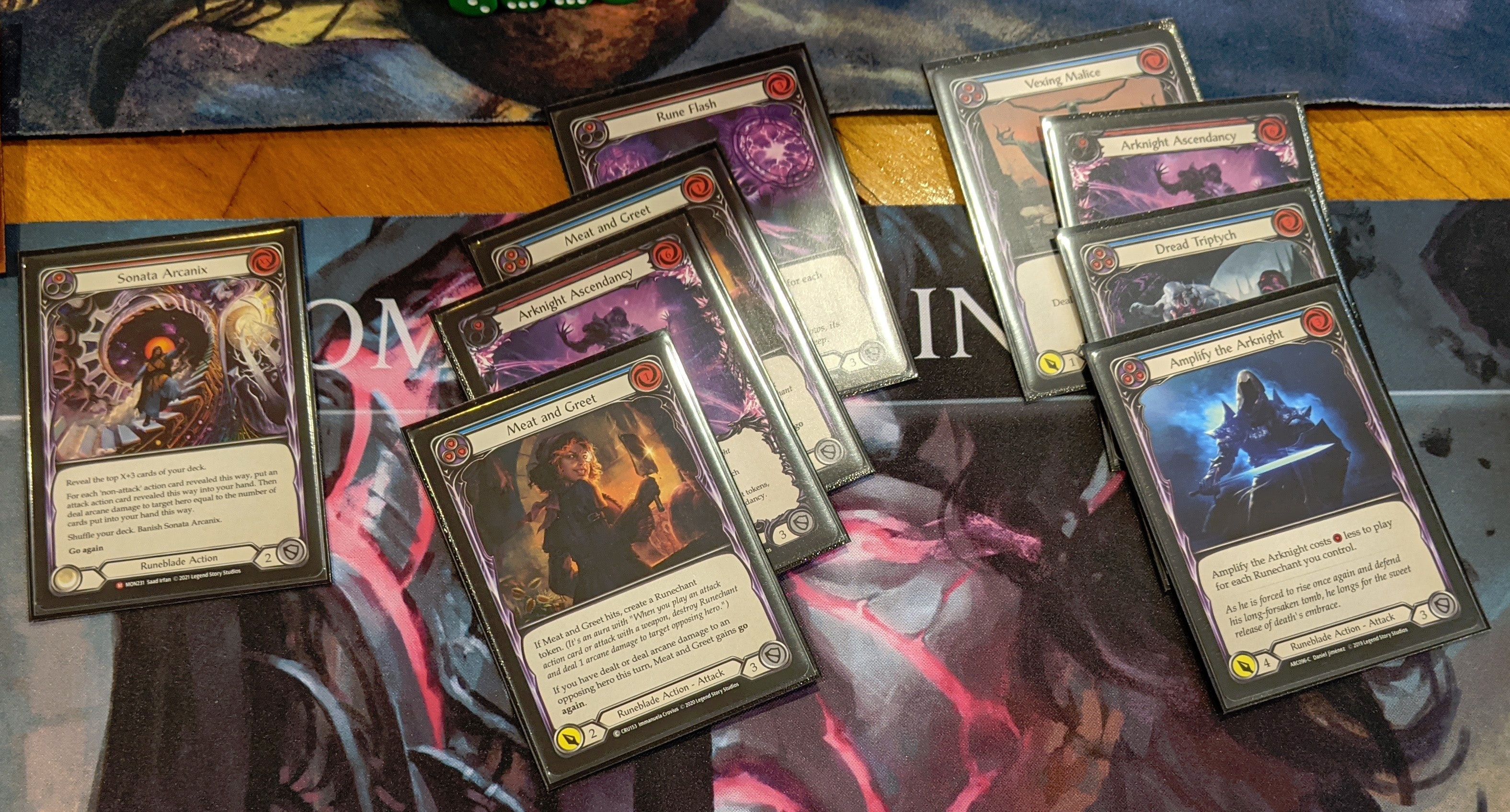 When initially testing out the card, I started by replacing all the defense reactions and running exclusively actions and attack actions- but it quickly became apparent that fully utilizing Sonata would require more substantial changes to the deck.

After moving to a 20/20 split of attacks and non-attacks, the next obvious change was to increase the density of blue attack actions in our deck. Since Sonata only puts attack actions into our hand, having high pitch values on as many attacks as we can makes it so we can usually afford anything we want to do after playing Sonata.

On our Skelata+Sonata turns, assuming we don't get rather unlucky, we can generally assume that we'll deal some arcane damage. This means the bonus effects of cards like Rattle Bones and Meat and Greet will be active, which is important since after a big Sonata we are more likely to be limited by action points than by resources. We also play Time Skippers for this reason.

While the most obvious thing that determines whether it's time to go off is your Runechant count, the next biggest factor is what non-attack actions you have available to you. Sonata Arcanix is obviously necessary, but Become the Arknight, Rattle Bones, Mordred Tide, and even Tome of Fyendal can take the Sonata turns to the next level. The more of these you have on your big Sonata turn, the better. Sonata turns can vary so widely that I could spend an entire article just covering the best combinations- but I can tell you that you will want to get a good number of reps in with this deck before taking it to a real event.

Become the Arknight has gotten quite a bit better with the addition of Sonata Arcanix. Since Sonata only grabs attack actions, having a Become the Arknight on hand to turn any of those attacks into any non-attack action (usually Rattle Bones or Mordred Tide) can turn an already powerful turn into a One Turn Kill. Aside from that, it can also grab a Read the Runes if we're still in early game setup mode- or a Sonata if we're done setting up and ready to go off!

Blue Vexing Malice is a great role player for this deck. It pitches for 3, blocks for 3, and aside from Sonata Arcanix, it's the only other way Viserai has to deal more than a single point of arcane damage from one source, which makes it great for closing out games. If you're just looking to deal the final point of damage to your opponent, it's a 1-cost attack that requires at least an effective two card block to stop. It's particularly great late game in conjunction with Mauvrion Skies.

Ninth Blade had previously been relegated to that OTK Viserai deck filled with defense reactions that just tried to stall until it could guarantee a kill- but no more! This midrange build has more focus on building up Runechants, but it also runs substantially more blues, which make it far more reasonable to play at cost. Feel free to block with these early, as you can always Rattle Bones it back on our big Sonata turn. Oh, and bonus points for popping Prism's Phantasms!

Time Skippers are a fantastic payoff for our Sonata turns. Given the density of blue attack actions in our deck, the cost different between these and Mage Master Boots is well worth the flexibility. Drawing a bunch of cards off of Sonata, breaking these boots, and swinging with a Ninth Blade of the Blood Oath represents well over 20 damage, and that's often just the start of our attacks!

The release of Monarch has given this aggressive card from Crucible of War a new lease on life. Similar to Time Skippers, Meat and Greet is great for the guaranteed go again we get on our Sonata turns, allowing us to attack wide after starting off tall.

Other Cards for Consideration

Reduce to Runechant would be an auto-include if it didn't reduce the consistency of our Sonatas by being a defense reaction. Art of War is in the same boat, as it gives us everything we want in a card aside from being an instant. These two top my list of things to experiment with going forward.

Since Sonata makes us shuffle, we'd just be playing the odds with our deck split of attacks and non-attacks. Research Notes and Whisper become better options if we try to make Tome work, but I consider these an all-or-nothing package that I haven't felt was necessary.

View this deck on FABDB here.

Gambler's Gloves as needed against Kayo

Viserai continues to impress me with his overall power level, and remains my primary competitive deck of choice for the Blitz format. With some smart play and a blood offering to Ursur to avoid the worst of variance, midrange Viserai with Sonata Arcanix can be a nearly unstoppable force. If you enjoy playing something a bit different that can still have you hanging at the top tables, give this Sonata Viserai build a try!

Kevin Brayer (@Hannibal in Discord circles) is an author for the Rathe Times and has been playing Flesh and Blood since the release of Crucible of War. A Software Developer living in the US, he is a competitive player with a background in MTG. He loves putting time into mastering archetypes and is looking to make his mark by bringing everyone's favorite Arknight into the competitive scene. Kevin is excited to give back to the community by sharing his insight, humor, and love of all things Demonastery.

Great article, thank you! I saw the Katsu tech in the recent CC charity tournament, running red Belittles and blue Minnowisms as a little package. I've been thinking, should this package be incorporated into Sonata builds as well? You can still balance your card type count while increasing your Go Again density and tutoring blue pitch cards! It seems legit, and I was wondering if you had tried it.

I've actually built my Viserai around Minnowism/Belittle, but I don't use Sonata. I'm interested to hear if Kevin (or anyone) has crossed those 2 concepts over.

Do you think Shard is worse enough with Sonata to exclude it?

@Josh @Alex I have not tried that but it's definitely an intriguing idea! It would definitely require some other changes to increase our 3 or less attack density, but there is probably a version of this deck that could be built to go wider rather than initially tall with Ninth Blade. The one potential issue I can see is that more generic attacks means less Runechant generating attacks, which runs counter to the plan of building up for the big Skeleta+Sonata turn. @mistahark I LOVE shard, but it not blocking in Blitz is just too punishing. It's the same reason why Gorganian Tome didn't make the cut. Both have a home in CC Viserai, alongside Sonata. (though I think the Skeleta+Sonata focused build is worse in CC than in Blitz)

The Next Link: Moving on from Chane

Chane attains Living Legend status in Classic Constructed! So what do you turn to now?

FAB101: Briar and the Runeblade Class

Balanced between offense & defense, between magic & might, Briar bridges the gap between humanity and nature.

FAB101: Chane and the Runeblade Class

Chane's access to banished power pushed him to the forefront of competitive play, earning him the title of Living Legend. Learn how to harness the power of the shadows.