So, about ten months ago I wrote a piece about the then-relatively new playmat secondary market. At the time, I was skeptical of the sky-high prices some rare mats were going for (over $1000), and advised caution for anyone who was eyeing them up as an investment. Now, with many, many, more mats released through a whole panoply of different promotions, events, and prizes, I’m returning to the subject to look at what has changed and where I see the market today and going forward. Remember, for our purposes, we’re talking about these specifically as a place to park money. If you just want a playmat for personal use and you have no plans to ever sell it, then you can just buy them for whatever you feel comfortable paying.

Fall of the Mighty

For mats, one of the most striking market shifts over the past year has been the decline of what I’d consider the hallmark of iconic and rare mats that you can actually find for sale: the Spring Tunic mat. These days, it’s much closer to what it was selling for before the game took off (about $100-150) as opposed to its peak of over $600. This is largely due to LSS’s choice to continue handing them out as organized play prizes, which has brought their prices down to $200 or less. Meanwhile, more recent mats that have debuted at high prices have subsequently dropped on a much more rapid timeline. 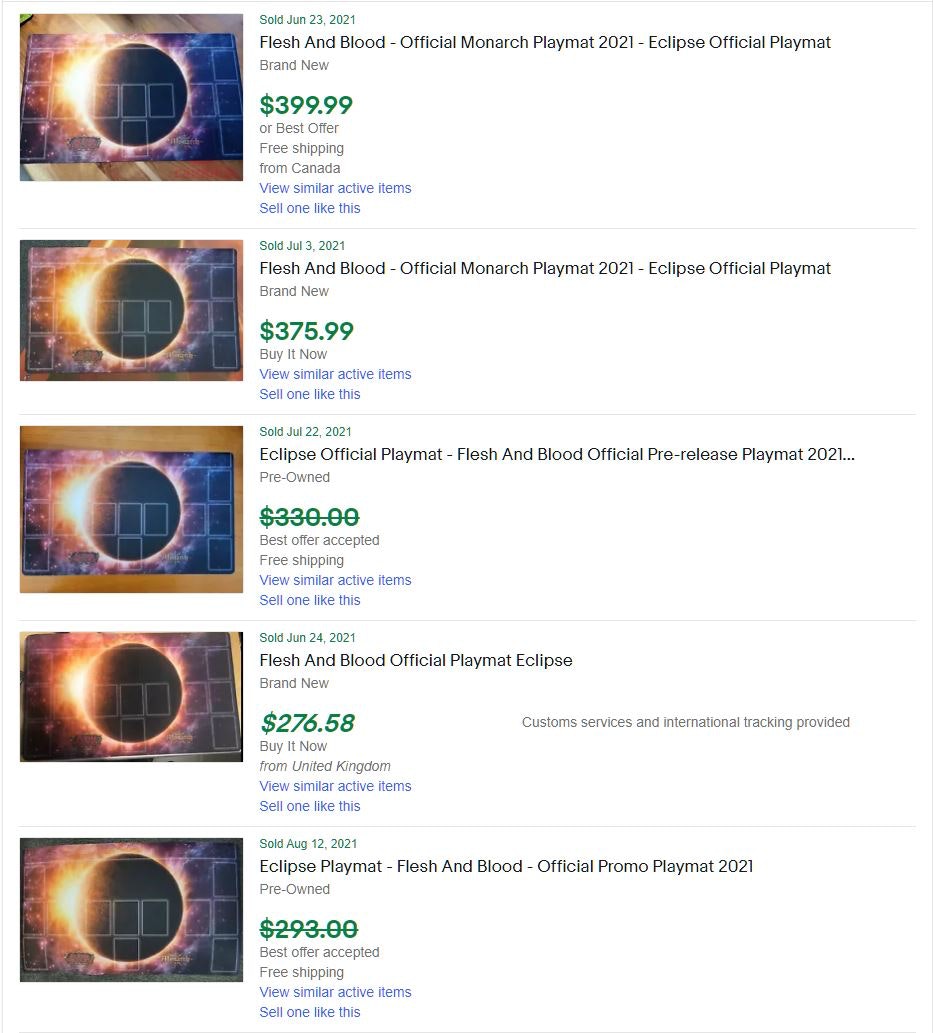 You can see sales of Eclipse mats on ebay steadily decline from the opening high of $400 to the most recent one selling a month and a half later for a best offer of $255. Exude Confidence mats were selling at $200+ prior to being handed out at The Las Vegas Calling and are now fairly easy to find for $75 or less on Facebook and Discord, where many Calling attendees are dumping theirs to recoup travel costs.

In short, we’re seeing similar behavior with mats to the recent shift in the cold foil market post-Monarch: they debut high, the market adjusts, and their values erode significantly from the first sale price. What’s notable about the mats is that there isn’t usually the same guarantee of exclusivity as there is with cold foils, not to mention I’ve seen far more counterfeit mats than counterfeit cold foils on the market.

It was only a matter of time, but as the amount of different mats hitting the market is much higher than it was this time last year, we’re starting to see a flooded marketplace. We’re also seeing new channels for mats to enter the market from. For instance, there are now multiple Tales of Aria mats available via pre-order from different retail partners. Official mats are also now competing for attention with the ones the community is producing. There are multiple stores and content creators regularly making their own mats, usually with FAB-inspired artwork, which are going up for sale often well below the secondary market prices for official mats, and a cottage industry of artisans making high quality bespoke mats has even sprung up to cater to those with money to burn.

In short, if you want a mat, there are a ton of options available, and outside of exceptionally rare mats, the prices are coming down a bit across the board. A year ago, you’d be lucky to find any FAB mat for under $50, and ones with card art tended to start at $75. Now there are an increasing amount of art mats at $50 or less, and I see no reason to assume that these prices won’t continue to fall- especially when it seems that LSS is finally ready to put out mats for general sale. Miniatures Market currently has the classic brown playmat listed for pre-order at $17, discounted from a $20 MSRP (Miniatures Market has responded to inquiries about availability with a tentative date of December 15th). If LSS starts selling mats with actual art, even if they’re marked slightly higher than the brown ones, say $25, how much longer can random Armory and event mats command their current prices?

With all of that laid out, I do want to acknowledge that there is a niche market of mat collectors who are willing to pay large sums for rare mats and/or try to collect as many new mats as they can. So, should you find yourself in possession of an exceptionally scarce playmat, there is potentially someone out there who will pay a lot for it. However, finding that person can be fairly challenging for people who aren’t already connected to the scene. This is another reason why mats are a tricky item from an investment perspective, high end ones tend to have an especially narrow audience when compared to something like cold foils.

Where Do We Go From Here?

From here on out, I expect to see the average value of Flesh and Blood playmats decrease. I wouldn’t be at all surprised if, a year from now, most Armory and event attendance mats are selling at $20-40, and mats that would be commanding $150-250 now (top 8 mats from Road to Nationals, for instance) are selling for $100 or less. The very rarest mats may still hold exceptional prices- if Worlds has a unique Top 8 mat, for instance, I would assume those will sell for over $500. But the average player will be able to walk into a store or go to a big online retailer and buy an official mat for $15-25 dollars, and that is going to cut the legs out from under the more common mats. Thus, my advice now is the same as it was last year: for serious mat collectors, you know your business. For everyone else, if you want a mat to use, find one you like at a price you’re OK with paying and do so under the assumption that it may have negligible value if you choose to sell it later.

Honestly, as sometime with a decent collection of mats, I can only see this as a good thing. On the one hand, I lived being able to get a playmat and seek it, funding more if my hobby. Every time, though, it was a bit of heartache-- they're all so pretty, and usually meaningful. Sometimes they mark milestones of progress, or moments of recognition from a community of friends. It was nice that they hold/held a monetary value, but that almost sullied the whole prospect. I was so happy to receive the community champion playmat of wartune herald, and even happier to give it to a friend who plays prism-- far happier than $100 would have made me. But that's just my take!

Honestly, as sometime with a decent collection of mats, I can only see this as a good thing. On the one hand, I liked being able to get a playmat and sell it, thus funding more of my hobby. Every time, though, it was a bit of heartache-- they're all so pretty, and usually meaningful. Sometimes they mark milestones of progress, or moments of recognition from a community of friends. It was nice that they hold/held a monetary value, but that almost sullied the whole prospect. I was so happy to receive the community champion playmat of wartune herald, and even happier to give it to a friend who plays prism-- far happier than $100 would have made me. But that's just my take!

I really love the fact that LSS gives out mats as a reward. I don't think mats being high priced is something healthy for the game, but ~100-150 seems reasonable; especially when you can make your own for free with the art assets provided by LSS.

LSS actually doesn't want you using their art on playmats.

You can't legally use your own mat with thier art... trust me i found this out the hard way. Made my own custom mat when i first started playing with the bloodrush bellows art work.

State of the Market: Uprising's Release

In the first of three installments, Ada examines the Uprising market shortly after release.