A few weeks back, I was asked if I wanted to do mid-month pieces that are a bit shorter than my State of the Market articles. Since most of my content here and on my personal site is relatively long, this seemed like a good opportunity to talk about things that don’t really have enough substance to yield a full length piece.

In that spirit, we’re going to kick things off with something I’ve really wanted to talk about for a while but haven’t been able to find a good time to do so: first printing foil variants. While there are certainly some people who know about these, I would say that the majority of the community really isn’t aware of them- which means that, aside from just being cool artifacts, there is financial upside to them if/when more people start to realize that they exist.

What Are Variant Foils?

Legend Story Studios has an Ed Boon-level love of hiding Easter eggs throughout the game. Many of these elements appear as unique changes to cards that only appear on first edition foils. There are a range of forms that these variants take that span art, rules text, and flavor text. Some of them are big and flashy, while others are more subtle. Let’s look at some quick examples:

Razor Reflex has a blood splatter on the sword that only appears on the alpha edition foil. This is a cool little detail that, while subtle, marks the first printing as special. I want to emphasize the difference between this and the recent Blood Tribute variant we saw between Monarch first edition and unlimited. 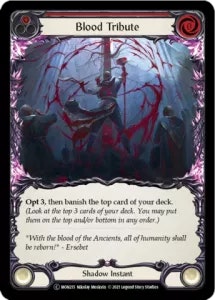 The Blood Tribute variant art is obviously much more substantial (it’s the entire art), but the non-foil first edition version has the same art as the foil version, whereas Razor Reflex only has the special variant on the alpha foils, which means that there’s a much smaller pool of cards with this variation out there. Essentially, if you want the variant, your only option is an alpha foil.

We can see a flavor text difference on Come to Fight. All the unlimited versions and the non-foil first edition version have the first stanza of a poem. Meanwhile, the first edition foil has the second stanza.

Finally, there are my personal favorites, the first printing foils that remove the reminder text. These occur across classes, but I think the absolute standouts are the Boost cards for Mechanologist, such as Zero to Sixty.

The visual difference between these two is really striking, with the single word foils being particularly elegant.

As noted, LSS likes to pack a ton of secrets into their cards, so there will likely be other variants that show up in the future, but this hopefully gives you an idea of some of what is out there. These variants usually show up in the Collector’s Centre (https://fabtcg.com/collectors-centre/) notes, if you’d like to take a look at what other cards have them.

Variants as an Investment

Right now, I think that these variants are an underappreciated element of the game and the market is not properly valuing them. As I said at the outset, I think that most players simply don’t know that they exist; and when there's greater awareness of them, they could easily shoot up.

A good analogy is the Team Covenant Scar for a Scar promo. Most people didn’t really know it existed, and they were available for $20-40. Then they showed up on last year’s Flesh and Blood anniversary stream, and suddenly many more people realized that they were a thing, which shot their price up to $300+. Right now, most of the variant first printing foils cost about as much as any other first print foil of equal rarity and frequency of use. But as the community grows more aware of them, that could easily change.

Unlike known chase cards, these cards are still relatively cheap, and thus much more accessible to people who don’t specialize in the high end. The key is identifying the “good” ones. What makes a good variant? For my money, the most important factors are playability of the card itself and how significant the difference is. So, for example, Come to Fight is not one I’d seek out because it isn’t seeing a ton of play, nor is the difference that apparent at a glance. Meanwhile, the Boost cards have a pretty dramatic visual difference, and a lot of them are frequently played (Dash may not be a tier one deck at the moment, but they’re central enough to the class identity that, if she or a different Mechanologist make it to tier one in the future, some of these cards will probably be involved). While the visual impact isn’t quite as significant as the Boost cards, Mauvrion Skies also has first edition foils with no reminder text, and that card is absolutely on fire at the moment.

One thing to keep in mind with variant foils is that LSS hasn’t made any statements, at least to my knowledge, on these being exclusive forever- but it’s reasonable to assume that that is the case until we see evidence to the contrary. As the game continues to grow and people are playing in person more, I think we’ll see a steady increase in the total number of players who are in the market for blinged out versions of cards, and these players will exist across a wide range of budgets. While a lot of people won’t realistically be able to afford the thousands of dollars a cold foil Tunic costs compared to its rainbow foil counterpart, there is a much larger group who could afford a $9 1st edition rainbow foil Zero to Sixty over a $1 unlimited edition copy, and that $8 gap could increase significantly before it really started pricing those people out.

I've opened tons of monarch first edition and unlimited. I too noticed the difference between ul and 1st edition blood tribute. You have an eye for spotting underappreciated trends. I've been buying alpha wtr cards enmass at every opportunity. The market is undervalued these cards currently, in my view of course. Within the last couple months I've scooped up every single alpha I could find that was selling for pennies on the dollar. I probably single handedly boosted the entire alpha market on tcgplayer by removing all the cheapies.

State of the Market: Uprising's Release

In the first of three installments, Ada examines the Uprising market shortly after release.