Figuring out Data Doll MKII has been my mission for as long as she’s been out. Countless hours of working on her has brought me to this list, which has an astounding win rate from testing. This article is here to help you pilot it – and its endless ways to play out a turn. Here are some old tricks and new Dynasty essentials that will be relevant when chasing Data Doll’s first living legend points.

Today's article builds upon foundational understanding of Data Doll decks and objectives that can be found in prior Rathe Times articles: 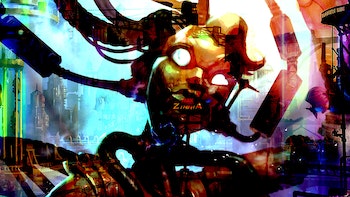 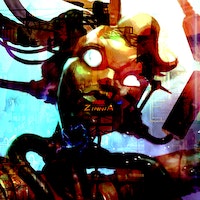 At the core of Metrix is the beeping heart of Data Doll. She is the eyes and ears of Metrix’s esteemed scientists. But can this experimental hero take a place among the champions of Rathe? Or is she forever a science fair project? 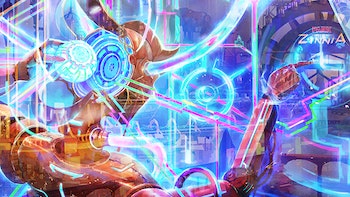 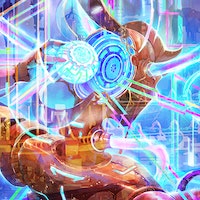 The EVR update for Data Doll MK II did more than just add a Micro-Processor. If you haven't taken a look at the latest model, it's time you refreshed.

With Data Doll, you’re gonna boost to set up, not to deal damage. Most opponents will feel very comfortable when seeing Data Doll as their opponent. And they’ll keep feeling confident for a couple of turns. As her intellect suggests, she’s slow, and she needs time to set up.

The first turns are about establishing items like Dissipation Shield, Absorption Dome, Plasma Mainline, and Optekal Monocle. Every item is important, but Blitz is fast and you must prioritize. Say you’re on turn two. You have one action point left, a Micro-Processor that’s already been used once to mulligan a card, and an Optekal Monocle with 5 counters. I'd skip that Plasma Purifier and keep digging with Optekal Monocle until I find that defensive item. Then end my turn with a “banish top card”-activation with Micro-Processor. Later on, banish whatever you find. The healthier you are when your Pistol goes off, the higher the reward.

How do you prioritize? Let's dig into the items and the strategies surrounding them.

Blocking from Hand is Outdated

It’s no secret that three intellect is a massive drawback - especially on the defensive side. This is, however, where the new and upgraded Data Doll shines. I’ve always brought Dissipation Shield in every iteration of the deck. Banishing it gives you essential breathing room with a “free 4-block” that can be activated at instant speed on your opponent’s (and your own) turn. Those 4 points of damage prevented - combined with a block-two equipment - is usually enough to keep you nice and healthy.

Note: You should rarely activate Dissipation Shield against vanilla damage. Use it to prevent something disruptive and significant!

Blocking from hand is a rare occasion. Especially for this deck. It’s something for when your opponent opens with a huge first turn, and for the game's closing turns. Everything in between is about maximizing the number of cards that end up in your banished zone by boosting, banishing top deck with Micro Processor, and activating Teklo Foundry Heart. As soon as Optekal Monocle hits the arena, however, you can feel good about adding an additional 3-block from hand, as you’ll have full control of which items end up banished - and subsequently in the arena.

Dissipation Shield's value peaks against classes like Wizards, since it also prevents arcane damage. Against Guardians and Brutes who goes tall with either dominate or intimidate, it helps you avoid devastating crush effects and keeps you from dying on turn two. Warriors, with their powerful attack reactions, can be countered with an instant speed activation (that, notably, doesn’t trigger reprise).

Dissipation Shield is Data Dolls most important card. And it just got stronger with some new toys from Dynasty.

The combination of these two items will have an immense impact on your defensive capabilities, especially in Ninja and Runeblade matchups. Ninjas will have both Phoenix Flames and/or Crouching Tigers that’ll keep the threat of Mask triggers coming. Runeblades present awkward numbers like four damage attacks that can be completely blocked out with a single steam counter from Absorption Dome and one card from hand, or two counters and an equipment block.

Plasma Mainline is an absolute revolution for Data Doll.

What Plasma Mainline essentially does is:

During testing, Plasma Mainline proved to be an absolute revolution for Data Doll. When Optakle Monocle reveals Induction Chambers or Plasma Purifiers while Plasma Mainline is in the arena, it’s essentially revealing your next three to four damage. While two Plasma Mainlines are in play, you can also double load these items, meaning you will also have a free activation ready for your next turn as well.

We (meaning the lunatics that are still on Data Doll) got some awesome cards for our hand expansion slot: Jump Start, Pulsewave Harpoon, and Urgent Delivery.

Hyper Driver is a Data Doll staple that’ll always find its way into my lists. Jump Start synergizes perfectly with Hyper Driver and with my personal preference of avoiding two-cost cards. When a Hyper Driver is in play, Jump Start costs one, attacks for five, and can be boosted. It's *chefs kiss*.

Pulsewave Harpoon basically forces your opponent to block on chain link three and gives you the opportunity to remove huge threats from their upcoming turn. This also makes the intellect difference in every single matchup feel less significant.

Red Urgent Delivery is Pour the Mold with four damage! A great way to end you turn. We’re only bringing one of these, since they can’t be boosted.

There’s a forgotten synergy between Optekal Monocle and Micro-Processor. A lot of players opt or draw cards with the specialization at the start of their turn, even though they have three attack action cards on hand. But the specialization is not a start-of-turn activation, and could help you get amazing value at the end of your turn. Optekal Monocle basically guarantees it. Add High Octane to the mix, and you’ll be able to activate Micro Processor an additional time for each boost throughout the turn.

Note: The actions on Micro Processor are “Once per turn actions”, so make sure you save those "banish top card" activations for those spare action points at the end of your turn.

I cannot emphasize enough how important the defensive items are. Setting them up at the end of your turn is always better than that last “pew pew for two”, unless it’s lethal. If your opponent isn’t blocking, chances are something big is coming. In this case, a block two item far outweighs a pistol attack that could stay loaded and ready to go for your next action phase. Using the combo above to work defensive items into play is the best way to keep yourself in a good place going forward.

You lose the opening die roll, and your opponent chooses to go first. There are three items with zero block in your hand. Yikes.

This will happen from time to time, and is why my list includes Ironhide equipment - always Gauntlet, and sometimes Legs. While Achilles Accelerators are the go-to footwear for any Mechanologist, in testing I've found that the Ironhide Legs provide some much-needed value in certain matchups. Against Benji and Bravo, yellow items with zero block can pay for four defense and avoid crush effects or mask triggers. A secondary effect is the ability to mulligan said items – and if you’re stuck with three items on hand, pitching a red item to each Ironhide equipment lets you get rid of two.

Going in for the Kill

We’ve talked a lot about the new defensive capabilities that helps you set up for late game, but what does a winning position look like for Data Doll? At some point - usually when both Induction Chambers and one or two Plasma Purifiers are in play - you've got to switch up your strategy.

Stop boosting to set up and start boosting to go wider. This means your blues become pitch cards that pay to charge Induction Chamber, Plasma Purifier, and the Pistol, and now you're attacking with your reds.

You want to get rid of those reds as soon as your gameplan of setting up items around Teklo Plasma Pistol is achieved. Play the reds without breaking the combat chain. Usually, this means playing an attack action card after your second-to-last pistol shot, before you reload your items for the last time that turn. If there are only blues left in your deck, you’ll attack for 12 every turn. That’s bound to make your opponent leak damage or eventually become fatigued.

Data Doll is one of very few heroes that can fatigue themselves.

A winning hand would be something along the lines of two blues and a red boost attack action in hand, plus a red attack action in your arsenal. At this point in the game, don’t use Teklo Foundry Heart unless it provides a resource that helps you go in for an additional attack. Data Doll is one of very few heroes that can fatigue themselves, which is the classic rookie mistake.

Remember to charge your items up with any spare resources before firing your last shot. You won’t have an action point without go again from Induction Chamber, and the last thing you want is wasting resources that could’ve been spent to set up your next turn.

You’ll have access to even more items from Dynasty. Sadly, they’re not the big hits we wanted. Powder Keg presents a huge threat combined with T-Bone, but it doesn’t work with pistol, and “Gun Data Doll” just doesn’t win. Trust me. Hyper Driver comes in different colors now, but we’re sticking with reds.

Other cards that didn’t make it: Scramble Pulse and Crankshaft. They’re two-costs. Crankshaft looks great for CC Dash, but we won’t reach the point where this card's banish effect matters in Blitz. The Hyper Drivers have already done what they need to do when leaving the arena, and we’re probably pitching blues to attack for 12 every turn.

Scramble Pulse is a card that will surprise a lot of people by forcing blocking equipment with temper to suddenly get destroyed as they leave the combat chain. Again, I think Scramble Pulse will be a great addition to any boost Dash deck, but the cost of attacking is just too expensive for Data Doll.

In my experience, Rhinar is the toughest matchup. Intimidating three cards isn’t hard for Rhinar, so I’m considering running Helio’s Mitre in this matchup. The theory is that you’ll pitch a blue to Helios, leaving one resource floating for Ironhide Gauntlet.

Data Doll is an incredibly rewarding hero to play, and with Dynasty's release, she's finally coming into her power. This list should feel comfortable for anyone who's dabbled in Data Doll builds of the past, and my testing has shown it works.

For the more experimental among you, watch the Rathe Times in the coming weeks for an in-depth exploration of the Nitro Mechanoid and its potential to introduce a whole new archetype for Data Doll.

Stian Taknes Eriksen is a Norwegian mech-head determined to make Data Doll a living legend. It's difficult to determine whether it's an insult or a compliment when he calls people "nerds". You'll find him on Twitter under @faberiksen.

When considering picking up a new deck, it's worth asking a few questions. "Are the Legendaries important?“ "How cheap is it to build this hero?“ "Is the deck viable on a budget?“ Our Budget Builds series aims to put you on a competitive playing field without a big financial investment.

With a recent showcase at The Calling: Singapore, the hybrid Mechanologist engine is ready for action.

Dash has the capability to respond to any matchup, if you know how to.