My name is Alex Truell. I'm the editor for the Rathe Times. I'm a casually competitive player overseeing the growth of a Flesh and Blood scene at Alexandria Games in Ripon, WI.

Thoughts and Baubles is an editorial space for the Rathe Times, where I discuss the game and respond to the community. However, the biggest thing happening in the FaB community this month is The Calling: Las Vegas, an event I was unfortunately unable to attend.

Luckily, our very own Voice of the Rathe Times, Mark Chamberlain, was there in person. I've asked him to take the bulk of this month's Thoughts and Baubles to report on that experience. I'll see you again at the close of the editorial. -Alex

The Calling at Las Vegas was not only the first Calling in North America- the culmination of a month of Road to Nationals events and the long-awaited final showdown against the format leader, Chane- it also marked the world premiere of Tales of Aria. 877 people participated in this pre- prerelease, where the first Korshem, Crossroad of Elements was pulled- and I was among the fortunate!

But if you're plugged into the FaB community, you've heard the big stories already. What was it like on the ground? 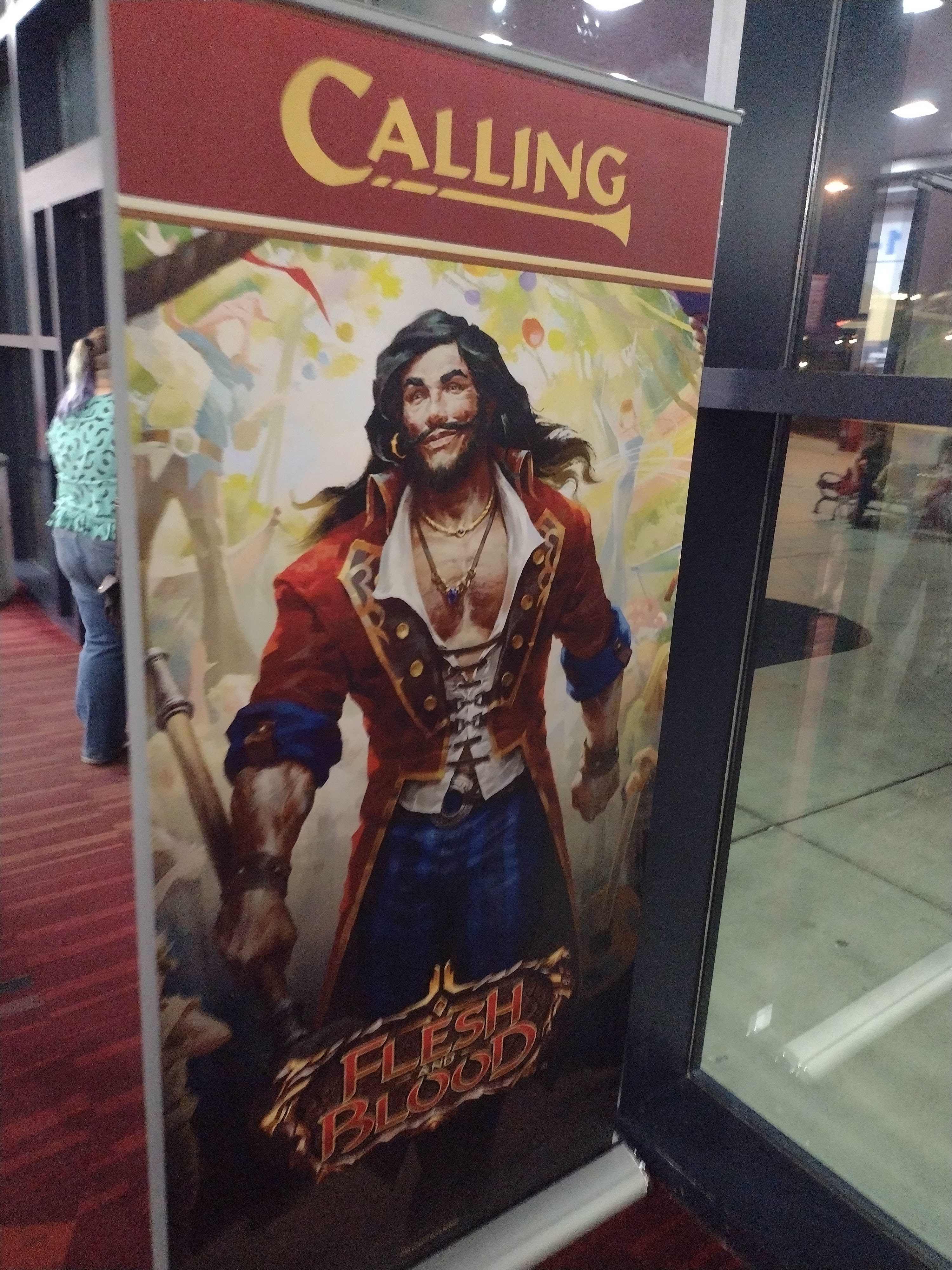 Although much of my time was already claimed by the two main headlines of the weekend- the World Premiere and the Calling tournament proper- I did try to get the full convention experience while I was there.

Arriving at the Las Vegas Convention Center, I was greeted by many colorful banners featuring characters and locations from the world of Rathe. Safe inside from the desert heat, the atmosphere was cool, calm, and relaxed- but with an undertone of excitement that grew as you drew closer to the precise location where events were being prepared. It was a thing of beauty: so many Flesh and Blood players, all coming together to play 100% great games, just as Legend Story Studios had always intended it.

The event center itself was spacious, yet perfectly sized. It wasn't as snug as a KMC perfect fit, nor was it as roomy as a penny sleeve. There was hardly ever gridlock- except for at the swag booth, where a small handful of event staff were tasked with processing and passing out mats and deckboxes to everyone who had registered for such. The biggest reason for the backlog was that nothing was posted saying you could stop for your swag anytime, and as such, the hourlong wait was the very first thing you saw when entering the actual events space.

Channel Fireball was running their prize wall, with packs from all eras of the game. Beyond them, there were several vendors on site that had come from near and far to sell boxes and singles. Each of the vendor's tables was well stocked and crowded, but I never waited long to speak with any of the dealers. Everyone I spoke with reported that it had been a great weekend for them too.

Alpha packs were on site, for purchase and prizing (which led to one of the oddest stories of the weekend, when a player went Flip It or Rip It and chose wrong on a pack of First Edition Arcane Rising; the peeling cry that he let out echoed in the hall, its rumblings still heard today in the whispered fascinations of those who would never do such a thing). 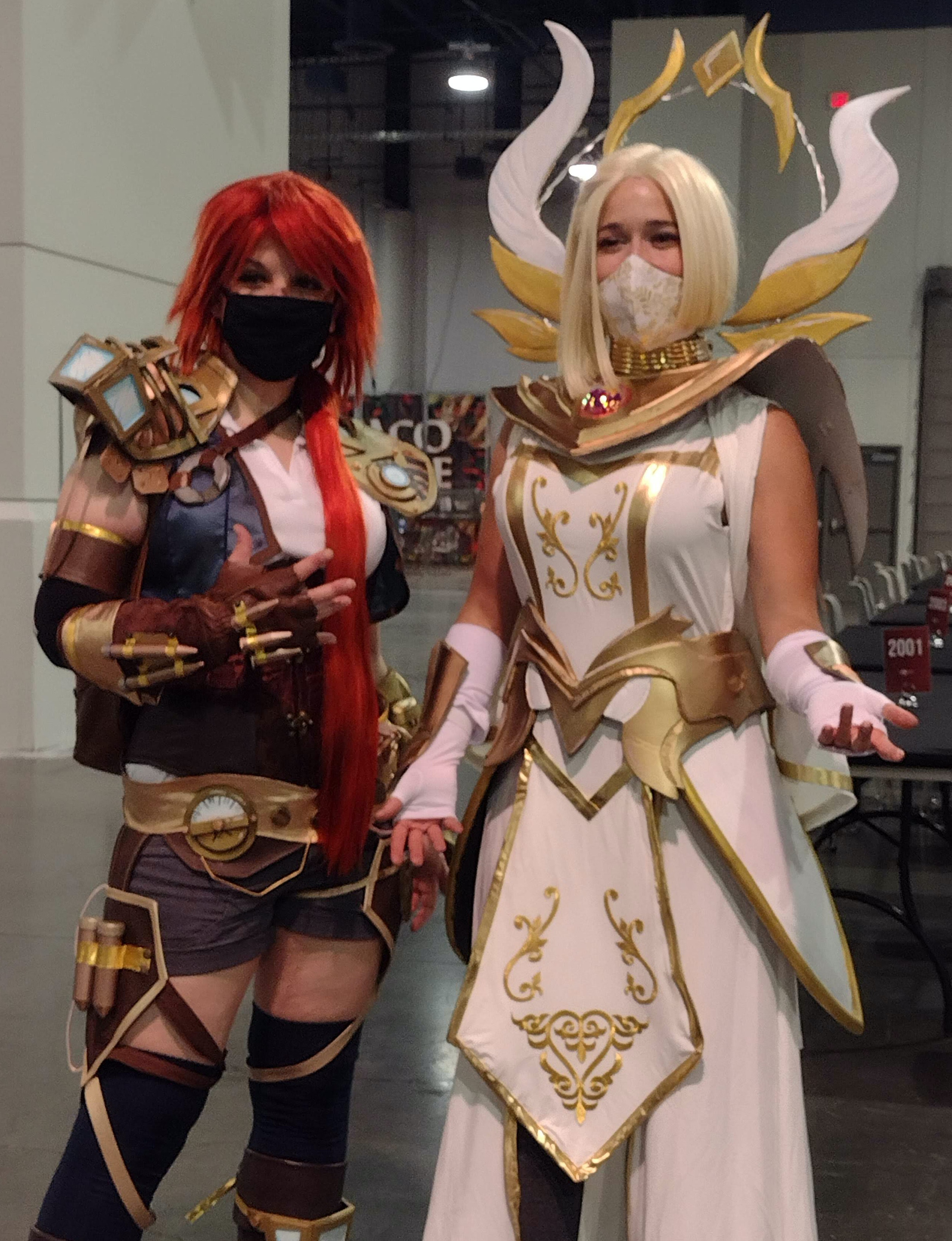 Cosplayers came out to show their support and their craft. Prism, Dorinthea, Dash, Bravo, and Katsu all made appearances. Team Covenant, Decks and Draughts, The Professor of Tolarian Community College, Tappy Toe Claws, DM Armada, Red Zone Rogue, and Kitchen Table TCG were here, to name but a fraction of the celebrity that came to The Meadows. 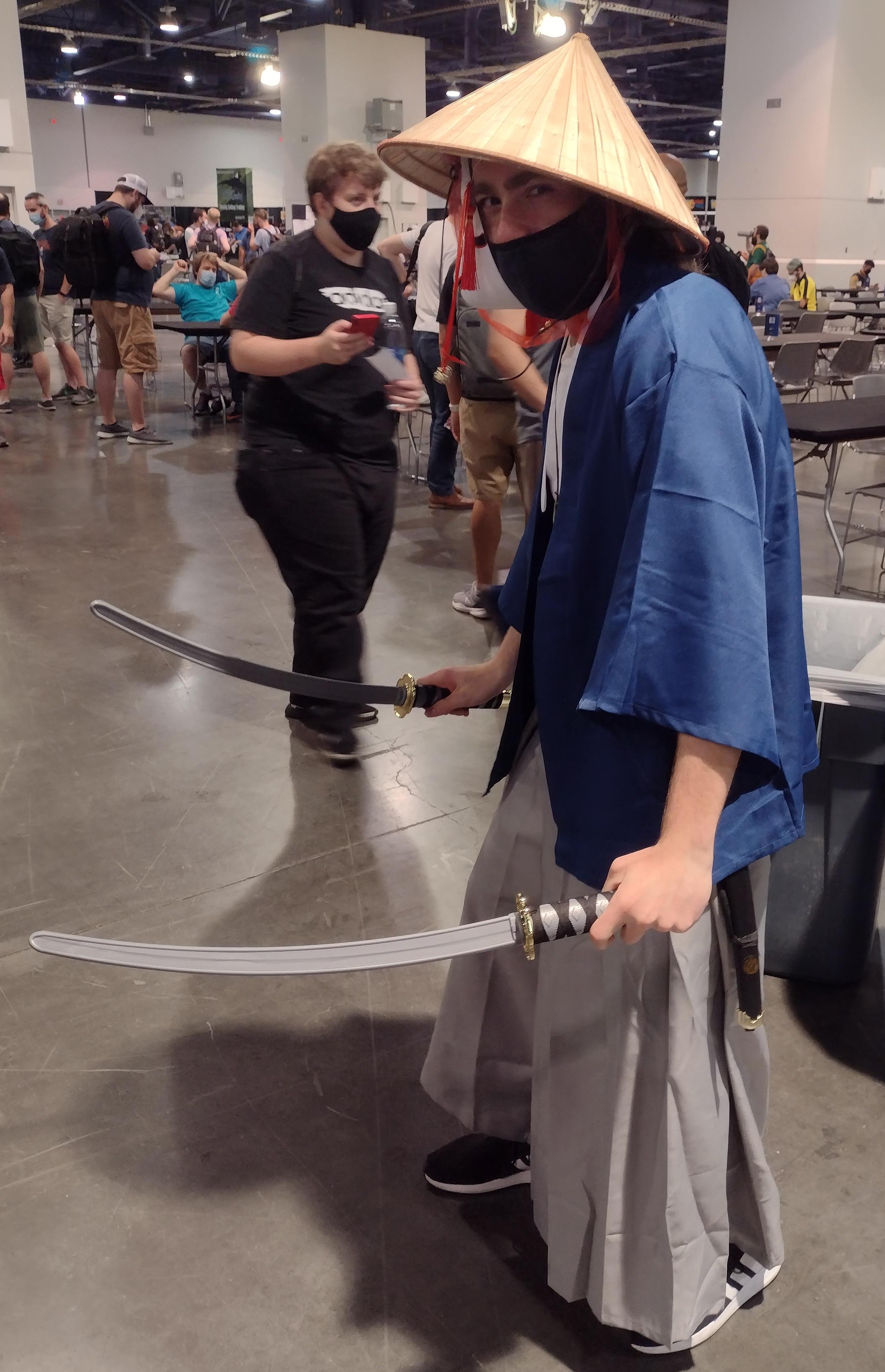 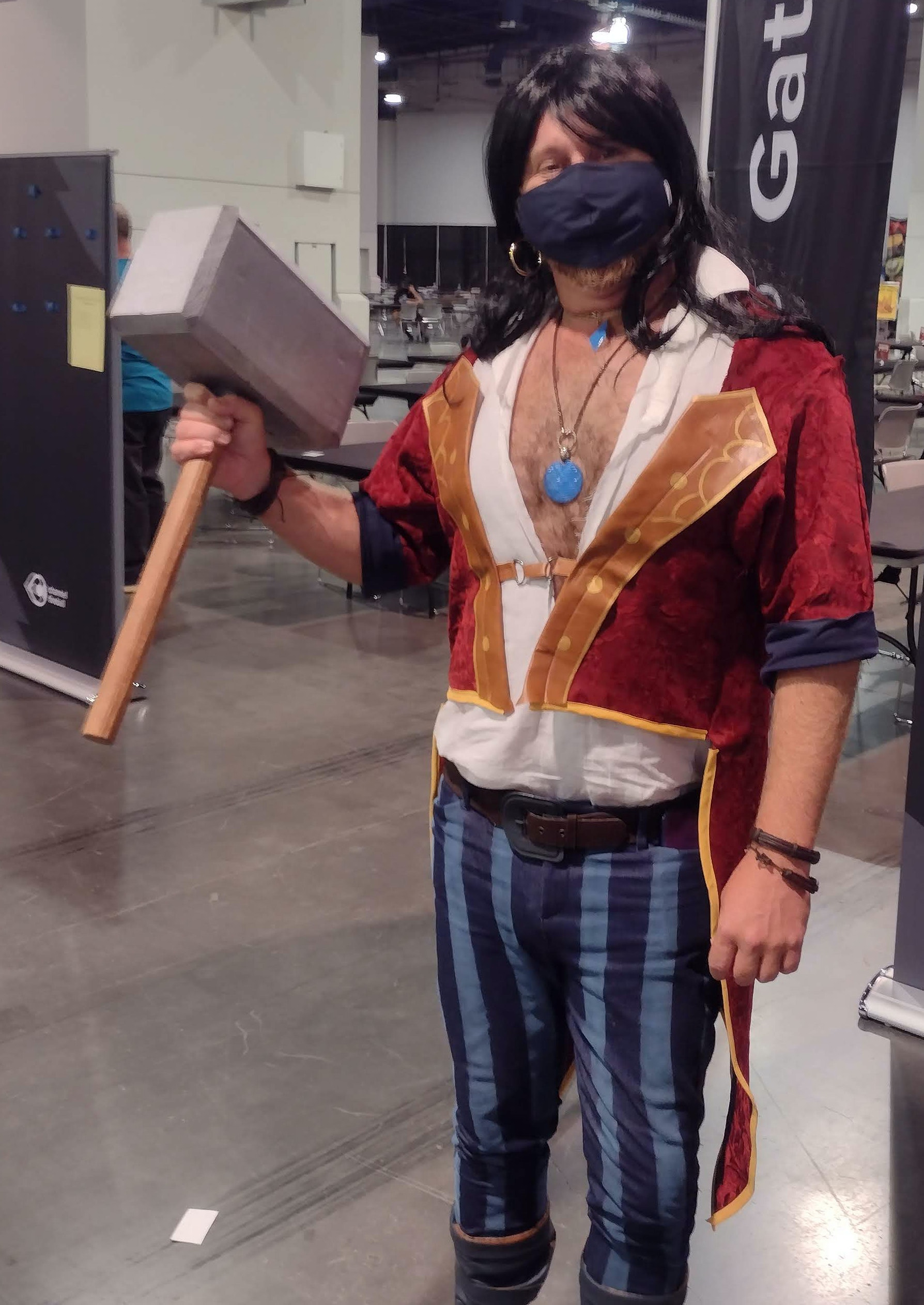 It was refreshing to see that there were people of all skill levels that came to answer The Calling. One of our contingent had played her second-ever game at the world premiere event: every opponent she faced was kind and courteous, helping her when she might have needed it.

The players- the community- really made this event the amazing spectacle that it was. There are those who would say this game is not made for a casual crowd, that it caters to competition far more than to kitchen Fables, but I would have to say that those of us at The Calling Las Vegas would have solid grounds to disagree. 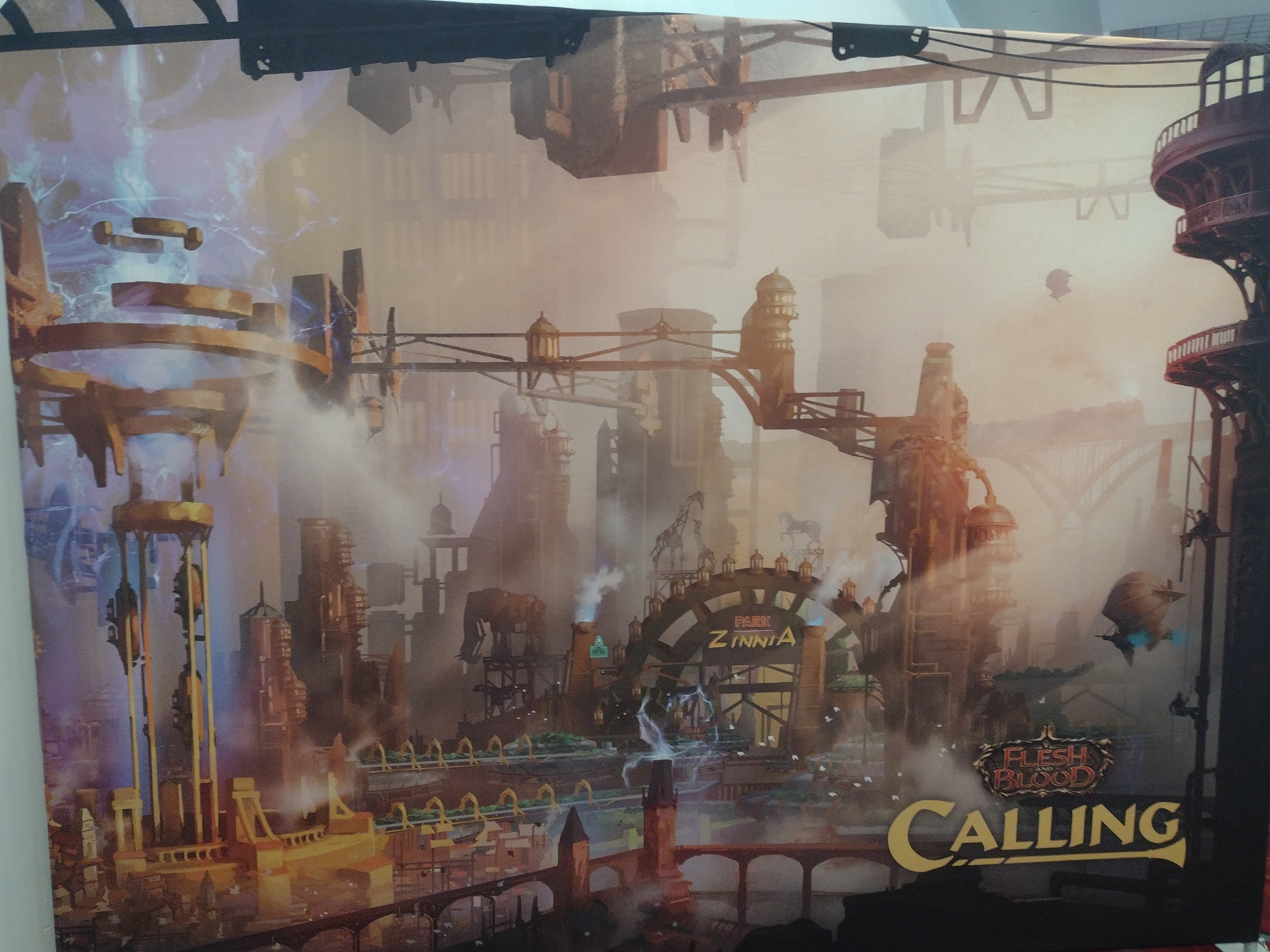 For all the good, there were areas in need of improvement. Some of the events took far longer to fire than they advertised. Take, for example, the Saturday Tales of Aria draft. It was an hour and a half before round one began; by the end of round two, 3 hours had passed. Some of the players, such as my wife, had budgeted that a three-round event of 30-minutes rounds might take a total of three hours, but here we were, three hours in, and the draft event still had another full round to go. When schedules can't be kept, there are real costs- in delayed dinner plans, missed reservations, and renegotiated priorities.

This was largely a consequence of there simply not being enough staff dedicated to making the event run like clockwork. More than one tournament staffer made it known to some of us that they were severely understaffed. Some of the staff even had to pull double duty as judges- which would be fine, if this weren't a major event where you can expect to see judges frequently being called to adjudicate the sort of situations that invariably come up at major events (missed triggers and opportunities, take-backs, illegal sequences, failures to maintain gamestate, etc). many of which were escalated to the head judge anyway.

It should be maintained that not everything that happened at the event that was bad was because of a single entity. There were many factors at play here, and although the event went on from Friday through Sunday, it did persevere as such because of the Channel Fireball staff that were on hand and their dedication to the event. One CFB staffmember with a buzzer strapped to his shoulder seemed to be running every single one of the on-demand drafts! 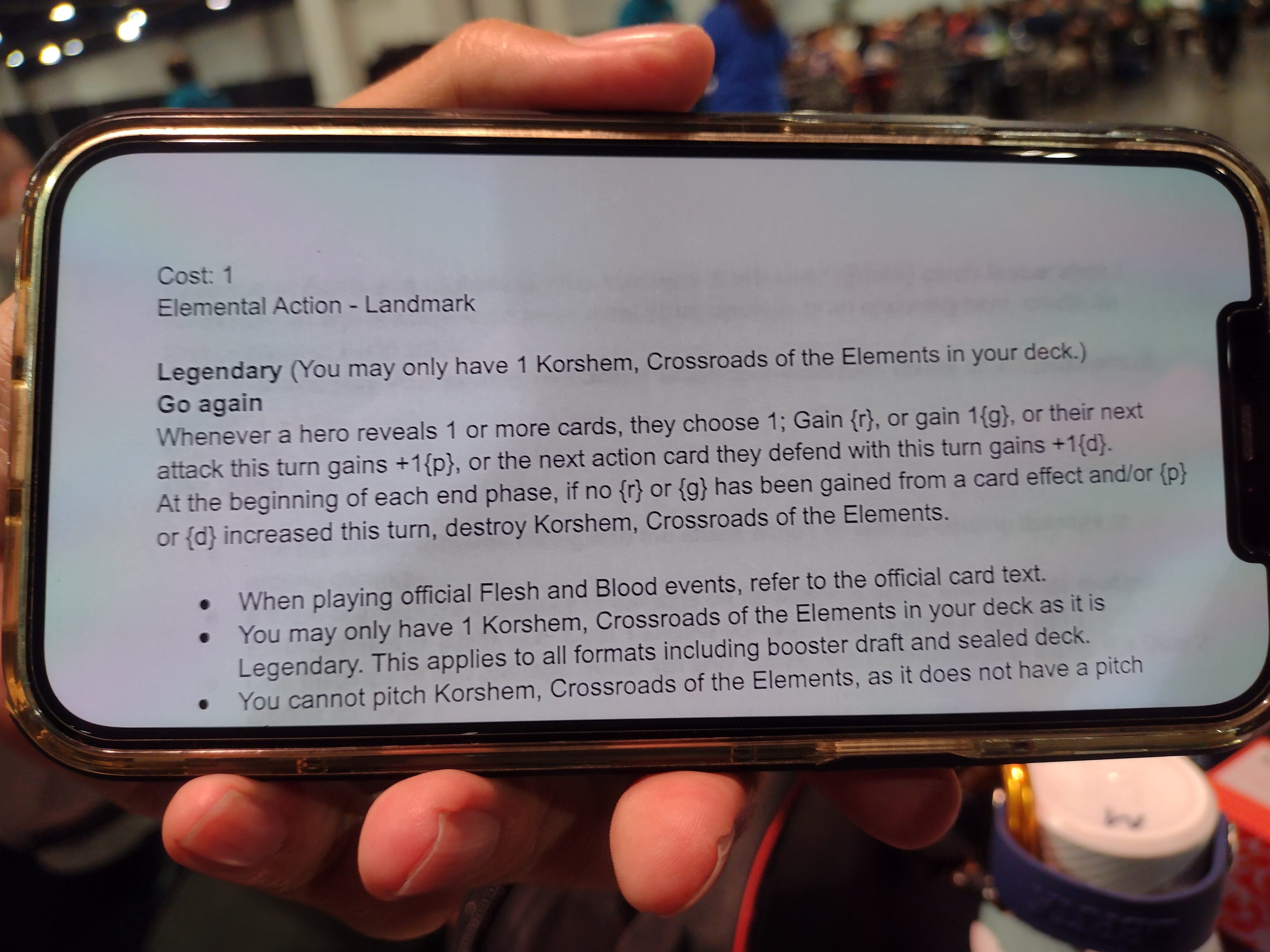 The lore-text style of Korshem's game text was, thankfully, interpreted for us on-site!

Regardless of issues such as these, the Head Judge of the event was phenomenal. They kept us updated and signposted on the integrity of the event: "play and communicate clearly" was a mantra oft heard from our Head Judge.

For all the logistical issues I mention, The Calling was not rife with problems; and although there were a lot of growing pains- this being the first event in quite some time for a lot of us, CFB included- the good thing here is that you grow out of growing pains: there are going to be many more Callings to rise to, and each one is an opportunity for The Calling to be better and better. I hope this is just the first time that I have met so many of you. Let's make all of The Callings this amazing, or better, together! 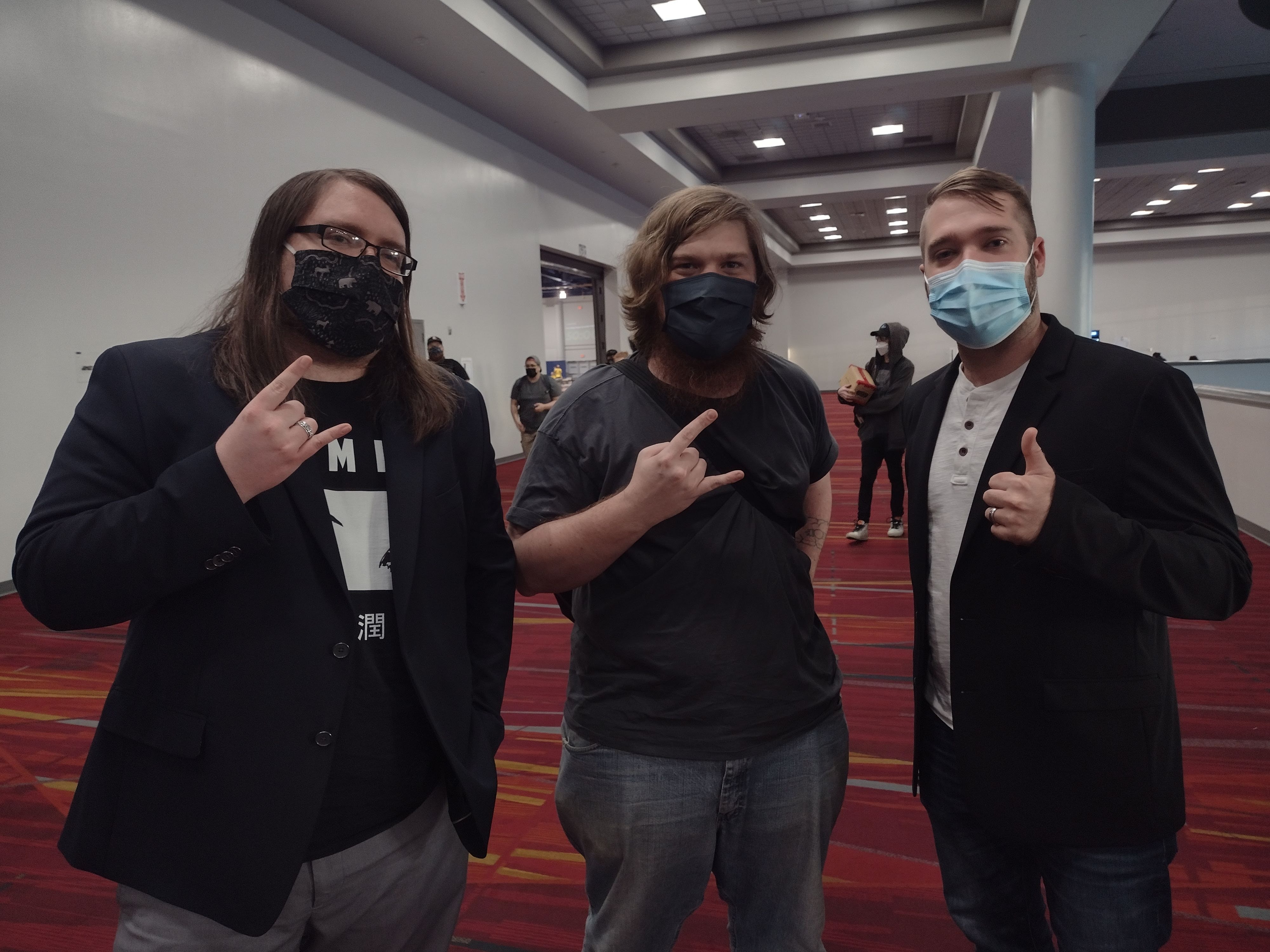 Thanks Mark, and congrats on both your Top 64 placement and your Fabled pull!

I wanted to wrap this up with a bit of my own experience watching the event streaming at home, and what I think this is all going to mean to the community. So here's your regularly scheduled Editor in Chief, Alex Truell, with some quick thoughts.

After a month of Road to Nationals events, we all expected The Calling: Las Vegas to confirm one thing: that Chane was off the hook. And as I tuned into the broadcast from Channel Fireball, that certainly seemed to be where we were headed. While Chane comprised only 22% of the field (I say only and I mean only), the feature matches- presumably chosen for who was playing and not what they were playing- could only be described as a Chane Gang.

But while many of us rolled our eyes at the lack of diversity, maybe that's what we needed to see: Chane as we all believed him to be, the oppressive master of the format. Even those new to the scene must know him by his reputation, and now we could watch the best players in North America playing him to his full potential. We understood what he could do... and slowly, we learned his weaknesses.

Perhaps Davis Kingsley said it best over at his TowerNumber9 blog when he said, "One can hardly ask for a more cinematic finale to the event." When the Top 8 saw 5 Chanes, we saw validation. When the Top 4 sat 3 Chanes, it looked inevitable. And yet, the finals saw Chane face down... Prism?

Not Bravo, who had spent August playing Whack-a-Mole with the Shadows. Not Katsu, who is never far from regaining the meta. Prism, an also-ran who was recently shown to be one of the most overplayed underdogs of the Road to Nationals series.

What does this mean for the game? It means we need to re-assess how we determine what's 'broken'. It means that players matter more than decks. It means that the meta's never really 'solved'. And it means that Tales of Aria isn't shaking up a stuck meta; now, it's fuel on the fire.

As for the community? The Calling: Las Vegas should finally put to bed the meme that 'nobody plays this dead game'. It was tired months ago, but now it just looks daft. Flesh and Blood is now legitimized.

But more than that, FaB is now local. You probably have someone in your state, maybe even at your local game store, who counted themselves among the 750 players in that tournament. That guy who won your local RtN? He was invited. You played that guy. And if you keep working at it, next time you may beat that guy. And then you get to be that guy.

Nationals showcased the diversity of the game- if you can brush away the Briars. But is the explosive growth of the newest Runeblade a sign of balance problems, or simply a consequence of online communities?

Do we really know anything about the meta anymore?

The Road to Nationals series has showcased the very best aspects of the game.