My name is Alex Truell. I'm the editor for the Rathe Times. I'm a casually competitive player overseeing the growth of a Flesh and Blood scene in Ripon, WI.

Strategically, I try not to follow trends, instead fixating on cards and tactics just outside the mainstream. I view this game through the lens of a player who cares about the competitive environment, but doesn't have to live in it; an optimist who loves the game, but can take a step back to critique it; and a deckbuilder who revels in novelty.

It was only last month when I opined that Flesh and Blood was in a wild west meta.

What a difference a month makes.

While Nationals is accurately a tournament series held in various locations around the world, it's fair to say that the specific event held in Orlando was the centerpiece. The largest event, in arguably the 2nd most established region for the game, extensively covered by Channel Fireball following several weekends of coverage of Callings leading up to it- this was Nationals in the mind of many. I spend time to establish this because establishing Orlando as the keystone also enshrines its meta in the mind of the community- and if you've been a part of the FaB community these past few days, it's extremely hard to argue that the US Nationals meta isn't being taken as gospel truth.

Prior to US Nationals, the meta had been shaped by the rivalry between Bravo and Prism. Bravo's rise began back when he was seen as a viable Chane counter; when the banning of Seeds of Agony decimated the Chane player base, Bravo simply stayed, content with his balanced-to-strong matchups across the field.

Bravo had a rival in Prism, who had managed to flip her matchup vs. Bravo by leaning into auras. This left a gaping hole in Bravo's matchup spread, one that undermined the confidence of any Bravo player looking to make a run to the top of a big event.

But as I said last time, the meta was still wide open. Bravo and Prism were both capable of losing matchups against also-rans, and there was a developing Tales of Aria meta.

Then one week ahead of the US Nationals, the UK threw us a curveball.

A Briar deck emerged that focused on stringing together wide sequences of low cost attacks and dealing damage on multiple fronts. It was the Chane recipe for success, and it targeted the two decks that held sway over the presumed Bravo/Prism meta. And, well... 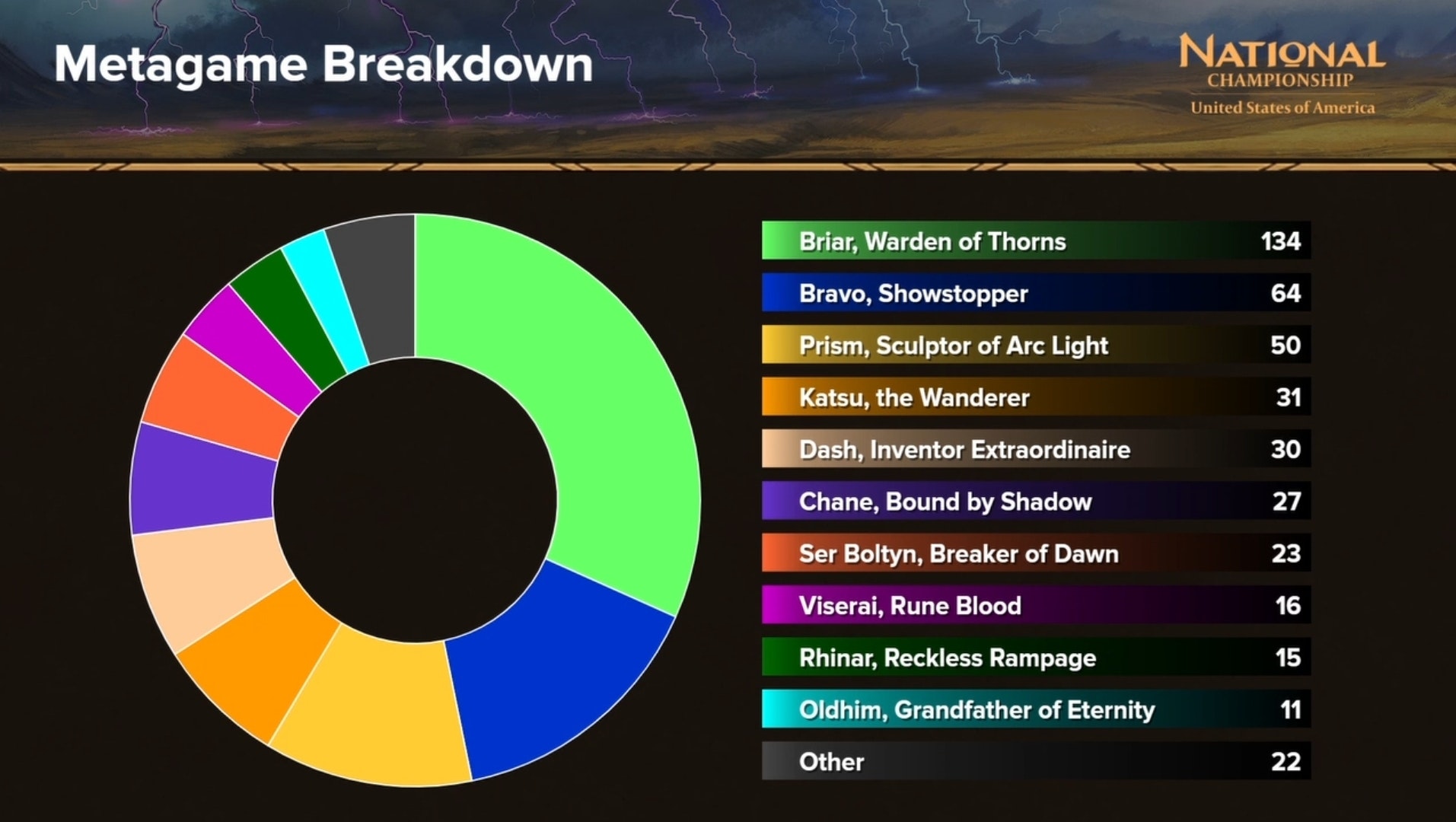 The initial response from the online community was to cry 'broken!' Obviously, Briar was just the latest in an illustrious history of overtuned Runeblades. But quantity of a deck is only indicative of popularity. Quality is determined by- 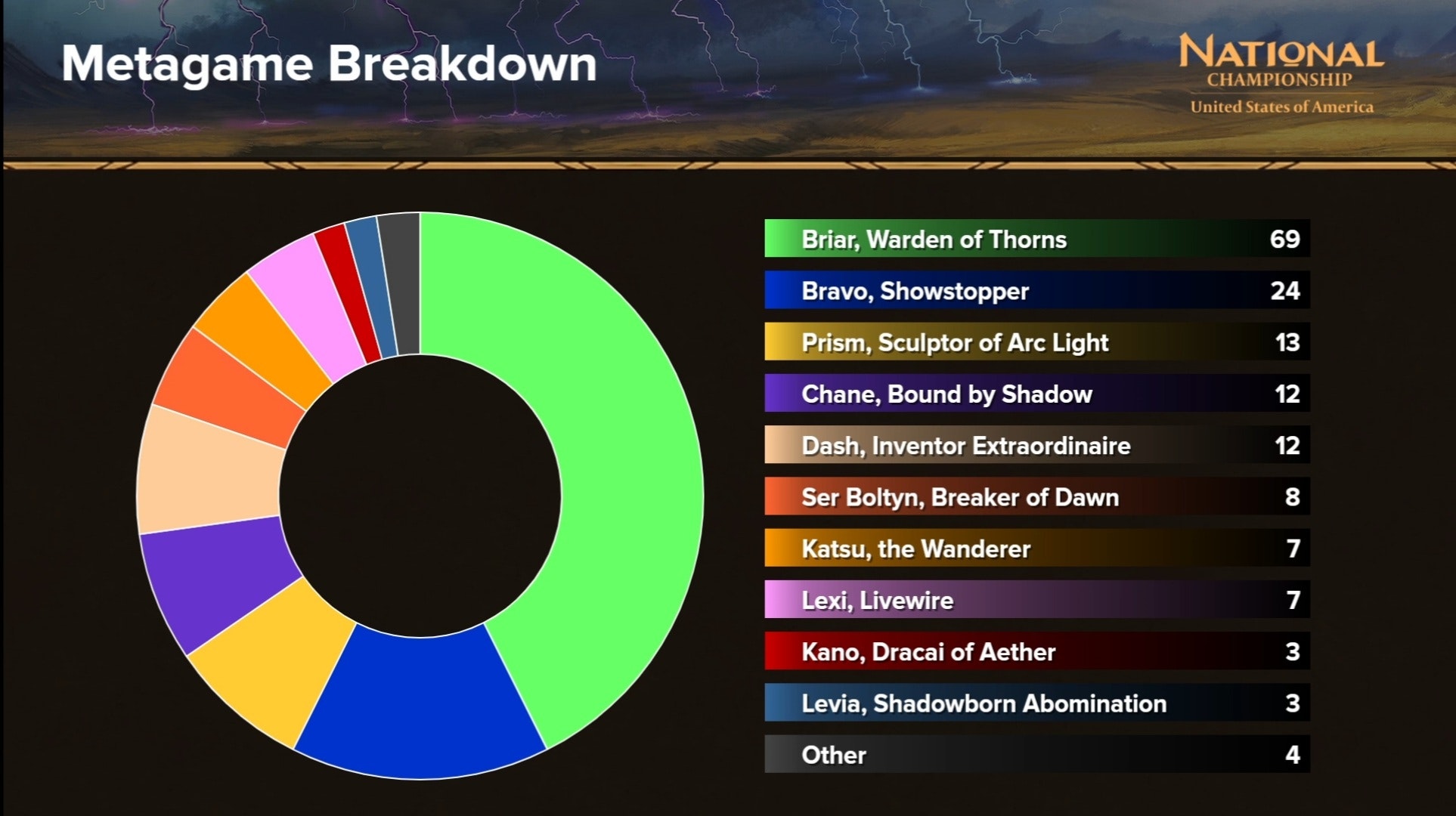 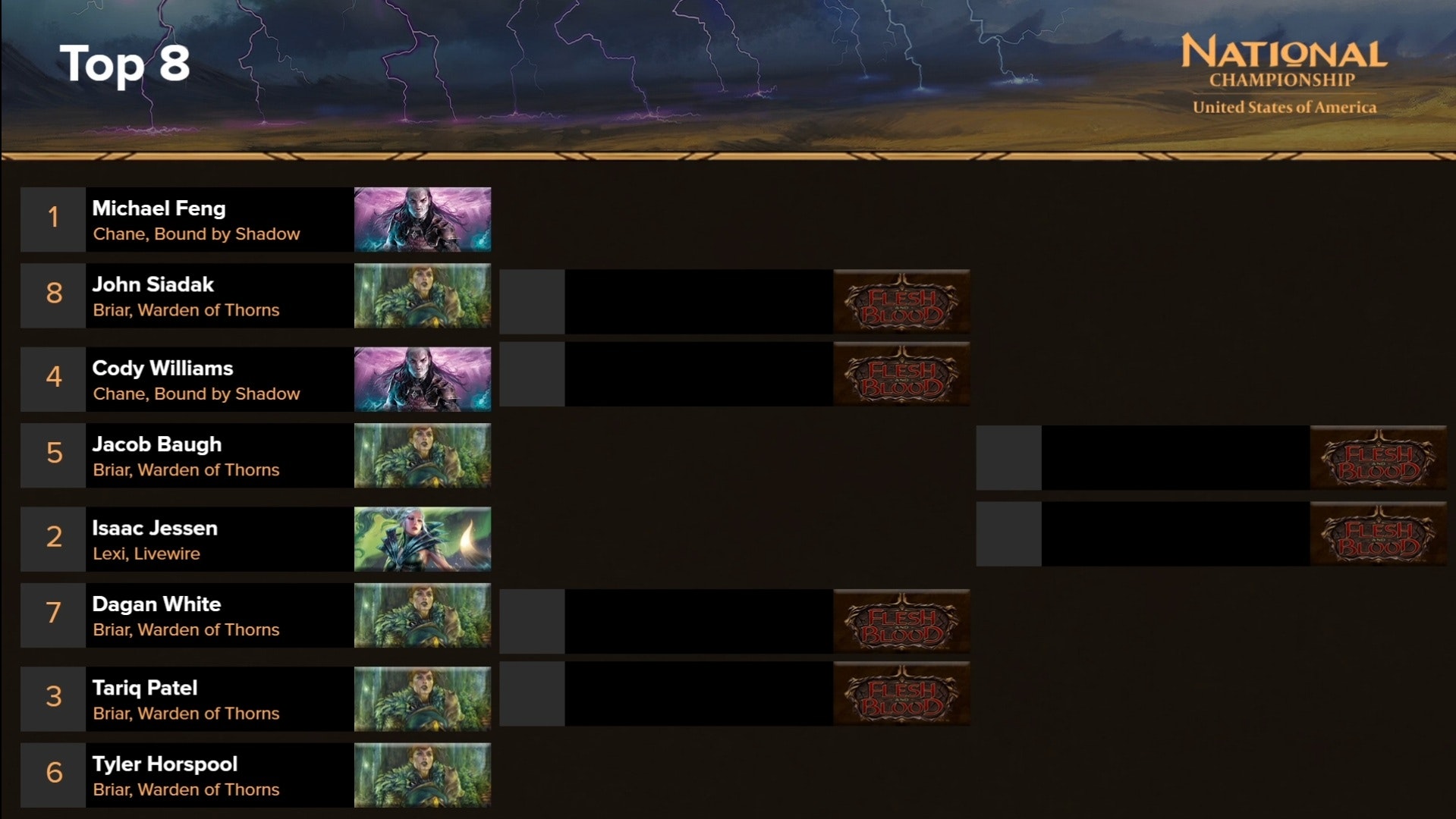 So Briar was popular. And Briar was successful. But what does this really say?

The Dream of the Balanced Meta

In a game with 15 heroes, most of us want to see all 15 heroes show up in tournament play. That's the pie-in-the-sky dream. But what would we deem 'acceptable'? Is it the variety of heroes that matters the most? Is it the ratio?

US Nationals saw at least 13 heroes represented (if anyone has evidence of Azalea or Dorinthea in Orlando, please share in the comments!) More than 10 of those heroes had positive records going into Day 2. So if the benchmark for meta diversity is 'most heroes are considered viable', well, that seems to be the case- or at least, people who have the skill to make Nationals and are invested enough to attend Nationals in Orlando are willing to bet on them.

As for ratio, well, that's a hard one, because now you're asking players to like different decks and to respond to their best guess at the meta in different ways. A popular deck may be the most powerful, or it may be the most reliable, or it may simply be the most fun in the opinion of the majority of competitive players. (This was readily apparent while Bravo sat atop the meta; many players are simply not fans of the Guardian playstyle, and so Bravo seldom holds a bulk share of the meta.)

You cannot create an environment in which 15 heroes each hold 7% of the pie.

To be fair to the US Nationals meta, those of us watching the streamed matches saw an incredible variety of decks doing amazing things. Alexander Vore's Kano put on a show against Chane that proved 30 health isn't a deal breaker. Ethan Van Sant helped us live the Levia dream- and feel the crushing weight of blood debt finally come due. And Spencer Freeman gave us an early taste of Lexi's true potential, only for Isaac Jessen to pick up the baton and carry Lexi to a Top 8 finish. (It was the Three of a Kind fail felt round the world!)

While we dream of a balanced landscape, all we can realistically expect is viable options- and which options players choose are their own. Sometimes those choices will skew in one direction, and that's outside the control of game design. It does not inherently represent a failure.

'Cheerio' Briar (US Nationals winner decklist linked) was an eleventh hour sensation, a deck that successfully attacked the meta as it had existed immediately before it arrived on the scene. Any competitive player looking at the emergence of Briar saw that Bravo and Prism were going to fall to it. That means if they were playing Bravo or Prism, they needed to change decks or risk 100% preventable failure. If you were a deck countering Bravo or Prism, you now had to consider whether you countered Briar, because Bravo and Prism were likely to make up significantly less of the population. Briar counters had not been explored. There was little time for testing.

So do you chance it with an under-tested deck? Do you stick with your build and simply hope you weather this shift in the meta? Or do you join the bandwagon and hope that, like you, the majority of the field hasn't had time to figure out the counter yet?

I would not be surprised at all to see Briar begin to wane immediately. 3 days of tournament play with and against Briar has surely exposed her weaknesses to the top tier players in the game. While some will stick with what works and some will refine what didn't, others will take that experience and craft a counter, targeting the overgrowth they expect to see. And there are most assuredly counters- remember, Tyler Horspool successfully took the Las Vegas Calling with Prism in the height of Chane's dominance.

The Elephant in the Room

I believe that a large part of the knee-jerk reaction to Briar is Chane's fault. When Briar was revealed as the third hero in Tales of Aria, there was immediate backlash due to her Runeblade affiliation. Her go-wide, who-needs-resources playstyle evoked the worst excesses of the Shadow style. And her use of arcane- and now 'pure'- damage created the appearance of non-interactive gameplay.

What's more, when you evaluate by class, 7 of the Top 8 decks were Runeblade (and all 8 had talents, but that's not a talking point- yet). Clearly there is something going on in that class.

This, I think, is the true State of the Game question to be examined.

But to be clear, while arcane damage has few options for blocking, many classes have similar options available to them- namely, damage that is hard or impossible to block. Dominate is regularly cited as an example, but there's also Intimidate, attack reactions, wide attack patterns, and damage dealt on the defensive. There are few classes incapable of forcing damage through via some trick or tactic.

Is Runeblade, with its frequent split damage types, simply too effective at it? Is their card pool better than other classes? Or do they simply have a playstyle that many players gravitate towards?

Attention is always directed toward the new and the next; and as many have pointed out, Runeblade has gotten significant attention in all the recent sets. Will a new supplemental set renew interest in some of the classes of the past? Would a new core set release without a Runeblade hero push the class to the backburner?

Ultimately, we can do nothing but speculate at this point. We need time to develop decks to respond to Briar. Then we need to see if those decks succeed. Concurrently, we'll witness whether Briar's popularity grows, or if the novelty has worn off. There are too many factors at play right now to determine any causes for what we saw at US Nationals. We simply know that many skilled players chose to play Briar, and that many skilled players won with Briar. Anything more than that is mistaking correlation for causation.

Competitor in the Orlando Nationals here. I didn't catch his name but there was a Dorinthea player on day 2. He was at the top tables and was crushing briars by playing a go-wide strategy that included scar for a scars, exudes, and Enlightened strikes.

Briar is very strong, and Lightning Briar in particular seems to have the upper hand in aggro races (at least against any hero not named Chane). I think people underestimated just how much of the US Nationals meta would gravitate towards Briar and didn't reconfigure their sideboards enough to combat it, but it's not without weaknesses. Frost Lexi can shut it down, Kano can outrace it, and Bravo and Oldhim both have the tools to fatigue it. The split damage issue is something I don't think is inherently problematic, but it's rough when you need to run AB1 + Skullcap to have the means to reliably stop their arcane, and Skullcap doesn't let you stop 2 arcane efficiently, plus your opponent can intentionally take enough damage to turn it off. The split damage question would look more like a feature than a bug if "Plunder Run from arsenal, Nimblism, Lightning Surge with Go Again" wasn't so potent up front.

The Nationals circuit has shown that the original heroes of Welcome to Rathe and Arcane Rising still have what it takes to compete- and the wisdom of a non-rotating format.

Prism exemplifies what Living Legend is supposed to be.

Does the grandeur of the Illusionist aesthetic cause an imbalance in the game's collectibility? And proudly introducing our new Player's Guides section!