My name is Alex Truell. I'm the editor for the Rathe Times. I'm a casually competitive player living in the U.S. who was fortunate enough to come across Flesh and Blood before Crucible of War (and therefore, before the game exploded in value). I was hooked fast in no time.

Strategically, I try not to follow trends, instead fixating on cards and tactics just outside the mainstream. I play Cintari Dorinthea, Boost Dash, and continue to explore Bravo Encore builds (somehow I'm gonna get 2 attacks out of Bravo!)

Thoughts and Baubles is an editorial space for the Rathe Times, where I discuss the game and respond to the community. Now that you know a bit of my background, you can view my thoughts through the proper lens. As a player who cares about the competitive environment, but doesn't have to live in it. As an optimist who loves the game, but can take a step back to critique it. And as a deckbuilder who revels in novelty.

I feel like I've re-calibrated my understanding of Shadow and Light a dozen times in the last few days! (If you've been living under a rock, check out our Previews hub before proceeding, or this won't make a lot of sense to you.) I won't confuse you with my incorrect assumptions along the way, but here's what we arrived at: in addition to Classes, there are Talents.

These are pretty easy to understand. Just like your Hero needed a 'Brute' tag to use the Brute card pool, now your Hero would need the 'Shadow' tag to use the Shadow card pool. Notably, talents are not being added to any of the previous Heroes; despite their matching frames, Dorinthea, Shiyana, and Viserai are not gaining access to Light and Shadow cards. 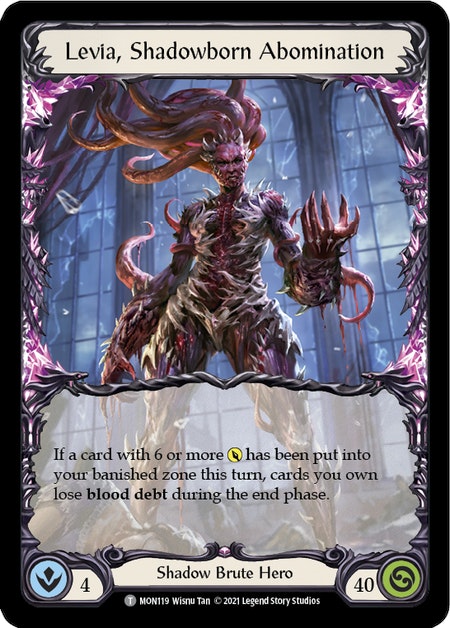 That brings us to Levia, the Shadow Brute. As a Brute, Levia is introduced with a full card pool behind her. As a Shadow Hero, she brings with her an exciting new array of cards. And on top of that, we've been seeing cards that are specifically Shadow Brute stamped, which has caused some to wonder aloud, "How is this fair to Rhinar?"

We've seen this in miniature with Crucible of War's Blitz Heroes. These new characters lacked access to the Specializations that the Original 8 had (with the notable exception of Ira). And a strong case could be made that their lack of access to the full card pool of the class held them back- Kassai, Kayo, Benji, and Data Doll all struggled to find a place at the table, and none achieved the success that their mainstream counterparts were able to.

Does that mean that Rhinar needs to sleep with one eye open? He will, after all, be completely locked out of the Shadow Brute cards, even if you don't consider the Shadow suite to be part of the equation.

This is where strategy and deckbuilding come into play.

When you look at Levia's ability, it's quickly apparent that you have to use Shadow cards. Without those, you're just using a blank Hero. And from everything we've seen so far, the Blood Debt mechanic Levia endorses is far from a side quest. If Blood Debt is built into your deck, you're thinking about it every turn.

Levia is likely to look at a Rhinar deck and find it wanting. There's very little that Rhinar is doing with those cards right now that she can make use of. On the other hand, the Brute cards that get added to this set in support of Levia are fairly likely to serve Rhinar's interests too. And he was already fairly satisfied with what he had going for him.

Perhaps the better way to look at the Talented Classmates is as Heroes splitting their attention.

A Warrior is focused, and she does her thing precisely using a card pool honed for that particular strategy. A hypothetical Light Warrior is diversified, using some of the skills they learned from one allegiance and some from another, in pursuit of an entirely different strategy. It's not all that different than Pistol Dash vs. Boost Dash; both have interest in drastically different cards from the card pool, with common ground found in the middle.

If you're a fan of the deck you have, I see no reason to fear your Hero is about to become obsolete.

Unless you main Azalea. 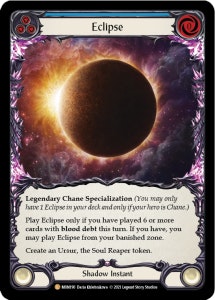 Speaking of Shadow, we've seen two Legendaries so far, and quite unexpectedly, they're not Equipment. These Specializations are actual in-your-deck cards (everybody cringe at the thought of shuffling valuable cards), and whether or not they become essential to their respective Heroes' strategies remains to be seen.

But what does it mean that 2 of our 6 Legendary cards are Instants? Should we expect Light to similarly have non-Equipment Legendaries? What sort of precedent is being established here, and is it good for the game?

Let's start with the why. After seeing the game design of Levia, it's become clear to me that LSS intends to spare us the hunt for more Legendary gear just to properly dress our new Heroes. Levia joins the game with Scabskin Leathers, Barkbone Strapping, and Skullhorn already available to her. And I have to assume this set will have options intended for her, using either- or both- of her allegiances. Even if 2 of the Legendary slots are given to Shadow Equipment, she may very well be content with the gear that already exists.

Going forward, what I hope this means is that new Heroes will be designed with only 1 new Legendary firmly in their card pool- just like the Original 8 had an associated Legendary each. That allows a player to focus on one class, and after tracking down one extremely rare card they feel like they have a complete card pool.

If the game is going to continue with this trend of building on the classes that already exist, I believe this is the way to go. A missing Legendary Equipment can have a big impact on the competitive prospects of some decks, and if new Heroes need their new Equipment plus the Legendaries from older sets to do their best, that becomes prohibitive fast.

If the game is going to continue with this trend of building on the classes that already exist, I believe non-Equipment Legendaries are the way to go.

A Legendary that goes into your deck, however strong and impactful it may be, is ultimately at the mercy of being shuffled to the bottom at the start of the game, and may never get played; the lack of it isn't felt to nearly the same degree. You'll have to come to terms with shuffling a Legendary on your own.

Community is something I want to intentionally focus on in these editorials, and this is a critical time for such a focus. Simply put, I believe the next few weeks are an ideal time to pitch this game to a friend. Here's why.

I believe the next few weeks are an ideal time to pitch this game to a friend.

Last week, a game shop within 200 miles of me posted that they were going to hold a Monarch Pre-Release. I was aware that this shop has been stocking Flesh and Blood, but with all the uncertainty of in-person play during the pandemic in the US, I wasn't really expecting an event. Being fortunate enough to have COVID-19 immunity on the near horizon, I immediately made plans to attend.

That's when it struck me: I had spent the last year getting sucked down the FaB wormhole alone in my home. But the world was opening up before me, and pretty soon I'd be seeing my gaming friends again. This was an opportunity to sell them on the game, bolstered not only by the excitement of a brand-new set and rare access to 1st edition cards, but also by the long-awaited return to society!

Flesh and Blood is an elegant game. The mechanics are smooth and streamlined. I've taught my 8 year old daughter to play. But there's potential that Monarch may complicate it. Let me rephrase that: like all expansions to a TCG, Monarch will complicate it. That's not a bad thing. But when you're new, one more thing always runs the risk of being the thing that overwhelms you.

So I say now is the time to demo this game. Your decks are stable and refined, the Tabletop Simulator mod is up to date, and the FaB community online reinforces the excitement you want your new recruits to feel.

The end of my story is, I contacted 2 friends who had shown some interest in FaB over the past 6 months. Previously, I'd had to tell them, "Hold off, availability is a problem right now and we can't get together in person anyway." Now I was telling them, "There's an event in a few weeks. Let's get you ready."

We all 3 met up on TTS on Sunday night.

1 of them bought a box of Arcane Rising today.

The other is joining me at the Monarch pre-release.

He's looking at bringing his brother.

Rathe Times contributors in real life! And we look at preparing for new players in the wake of increasing exposure.

LSS has charted a bold path forward for Flesh and Blood- and it's perfect for preserving your local play group.

Your local FaB scene is a treasure. Don't spoil it.